LKQ Corp to by Italy’s auto-parts distributor Rhiag for 1.04 bn $ 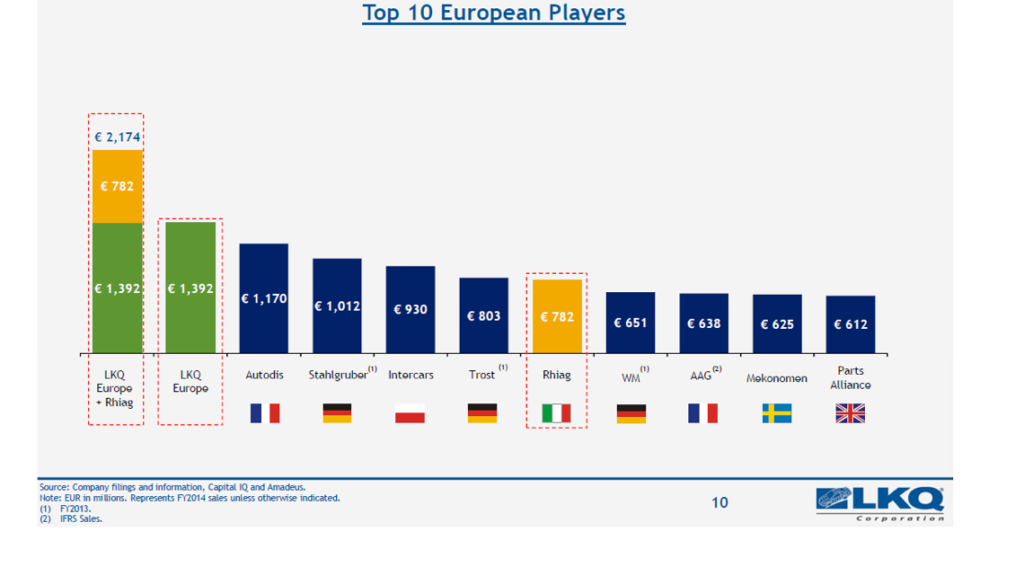 Nasdaq-listed LKQ Corporation will buy Italy’s Rhiag Group spa for an enterprise value of  1.0375 billion euros. Rhiag is a leading pan-European business-to-business distributor of aftermarket spare parts for passenger cars and commercial vehicles, which has been controlled by Apax Partners since October 2013.

Rhiag actually announced yesterday it had withdrawn the request for admission to listing of its ordinary shares on the Mercato Telematico Azionario organized and managed by Borsa Italiana  and the request for approval of the prospectus for the admission to listing on the MTA of its ordinary shares (download here the press release) both presented last November (see here a previous post by BeBeez).

Apax too announced it had signed a binding agreement to sell its stake in Rhiag’s capital (download here the press release).The transaction is expected to be completed early in the second quarter of 2016  Financial advisor to LKQ for the deal is BofA Merrill Lynch, while JP Morgan and Ubs support Apax and Rhiag.

LKQ is a leading provider of alternative and specialty parts to repair and accessorize automobiles and other vehicles. The group has operations in North America, the United Kingdom, the Netherlands, Belgium, France, Scandinavia, Australia and Taiwan and reached 7.1 billion dollars in revenues in the trailing 12 months ended on Spetember 30th 2015.

Rhiag’ s enterprise value of 1.0375 billion euros represents a multiple of 10,6x expected FY 2015 ebitda which is about 98 million euros (download here LKQ investors’ presentation). Rhiag reached 882 million euros in revenues in the last 12 trailing months to September 30th, which means that the new group had pro-forma consolidated revenues of about 8.1 billion dollars in the period.

Rhiag reached 781.7 million euros in revenues in 2014 with 88.7 millions in adjusted ebitda, while the nine months ended on September 30th (download here Rhiag investors’ presentation) were closed with 670.3 millions in revenues (+17.7% from the nine months 2014) and 80.5 millions in adjusted ebitda (+21.9%). Moreover Rhiag issued two bonds for a total of 465 million euros in 2013 and 2014 to finance Apax’s 2013 buyout and the acquisition of the Italian distributor Era in October 2014 (see here a previous post by BeBeez).

LKQ intends to initially finance the acquisition with borrowings on its revolving credit facility and the assumption of Rhiag’s indebtedness while in the next future it will refinance the deal with bonds and new credit lines. As of September 30th,  the company had approximately 1.3 billion dollars of available borrowing capacity on its credit facility.

A dual track process has been ongoing since last Summer for Rhiag and last October some private equity funds such as  Blackstone, Bain Capital, Carlyle and Permira  were rumored to be interest in the deal (see here a previous post by BeBeez).

Apax bought Rhiag in 2013 from Alpha Private Equity, which had been joined by Alpinvest,who in turn had bought the company in 2007 from Cvc Capital Partners.