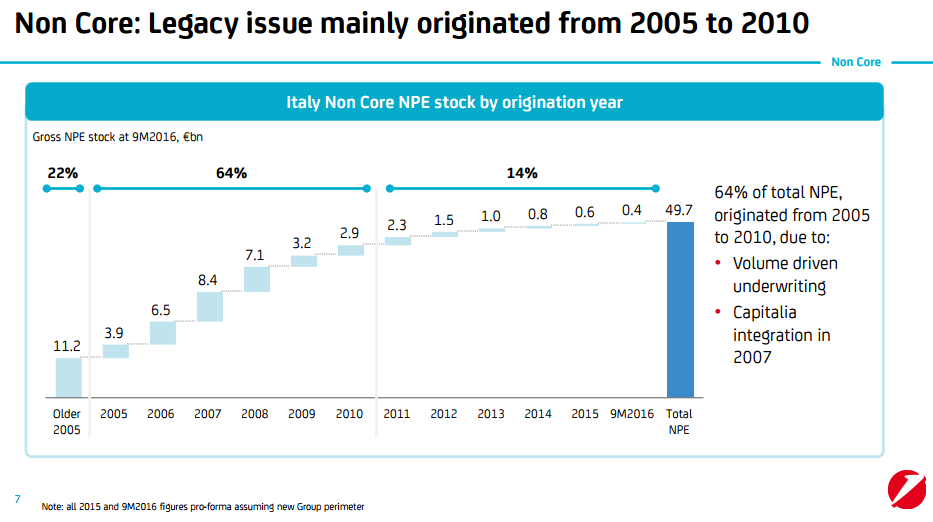 After rumors have been recurring in the last few weeks about a mega-securitization deal by Unicredit, ceo Jean Pierre Mustier revealed yesterday the details of the securitization plan in the framework of the bank’s new strategic 2016-2019 plan and together with a 13 billion euros recapitalization plan.

First of all it was clear that the 20 billion euros of bad loans that were said to be securitized (see veda here a previous post by BeBeez) are instead 17.7 billions and they are net of devalutions. Moreover those loans are part of a so-called non-core loan portfolio that wast separated back in 2013 on a risk-return basis.

The 17.7 billion euros bad loan portfolio will be vertically sliced into two portfolios which are to be sold to two separated securitization veichles built, respectively, by Fortress Investment Group and Pimco , with Unicrdit retaining a minority stake in each veichle that will be separately managed by Unicredit’s business partners. Advisor for the deal, named Fino, are Unicredit Cib and Morgan Stanley for Unicredit and Mediobanca for Fortress (see here the press release).

Mr. Mustier said that “we are deploying incisive measures to face legacy problems and strengthen the bank’s risk profile and future profitability”. 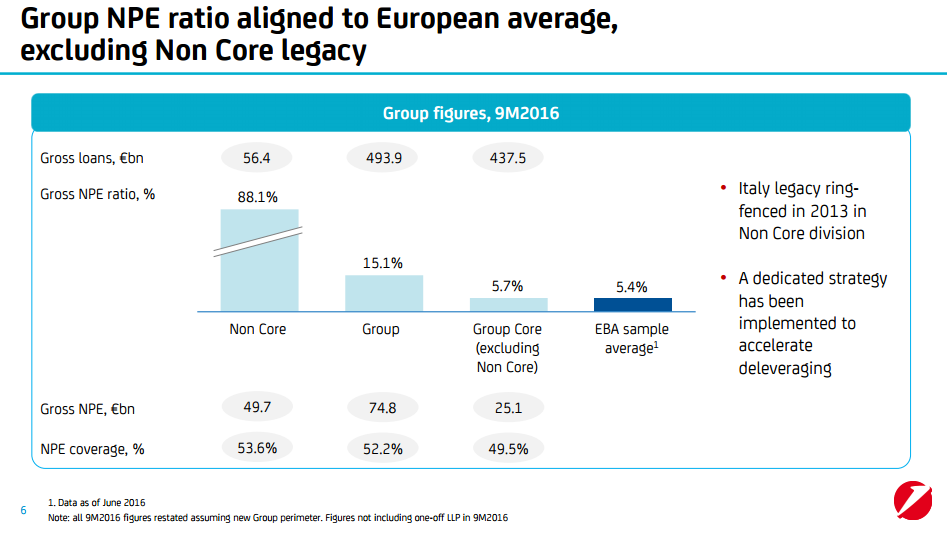 Total non-core loans were 56.4 billion euros at the end of last September of which 49.7 billions were impaired loans. Among them 22% have been originated before 2005 while a 64% have been originated between 2005 and 2010. That is why, when you consider just non-core loans, total NPE ratio was 88.1% on Sep. 30, while considering both non-core and core loans (for a total consideration of 74.8 billioneuros), NPE ratio is lower (15.1%) and comes down to 5.7% (with a 52.9% coverage ratio), showing that actual credit issuing approach is much more efficient now than before and much more in line with the European average of NPE ratio that is 5.4% (see here the assset quality presentation by Unicredit’s credit risk officer, Massimiliano Fossati).

Coming back to non-core loans portfolio, 12 billion eurros out of the total 49.7 billion euros gross impaired loans are unlikely-to-pay loans (covered already at a 42.8% rate) while 37 billion euros are bad loans (with a 77.1% coverage rate, which means a 23% average pricing). Those 37.1 billion euros include the 17.7 billion euros of bad loans to be sold to SPVs controlled by Fortress and Pimco. 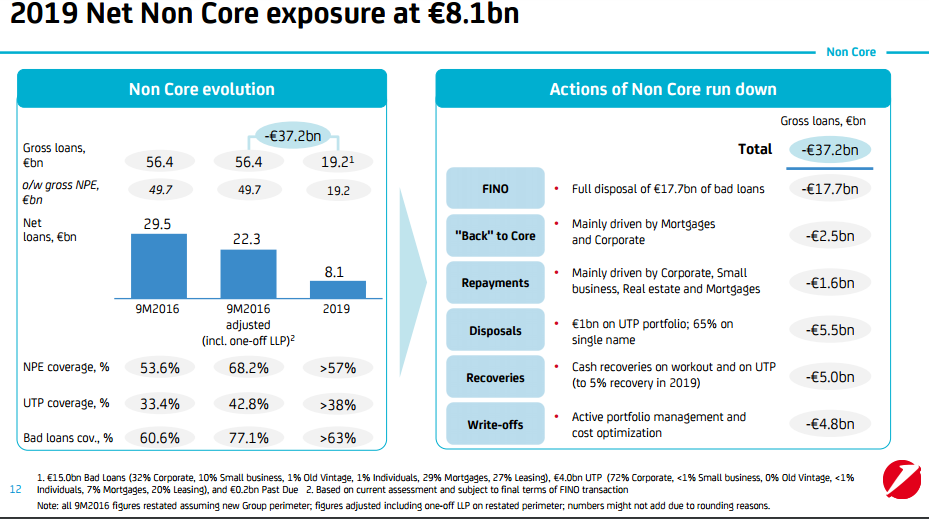 Sale of the 17.7 billion euros bad loans portfolio will help Unicredit to cut gross non-core impaired loans from 56.4 billion euros last September to 19.2 billions. Other actions to run non-core loans down will depend on the capability of making some mortgages and corporate loans to come back to core, on repayments of some loans, on cash recoveries on workout and on unlikely-to-pay, on active portfolio management and cost optimization and disposal of bad loans and single name unlikely-to-pay loans (after the bank has been sellling 8.8 billion euros already of Italian bad loans and utp since 2013, a figure that might reach 12 billion euros considering impaired loans sale by the whole bank) maybe in joint venture with specilized investors (as it was the case with Pillastrone Italy and Idea Capital Partners  sgr for single names utp loans or with Pimco for a real estate portfolio named Sandokan).