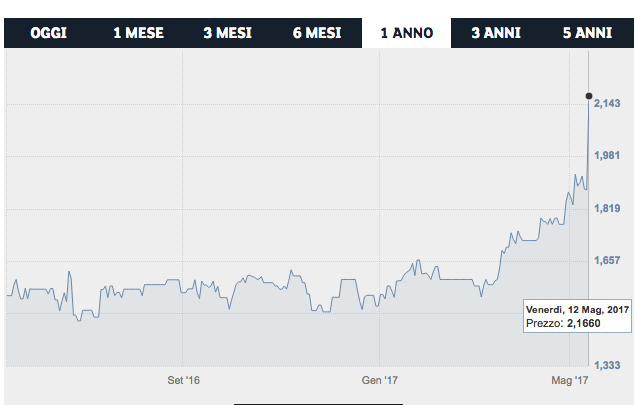 TBS Group, a company listed on Aim Italia, specialized in the design and the management of outsourced clinical engineering services and in the supply of integrated Ict solutions, informed last Friday May 12th that is going to be a target of a voluntary and total public purchase offer by Double 2 spa, an investment veichle indirectly controlled by Permira funds (see here the press release).

The news come out early in the morning last Friday and the Tbs stock finally closed with a 15.5% jump at 2.168 euros per share at the end of the day, after having reached 2.19 euros, just under the 2.2 euros per share offering price, which includes a 17% premium on May 11th closing price and a 29% premium of Tbs’s average price in the last 12 months. The offer will be effective if Double 2 will reach ownership of at least a 50% plus one share in Tbs group.

If all shareholders are accepting the tender offer, the deal will be valued 92.8 million euros. More in detail, the offer which aims at the delisting of the company, will be launched by Double 2 soa, which in turn is controlled by Double 1, which is owned by Panthelux, an investment veichle controlled by Permira with a 90.37% stake and by managers of former managers of Pantheon group with a 9.63% stake. Pantheon is active in 15 countires in the biomedical technology sector and the tender offer aim at developing the group outsourcing activities in the medical sector both in Italy and abroad.

First quarter results were approved last May 11th and showed 49.7 million euros of consolidated revenues (+6.9% from Q1 2016) and a 4.8 million euros ebitda.

In October 2014 Tbs listed a 15 million euros minibond on the ExtraMot Pro market maturing in October 2018 and paying a 6.5% coupon.