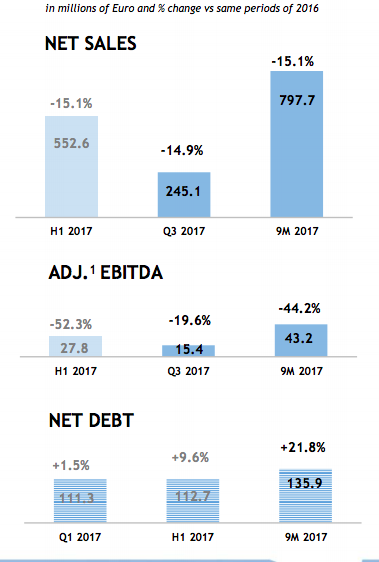 Safilo closed with a 3.13% gain yesterday at the Milan Stock Exchange at a price of 5.28 euros per share, after having reached an 8% gain during the morning toward 5.5 euro per shares. The reason of the sprint for the stock of the second leading eyewear maker in the world after giant Luxottica-Essilor was an article by  Affari e Finanza La Repubblica newspaper saying that Safilo might be a target for private equity funds or fashion groups or that Hal Holdings, now the major shareholder with a 41% stake, might decide to takeover the whole group as Richemont did when it decided to buy the 51% stake in Ynap that it did not own yet launching a tender offer on the stock.

Hal Holding, which is controlling Safilo since December 2009, after a tender offer on Safilo’s bonds and a recapitalization of the group, said yesterday evening with a note that at the moment it is not willing to raise its stake in Safilo. However the stock remains under observation by investors and analysts.

Meanwhile, as for the licences, Safilo will loose the ones by Kering (Gucci, Saint Laurent), ha lost Lvmh‘s Celine and is risking the renewal of Lvmh’s Dior,  Marc Jacobs, Fendi and Givenchy as Lvmh has joined forces with Safilo’s competitor Marcolin  (see here a previous post by BeBeez).