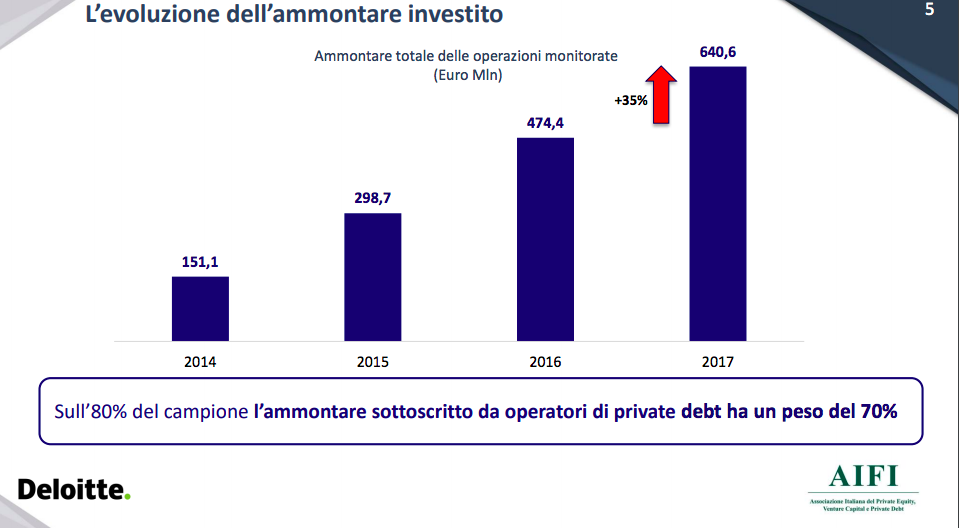 A roundup on the activity of Italian private debt market  starts today in this English section of BeBeez. The release of similar roundups about the activity of venture capital funds will take place on a weekly basis. Todays’ round covers a period starting on Jan 19th till Feb 6th 2018.

According to a report of Aifi, the Italian association of financial investors, and Deloitte, published a few days ago last year 82 Italian companies (53 in 2016) attracted investments of domestic (67%) and international private debt funds (33%) worth 640.6 (474.4 in 2016) million of euros (see here a previous post by BeBeez). Subscriptions to corporate bonds, credits issuance, and hybrid instruments are respectively 66%, 32%, and 2% of the whole amount of investments. The average maturity and size of bonds are of slightly above 6 years and up to 10 million of Euros. The other kind of transactions were worth 10.3 million of Euros, of which private debt firms subscribed 6.3 million of Euros with an average tenure of 5 and a half years and a 5.71% rate. It’s worth of notice that 25% of borrowers are private equity-backed companies and that the second highest number of targets (13)  is in the North-Eastern region of Trentino Alto Adige, where Finint Investment sgr manages Fondo Strategico Del Trentino Alto Adige, the regional firm .Last year the private debt firms raised less than the amount of 574 million of Euros  of 2016. The funds raised 292 million of Euros mostly (95%) from domestic investors like banks(27%), funds of funds (24%), and insurance companies (22%). Market participants however expected such figures as Fondo Italiano d’Investimento sgr subscribed to many private debt firms.

A few days ago Frosinone Calcio, an Italian Serie B Football Team, successfully issued a 5 years bond of 1.5 million of euros with a coupon of 8% (5% in cash and 3% in as equivalent vouchers for buying season and single tickets or merchandising items)(see here a previous post by BeBeez). The team conducted such placement on UK lending and equity crowdfunding platform Tifosy and overachieved by 500k euros its raising targets grace to the subscriptions of 371 investors. Frosinone Calcio will invest such proceeds in building Frosinone Village, the club official store, a fast food, a medical centre, a gym, a guests area, and the restructuring of the stadium fitting rooms. Maurizio Stirpe, the club chairman, said that he aims to start works for these constructions by end 2018 and added that the team could issue another minibond. Tifosy is the only crowdfunding platform for sport clubs that received authorization from UK Financial Conduct Authority and Italy’s Consob. Founders of the company are Fausto Zanetton, a former  media, tech and sport at Goldman Sachs and Morgan Stanley, and  Gianluca Vialli, a retired footballer that played for Juventus, Sampdoria and Chelsea).

Last week Kiko, an Italian cosmetic retailer, hired Bain & Co as financial advisor for negotiating a rescheduling of its financial liabilities (see here a previous post by BeBeez).. The company made this appointment after a breach of covenants for its gross debt worth 200 million of Euros. Kiko belongs to the Percassi family, that invests in the sectors of retail, real estate, and football as they own Atalanta, a Serie A team. Unused revolving credit facilities worth about 50 million of Euros are part of the total debt. In 2014 the company issued a bond of 130 million of Euros maturing in 2020 and with a 6.5% rate. Assicurazioni Generali, the listed Italian insurer, subscribed about 100 million of it, while another investor  paid for the remaining 30 million of Euros. Bnp Paribas, Unicredit and other banks provided facilities in the region of 20 million of Euros. Creditor banks and Generali respectively appointed Lazard and Mediobanca as advisors for such restructuring. Last year Kiko appointed as the new chief executive officer Cristina Scocchia, previously chairman and CEO of L’Oreal Italia. The company improved its performance in H2 2017 by generating 610 million of euros in revenues in 2017, but its ebitda of 30 million of Euros is still too low in relation to its debt. The company’s subsidiary in the USA filed for Chapter 11 bankruptcy protection. Frank Furlan, chief executive officer of Kiko Usa, said in a statement to Bankruptcy Court in Delaware that the subsidiary of Italy’s Kiko needs to shutter many of its stores after suffering “extremely high operating costs and continually depressed profits in recent years” due to challenges from online sales and declining mall traffic facing brick-and-mortar retailers.

Trevi Finanziaria Industriale, a listed Italian engineering group, is about to launch a capital increase that’s attracting the keen interest of private equity firms as the company needs is weighted by a 565.9 million euros net financial debt with a negative ebitda in H1 2017 (see here a previous post by BeBeez). Trevi  Finanziaria listed a 50 million euros bond at ExtraMot Pro market on July 2014, Trevi’s shareholders include the Trevisani Family (32.73%) and Cdp Equity  (16.85%). The company’s chief restructuring officer Sergio Iasi will carry on such fundraising. The negative trend of the Oil&Gas sector contributed to worsening the financials of the company which in 2H17 posted an ebitda of minus 18.8 million of Euros (62.3 million of Euros in 2H16) and net losses of 118.3 million of Euros. The board of directors also decided to postpone to the end of February the release the financials of 3Q17 in order to include eventual adjustments. Turnaround firm QuattroR reportedly hired Leonardo & Co-Houlihan Lokey to assess an eventual investment in Trevi’s capital increase. The company’s advisors are Law firm Lombardi Segni e Associati and m&a Boutique Vitale & Co. Rothschild, PWC and Law firm Molinari e Associati are assisting the creditor banks. Market rumours say that the Trevisani Family may sell its stake in Cantieri del Pardo, an Italian shipyard, to raise resources for subscribing the capital increase that could be worth between 200 and 300 million of Euros.