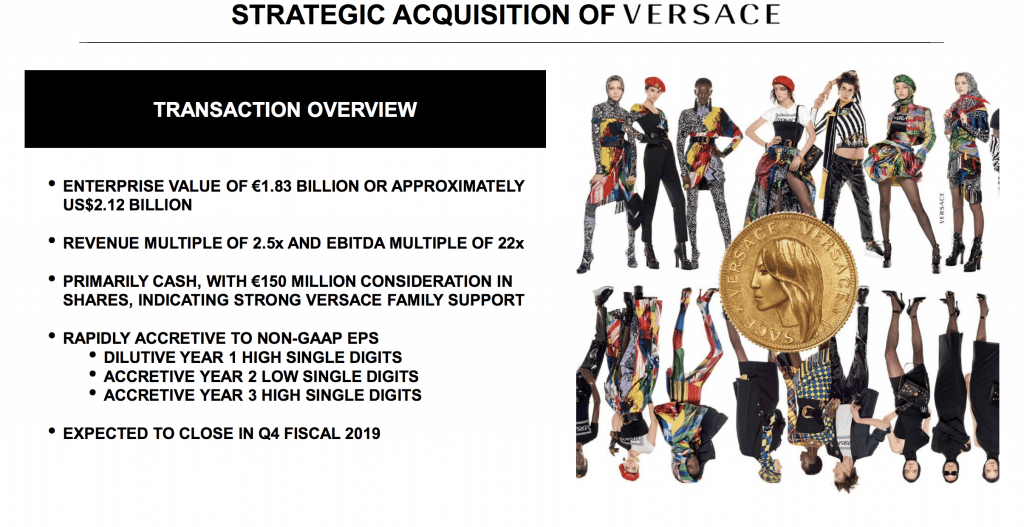 Michael Kors Holdings Limited announced yesterday the acquisition of the iconic Italian fashion brand Versace, adding details to a deal structure that was anticipated by press rumors onMonday (see here a previous post by BeBeez) and announcing that when the acquisition is finalized the NYSE-listed group will change its name into Capri Holding (see here the press release).

Versace has been valued 2.12 billion dollars (or 1.83 billion euros), which is more than the already high valuation of 2 billion dollars anticipated by press rumors. The valuation corresponds to 41x Versace’s 2017 ebitda which was 44.6 million euros, while in yesterday’s analysts presentation by Michael Kors  it is stated that Versace valuation corresponds to 22x ebitda, implying that the group’s ebitda for year 2018 will be around 83 million euros which is just a little lower than 2015’s 84.3 million euros ebitda (while year 2016’s ebitda was just a little higher than 2017’s, with 48.6 millions, see here an analysis by Leanus, after free registration and login).

Michael Kors’ s chairman and ceo, John D. Idol, yesterday said that “with the full resources of our group, we believe that Versace will grow to over US$2.0 billion in revenues”. The goal will be reached increasing Versace’s global retail footprint from approximately 200 to 300 stores, accelerating e-commerce and omni-channel development and expanding men’s and women’s accessories and footwear from 35% to 60% of revenues. 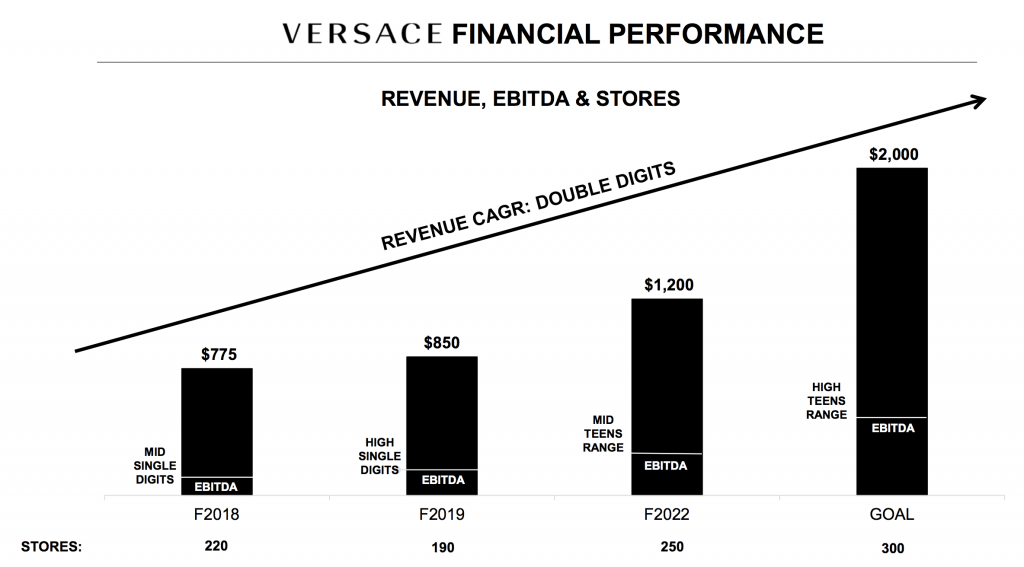 Today Gianni Versace spa is 80% controlled by Givi holding, which in turn is owned by stylist  Donatella Versace (20%), her brother Santo Versace and her daugther Allegra Versace Beck (50%), while US Blackstone private equity giant owns the remaining 20% stake since year 2014, when it subscribed a dedicated capitalincrease for 150 million euros and boughtother Versace share for 60 million euros from Givi Holding.

Michael Kors will finance the cash portion of the purchase price using a combination of cash on hand, drawings under the company’s existing revolving credit facility, and committed underwritten bank term loans from its advisors JPMorgan  and Barclays. The Versace family will also receive 150 million euros of the purchase price in shares of Capri Holdings Limited. The transaction is expected to close in the company’s fourth fiscal quarter, subject to specified closing conditions, including the receipt of required regulatory approvals.