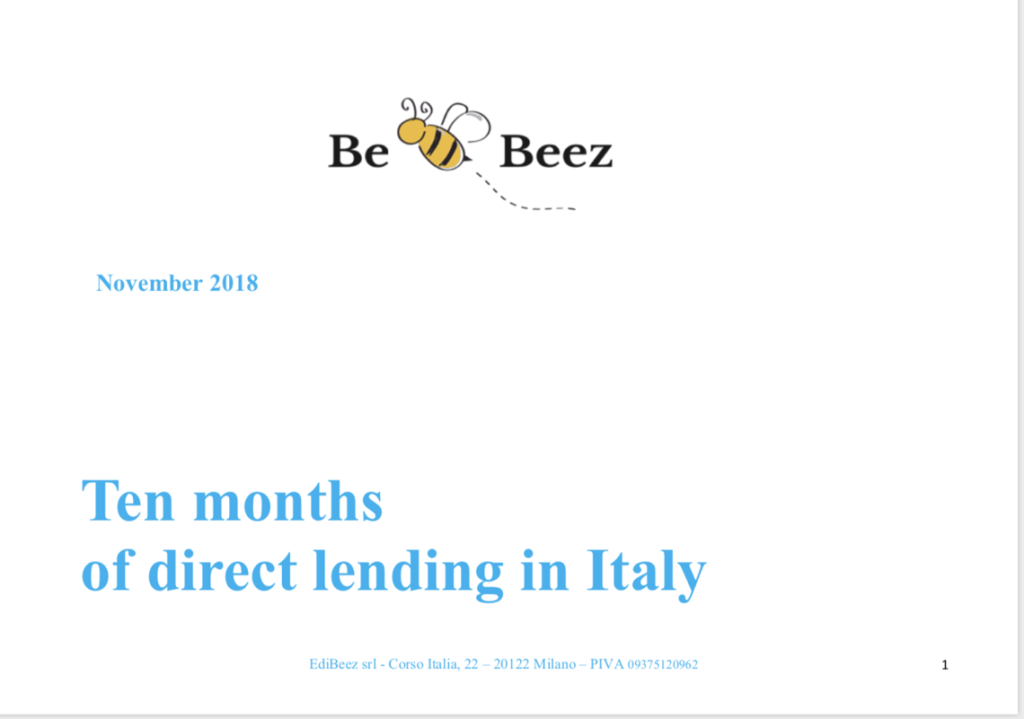 Since the beginning of the year, direct lending in Italy by non-bank specialized investors has reached almost 530 million euros. This number is reached if we consider direct lending in the broadest sense of the term and therefore also including medium-long-term loans and short-term loans, in the form of invoice financing on fintech platforms. The figure, which emerges from BeBeez Private Data (and is included in BeBeez’s Direct lending report, available to BeBeez‘s Premium readers), also shows that the number is higher than that of just under 550 million in the collection of unlisted Italian SMEs that in the same period January-October 2018 issued minibonds, ie bonds with dimensions up to to 50 million  (see BeBeez’s Private Debt Report here, available to BeBeez‘s Premium readers).

The leveraged loan and high yield bond markets seem set to burst and pave the road to a new financial crisis in the next two years, said Edward Altman, a Professor at NYU Stern School of Business that invented Z-Score, a well-known tool for corporate credit score appraisal (see here a previous post by BeBeez). Altman was speaking during a Law Firm Orrick event in Milan for the presentation of Italian Scoring Platform (ISC), a joint venture that servicer Officine CST signed with British fintech Wiserfunding. The seasoned Italian banker Daniele Cabiati is the chairman of ISC.

Aosta Court accepted the application for receivership from  Saint Vincent Casino (see here a previous post by BeBeez). Filippo Rolando, the ceo of the gambling house said that the company aims to implement a debt restructuring plan. In 2016, Casinç de la Vallée, the company owning Saint Vincent Casino, had losses of 46.6 million of euros, revenues of 63.3 million, an ebitda of minus 6.5 million, and net financial debt of 11.3 million. CSV belongs to the Valle d’Aosta Region. Aosta criminal court dismissed fraud charges for Casino executives. However Court prosecutor Eugenia Menichetti said that the company’s books were false since 2012.

Equita Group’s ceo Andrea Vismara said that the company is studying the launch of its own investment vehicle and of a second private debt fund (see here a previous post by BeBeez). Equita Private Debt Fund  that Lemanik am is managing, invested 68% of its resources, and could have subscribed part of the 133 million of euros worth bond that Italcer issued for acquiring Rondine. Paolo Pendenza, the manager of the fund, also said in previous interviews that the firm may raise money for a further fund.

Minor Italian football team Pescara Calcio has less than one week for completing the fundraising for its 2 million of euros worth bond that is campaigning on UK fintech platform Tifosy (see here aprevious post by BeBeez). The team received commitments for 1.44 million. The bond would pay an annual coupon of 8%, 5% in cash and 3% in credit for acquiring the club’s season tickets, tickets or merchandising items. Pescara Calcio may pay a 25% bonus if it achieves the Serie A promotion during the bond’s tenure. The club will invest these proceeds for the renewal of Delfino Pescara Training Center. The Italian team has revenues of 40.5 million, an ebitda of 21 million, net debts of 4.5 million, and net profits in the region of 4.6 million, while last year it launched a capital increase of 1.6 million and paid back the last tranche of its 5 million bond issued in 2014 with a 5.5% coupon.

Bper Banca completed the securitisation of Aqui a portfolio of NPLs with a gross value of 1.9 billion of euros (see here a previous post by BeBeez). Aqui’s  59.5% credits are secured while 40.5% are unsecured. These liabilities are worth 618.4 million, of which the senior tranche of 544.7 million (28.7% of the gross value) received an investment grade rating of Baa3 from Moody’s and BBB- from Scope Ratings. These tranches pay a 50 basis points spread over the 6 months euribor and may have the Gacs guarantee. The unsecured portfolio has also a mezzanine tranche of 62.9 million and a junior tranche of 10.8 million. Alessandro Vandelli, the ceo of BPER, said that the bank could soon sell another portfolio of NPLs worth 1 billion. Prelios Credit Servicing is acting as master and special servicer for this securitisation.