Home Companies Binding offers for Roberto Cavalli fashion maison due in a few hours. The deal might link with the Phillip Plein’s one
Private EquityJanuary 31, 2019Posted By: Valentina Magri
Print Email

Binding offers for Roberto Cavalli fashion maison due in a few hours. The deal might link with the Phillip Plein’s one 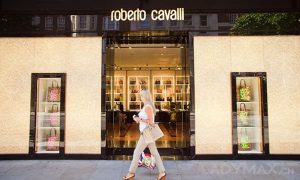 The deadline is coming in the next hours to present the binding offers for the Italian fashion maison Roberto Cavalli, owned with a 90% stake by Clessidra sgr since 2015 togetjher with minority co-investors L-GAM fund and  Chinese Chow Tai Fook Entreprises Ltd, a subsidiary based in Hong Kong controlled from the Cheng family (see here a previous post by BeBeez).

The deal was then closed on the basis of an enterprise value of  380-390 million euros, a multiple of around 16x the ebitda of 2014, which had been around  23 millions, compared to revenues of 210 millions.

Last October 2018 Clessidra gave a mandate to Rothschild to evaluate possible candidates to buy a minority stake in Cavalli’s capital to support the relaunch of the brand (see here a previous post by BeBeez), but  Cavalli’s shareholders  would also be open to assess any offers for brand control.

Founded in Florence in the 70’s, Roberto Cavalli ended FY 2017 with a slight decline in revenues to 152.4 million euros (from  155.2 millions in 2016), a negative ebitda of 7.1 millions (but a marked improvement over the – 26.2 millions in 2016), a net loss down to 33.6 millions (from  55.2 millions) and a positive net financial position of around 1.2 millions. The brand has recently been the protagonist of a relaunch phase, thanks to the work of the new creative director Paul Surridge and the strategy of ceo Giangiacomo Ferraris. However, in September 2018 Clessidra had to underwrite a  5 million euros capital increase to cover the 2017 net losses (see here a previous post by BeBeez). and the group should close 2018 again with a net loss, although for an amount lower than the year before and with a break-even marginality.

On the advisor’s table in the past few months, there have been non binding offers by about 10 subjects. Among these are Asian funds and the Otb by Renzo Rosso, the entrepreneurs of the Diesel jeans brand, licensee of the Just Cavalli brand since 2011. Also Philipp Plein, the fashion maison founded by the homonymous German designer (see here MF Fashion), which in turn is looking itself for a financial partner to back its further growth.

Philipp Plein, who began his career in 1999 as an interior designer, is now the owner of the homonymous fashion group based in Lugano, present in 64 countries with over 700 employees. The group owns three brands: Philipp Plein, Plein Sport and Billionaire Couture of Flavio Briatore, of which it has acquired 51%. The group’s reference markets, which closed 2018 with around 300 million turnover and aim for 13-15% growth in 2019, are the Russian one (10-15% of the total), Italy (10%) , the rest of Europe, Asia and the Middle East.

The Philipp Plein dossier would now be examining funds of the caliber of Advent, Permira and Carlyle and by the end of March the phase of collecting the offers should end, the value could obviously change if in the meantime Philipp Plein won the race for Cavalli. In any case, even today the designer believes that his fashion house is worth well over 700 million euros. On Instagram, in response to an article by Sole 24 Ore at the end of December, the designer had written that for 700 million of evaluation he would not even sit at the table with the buyers. 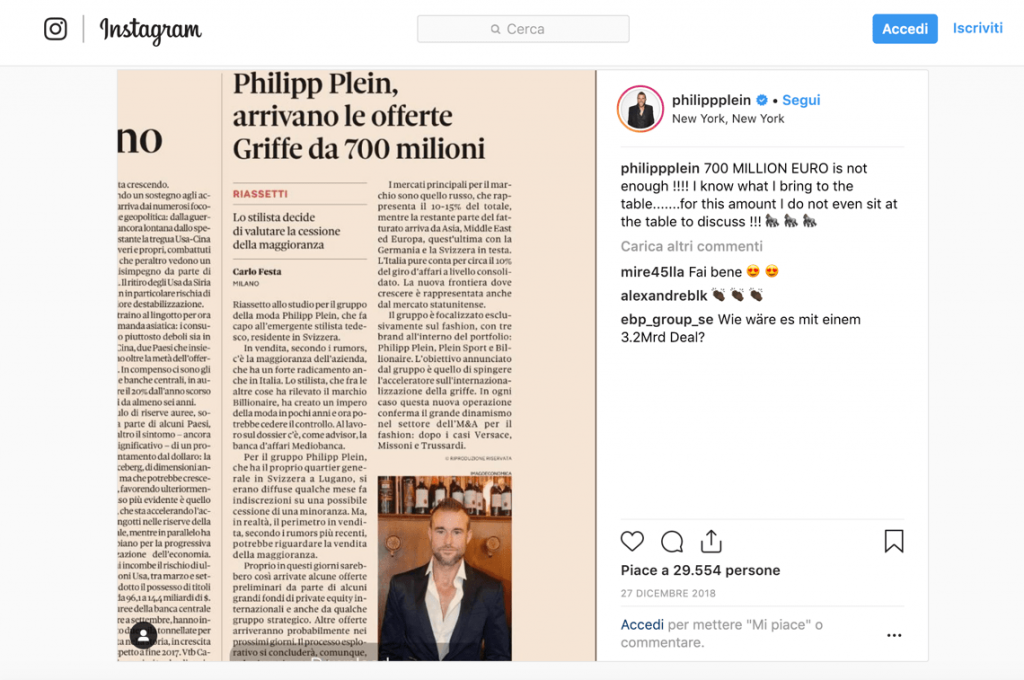