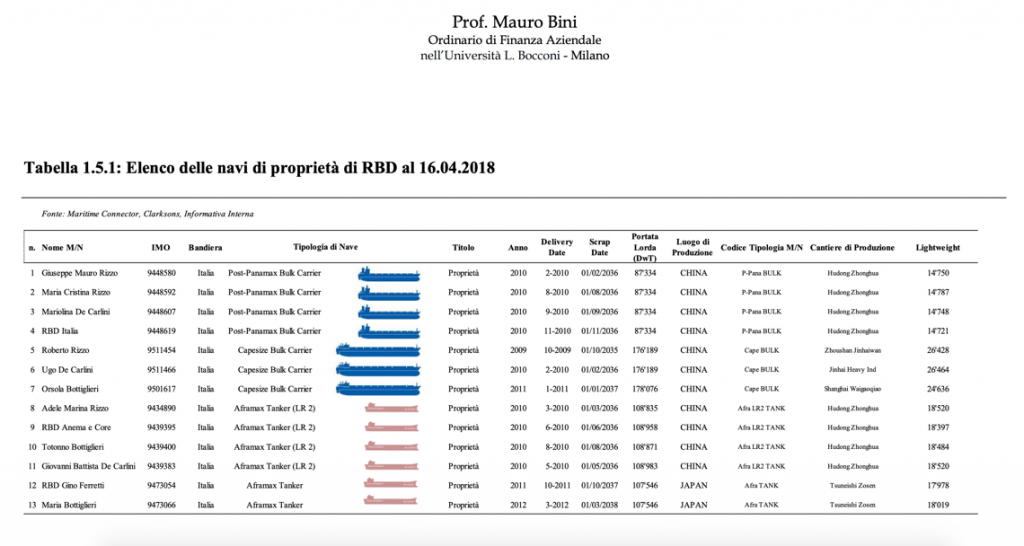 Surprisingly, there would be a 270 million euro purchase offer for all the assets of defaulted Naples-based shipping company RBD Armatori by a foreign investment fund,  Transport Europa writes, stating that the offer was filed to the Torre Annunciata Court by B&G in the past few days.

It is not clear at the moment whether B&G is a vehicle controlled by the French hedge fund Boussard & Gavaudan or to an entity controlled by the private equity fund Reuben Brothers. The latter has its own headquarters in Italy and specializes in investments in the shipping sector through the companies Rb Shipping and Rb British Marine (a few years ago it had the opportunity to do business with another Italian shipping company, Scerni di Navigazione). Also according to Transport Europa, in this project to purchase and relaunch RBD Armatori, the current RBD’s ceo Giuseppe Mauro Rizzo may also be involved in some way.

The proposal arrives on the eve of the deadline stated for the auction launched by the Court for the sale of the main assets of the RBD group. Last December the Torre Annunziata Court had actually set the date of February 15th as the deadline for submitting offers for the purchase of both the shipping branch of RDB Armatori (the 13 dry and liquid bulk carriers of the fleet, plus employees and rental contracts ) at a base price of 190 million dollars (see here the sales notice and here the valuation report) and 100% of the capital of HLP Hotel La Palma spa, owner of the La Palma di Capri Hotel at a base price 35 million euros (see the notice of sale here). The date of sale is instead set for February 22nd.

The major lender of RBD Armatori is KKR‘s sponsored turnaround fund Pillarstone Italy, which owns 560 million euros of loans bought about one year and half ago by Banco di Napoli (Intesa Sanpaolo), MPS and MPS Capital Services (see here a previous post by BeBeez). A further 260 million loans are in the portfolio of  Goldman Sachs and Deutsche Bank, which in turn had bought loans respectively, for a total of 208 million from Unicredit and Ge Capital, and for 51 million from Banco Popolare.

Last July a first auction was held for the 13 ships of the RBD fleet for a base price of 200 million dollars, but it had been deserted and only a few days before the committee of creditors had not accepted an offer by Pillarstone Italy to buy 7 of the 13 ships at a price of 185 million dollars (see here a previous post by BeBeez).