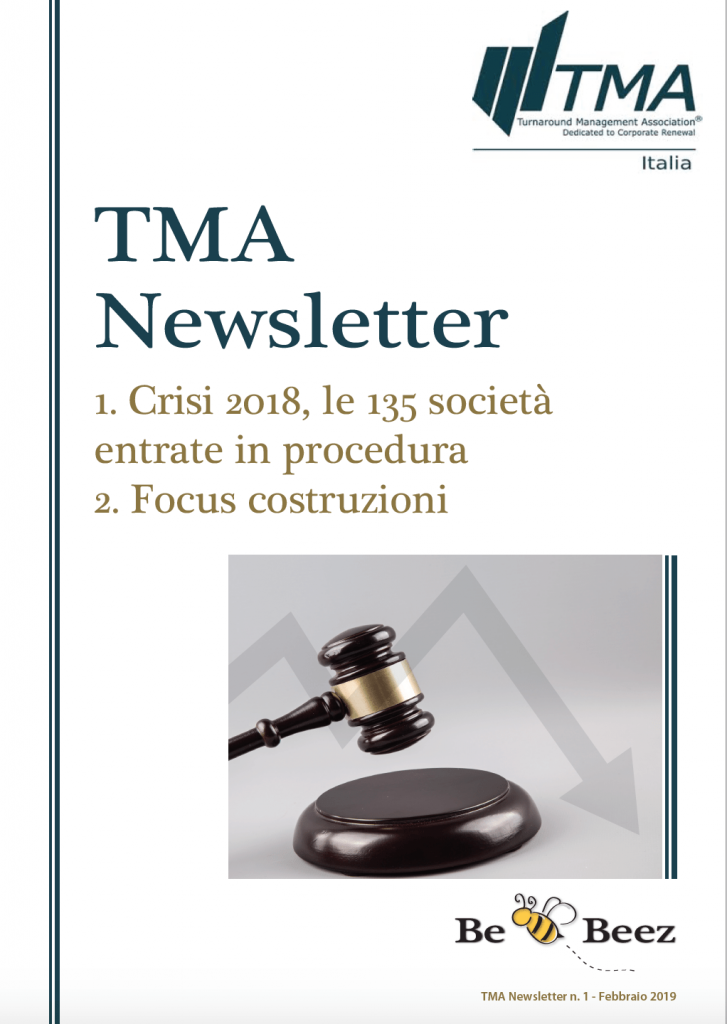 BeBeez will support TMA Italia, the Italian association of turnaround managers, as media partner for the production of a monthly newsletter about corporate restructuring issues (see here a previous post by BeBeez).

Italian companies still depend on banking channel for financing their investments (see here a previous post by BeBeez). However, the current regulatory frame makes difficult for traditional lenders to support investments, said Ignazio Visco the Governor of Banca d’Italia, that was introducing a report of Equita and Stefano Gatti, Bocconi Professor of Infrastructure Finance, and Stefano Caselli, chancellor for internationalisation at Bocconi University. Bank loans make 60% of financing for Italian companies, the highest value for Euro Area. Visco pointed out that alternative financing is still too expensive for SMEs. Equita’s ceo Andrea Vismara, said that a lighter regulation for SMEs alternative financing is necessary. Marco Clerici is the co-head of investiment banking at Equita.

Torre Annunziata Court suspended the auction for the sale of the assets of troubled Italian shipping company RBD Armatori (see here a previous post by BeBeez). This may mean that the Court could be willing to accept the 270 million of euros bid that financial Reuben Brothers tabled. Pillarstone Italy has credits of 560 million towards RBD, while Goldman Sachs and Deutsche Bank lent 260 million to the company.

Pepper, the Australian distressed credits servicer that Mark Cuhlane founded and private equity KKR delisted from Sidney at the end of 2017, rebranded as PCMI (see here a previous post by BeBeez). Alfredo Goldaniga, ceo of PCMI Italy, said that the company may grow also through acquisitions and the enlargement of its strategic precinct to complementary business areas. In December 2018, PCMI acquired 60% of Steram, a startup with a focus on property and facility management and real estate that Stefano Ramella founded. Goldaniga said that the company will rebrand as PCMI Real Estate. Goldaniga said that the company is negotiationg the acquisition of a law firm with 14 professionals with an expertise on credit recovery that will make PCMI Legal Services. Furthermore, PCMI aims to acquire from a bank a platform for managing distressed and Italian credits consumer credit companies, said Goldaniga without elaborating further.

US corporate credit investor Muzinich announced the closing of its new private debt pan-European fund  at 706.5 million of euros, over its 700 million euros target and is studing the launch of ELTIF (European Long Term Investment Funds) products targeting retail investors (see here a previous post by BeBeez). The firm’s founder George Muzinich, country manager Domenico Del Borrello, global head of capital markets strategy Fabrizio Pagani, and managing director Filomena Cocco made this announcement. This new fund of Muzinich will invest in the debt of SMEs based in Italy, UK, France, Germany, Austria, Switzerland, Benelux, Iberian and Scandinavian areas, and Ireland. Targets may have an ebitda of 3 – 20 million. The fund will issue senior, unitranche, mezzanine, and junior loans, while some of these could have the equity option for financing M&A and internationalisation plans.

Berti Group, an Italian food company, listed a minibond on Milan ExtraMot Pro (see here a previous post by BeBeez). The short-term liability is worth up to 0.5 million of euros, pays a 4.2% coupon and is due to mature on December 2019.Investors subscribed 0.3 million. The company will issue up to one million of euros of minibonds within 1H19, all issuances will have an up to 12 months tenure. Frigiolini & Partners Merchant is Berti’s advisor. Aldo and Ottavio Berti founded the company of which Denis Berti is the coo. Berti has sales of 89.9 million, an ebitda of 1.5 million and net financial debt of 11.3 million.

Portobello, an Aim-listed media sales company, borrowed 2 million of euros in direct lending from private debt fund HI CrescItalia Pmi Fund, which belongs to Hedge Invest (see here a previous post by BeBeez). Banca Finint acted as arranger for this senior unsecured financing with a five years tenure, maturity on 31 March 2024, and a quarterly reimbursement plan. Portobello may raise a further one million and will invest the proceeds of this transaction in it organic growth. Simone Prete, Stefano Caporicci, Patrizia Amicucci, Pietro Peligra (ceo), and Luca Nardi control the company that has sales of 10 million and an ebitda of 0.55 million.