Investments by private equity and venture capital funds in Italy reaches an all-time high in 2018 at 9.78 bn euros, AIFI says 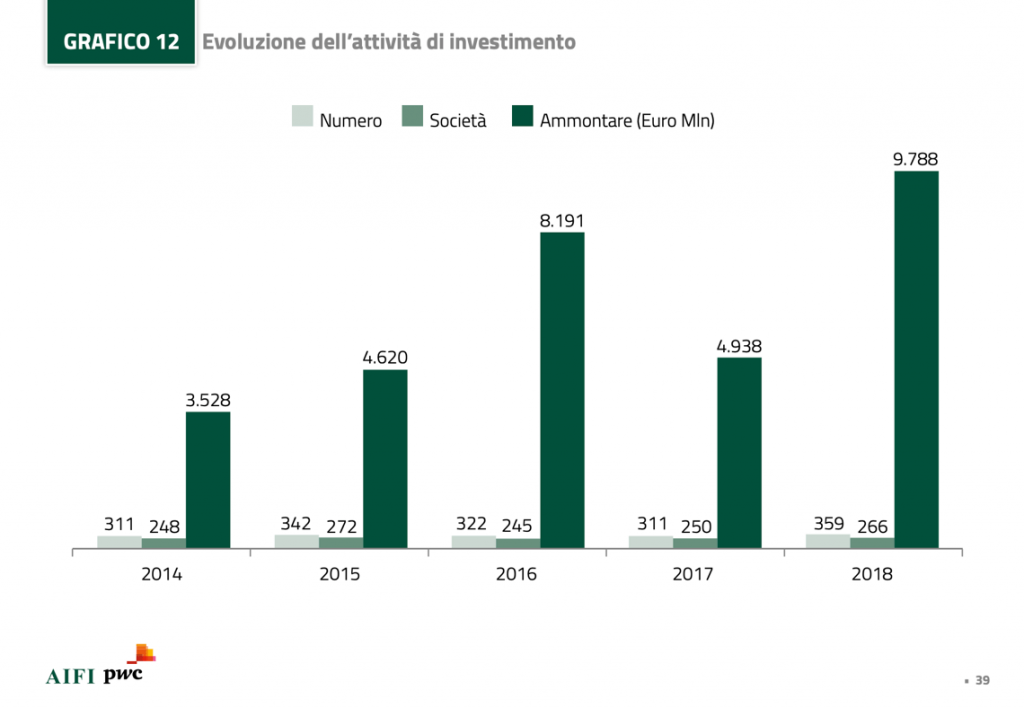 Figures were revealed by the annual survey made by AIFI, the Italian Association of private equity, venture capital and private debt, in collaboration with PwC-Deals, presented on March 11 at the annual conference of AIFI by chairman Innocenzo Cipolletta and the general manager Anna Gervasoni (see the press release here). The annual private debt data, prepared by AIFI in collaboration with Deloitte, were also presented at the conference: private debt operators invested just over one billion euros, a net increase from 617 in 2017, and raised 297 million, down from 322 million in 2017.

Coming back to private equity and venture investments, the strong increase in volumes is mainly due to the return of the so-called large and mega-deals, or transactions for which the funds have committed respectively between 150 and 300 million euros and over 300 million euros. In 2018 there were 13 of those deals for a total equity value of 5.925 billion euros. 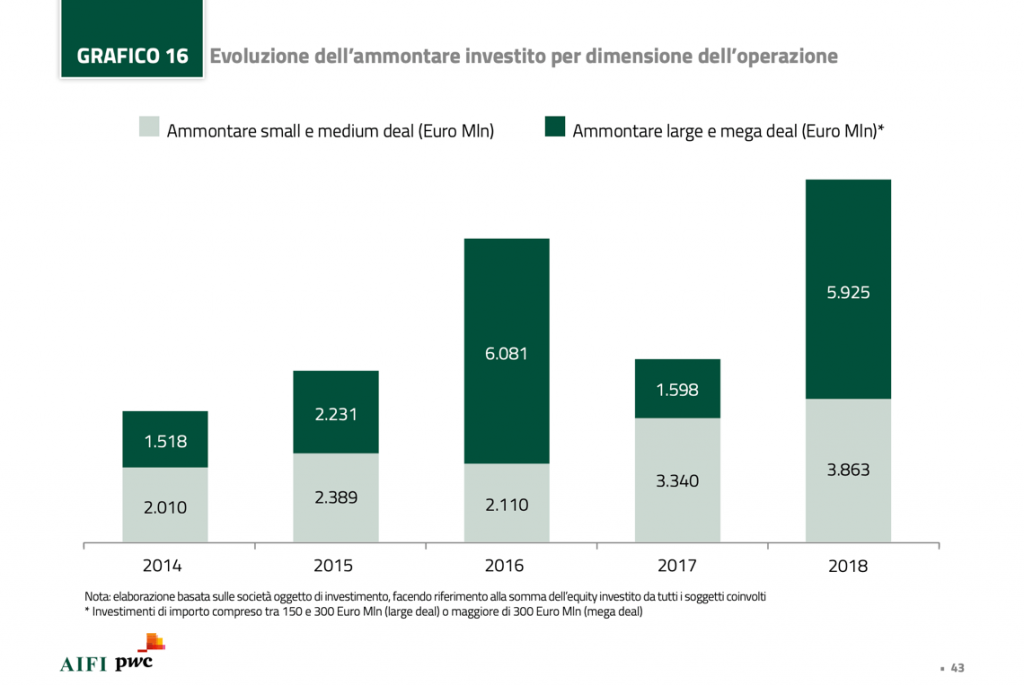 The phenomenon had already been detected in the first-half figures released by AIFI last September (see here a previous post by BeBeez), in addition to the latest BeBeez report on private equity released last August (available here for BeBeez News Premium 12 months readers, see here how to subscribe for only 20 euros a month).

Of this 9,78 billion euros total, international firms have invested 66% in terms of amount, ie 6.4 billion euros. The largest direct invesrtment was certainly the one on the Milan-listed pharma group Recordati made by the CVC Capital Partners joined by PSP, Stepstone and Alpinvest (see here a previous post by BeBeez). In 2018, in fact, the consortium bought from the Recordati family the FIMEI holding company which controls 51.78% of the group for 3 billion euros, while the further purchase of shares on the market after a compulsory tender offer at the Milan Stock Exchange was minimal, given that the funds’ aim was not the delisting of the group, so the funds at the end of last February rose to only 51.82% of Recordati after the tender launched at € 27.55 per share.

On the subject of the deal, Giampiero Mazza, CVC’s partner in charge of the Italian activities, on the occasion of his speech at the AIFI conference said: “The Recordati deal  is important because it is the first time such a large family group entrusts his legacy to a private equity fund. After the death of Giovanni Recordati, a generational shift was needed in the name of the continuity of the management, the manufacturing footprint and the growth of the company, without an important contribution in terms of leverage for the company. Based on these requests, we have structured the debt at the holding level, so as to leave the operating company debt free”. Mr. Mazza also said that Italian companies are seen very well abroad,”almost as heroic, because they have become leaders in their market or abroad despite the fact that Italian institutions have never been of help, but there is also an Italy discount when you discuss Itaaly’s deals at private equity investment committees, due to the lack of legal certainty, which is at its maximum with this government “. The Ministry of Economic Development Dario Galli, who ended the conference with his speech, reiterated his extreme attention to everything that is economic and wants to make life easier for businesses, while recalling that “the Government itself is a startup, so a certain mortality rate is normal ”.

Coming back to private equity investments in Italy in 2018, the largest deal was the one on auto-parts maker Magneti Marelli from Italy’s car making group FCA. That deal actually involved a private equity fund, even if indirectly, because US private equity giant KKR bought the company through its Japanese portfolio company Calsonic Kansei Corp on the basis of a valuation of 6.2 billion euros to the Japanese  controlled by KKR (see here a previous post by BeBeez). 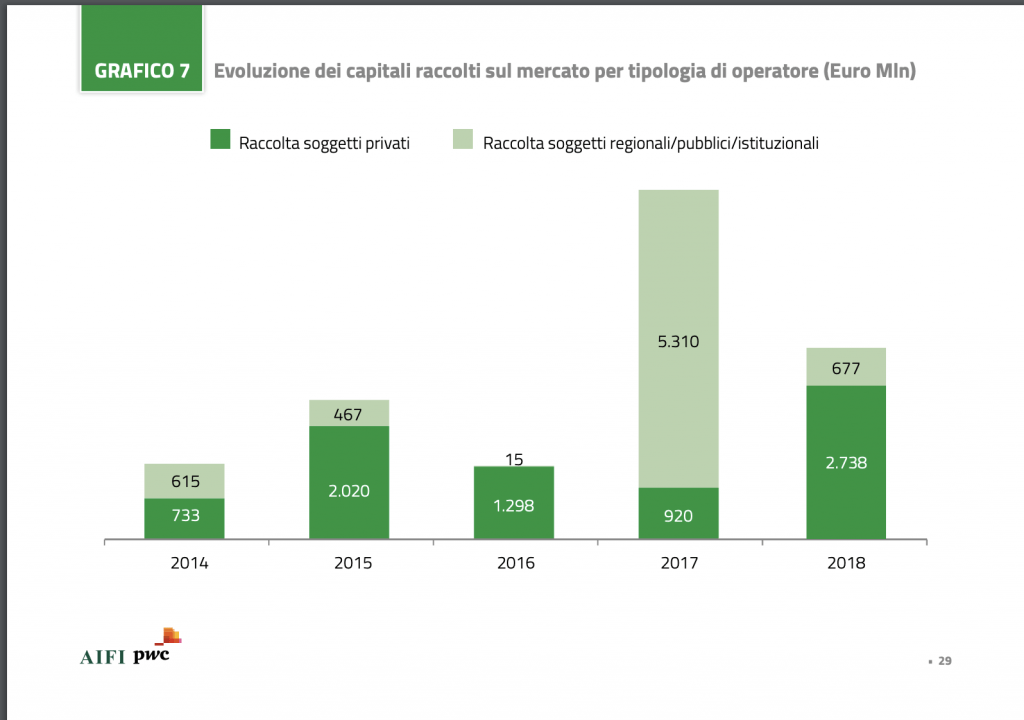 On the fundraising figures were downfor private equity and venture capital funds to around 3.4 billion euros, of which 2.7 billions were raised by independent firms, almost three times the figure for 2017 (which was 920 million euros). In particular, more capital was coming from pension funds and social security funds (24% against 10.6% of funding in 2017) and insurance companies (12.5% ​​from 1.8%). By contrast, net inflows from family offices fell sharply (15.4% from 27%).

“This is a sign that we have been waiting for a long time and that can be a first step towards a European alignment with international investors,” said AIFI chairman Innocenzo Cipolletta, adding that “pension funds are the main investor in all countries in  private capital funds because they give greater returns for those who can invest in relatively longer times. In this way the social security system also invests in itself as it promotes the country’s economic activity and work, which is the only source of social security funding . 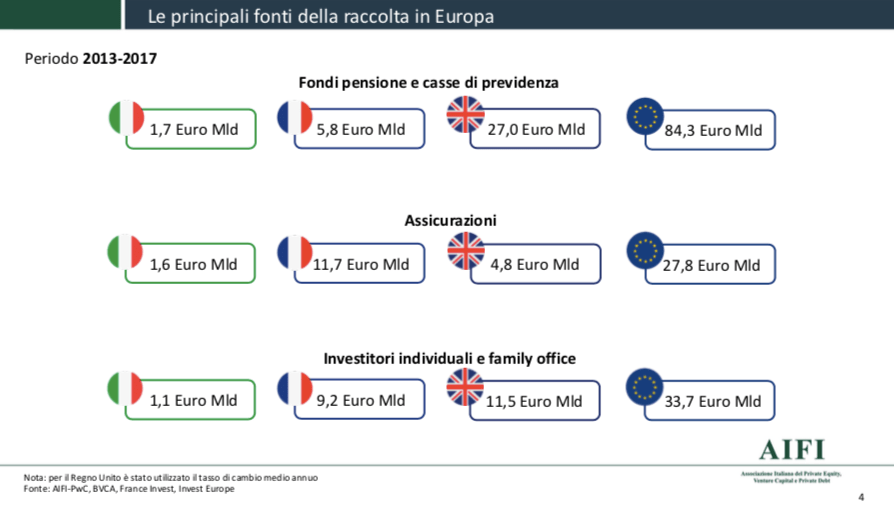 despite the relative growth of pension funds and insurance, their contribution to funding in Italy is still far from France, the United Kingdom and the rest of Europe. In particular, in the 2013-2017 period it was calculated that Italian pension funds only invested in Italian private equity and venture capital funds 1.7 billion euros compared to 5.8, billions collected by French funds and 27 billion euros by the UK ones.

On the issue of fundraising, however, it is worth considering that private capital funds (including debt funds, even if their contribution to the total is limited) with a specific focus on Italy between 2018 and the first two months of 2019, have raised 7.5 billion euros of commitments by investors (see here the BeBeez Insight View on fundraising, (available here for BeBeez News Premium 12 months readers, see here how to subscribe for only 20 euros a month). Of that total,  6.1 billion euros  relates to the final closing of fundraising, while € 1.3 billion relates to funds that are still fundraising and which have therefore only announced partial closings. This means that  the dry powder ready to pour over unlisted Italian companies would be enriched by at least another 3.4 billion euros, bringing the total of resources available to almost 11 billion euros. 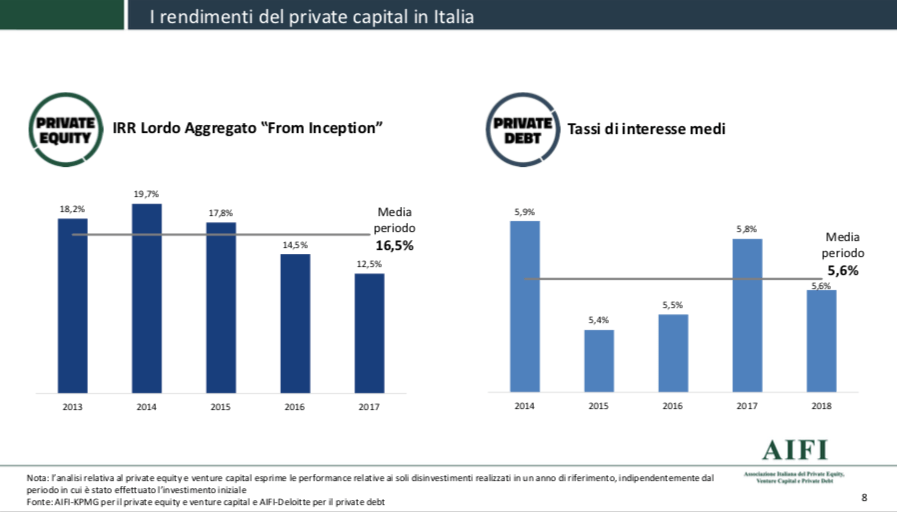 All announced deals were mapped in the BeBeez Report 2018 on Private Debt and Direct Lending (available here for BeBeez News Premium 12 months readers, see here how to subscribe for only 20 euros a month).