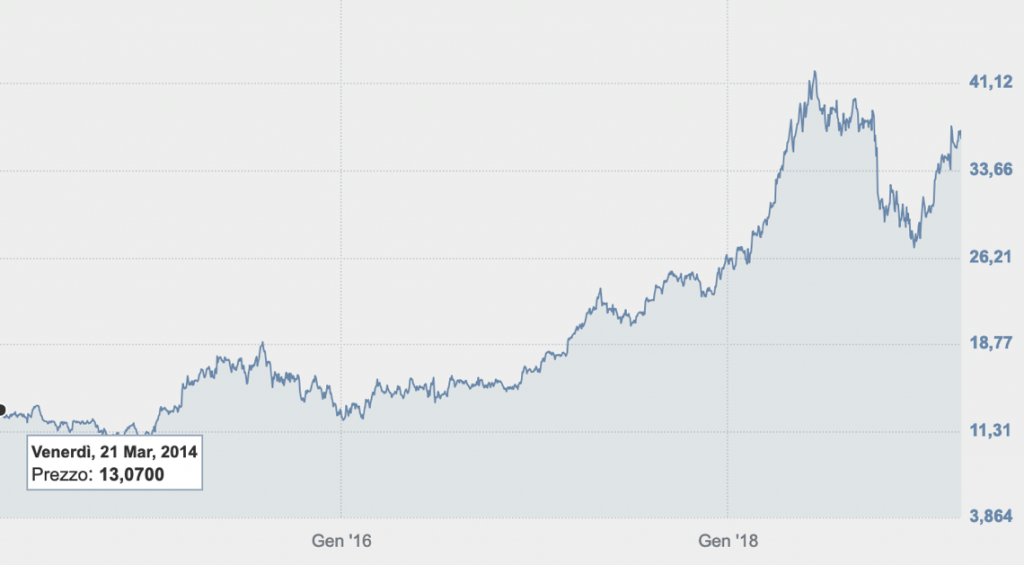 The French private equity firm Eurazeo announced its final exit from Italy’s fashion luxury brand Moncler listed at the Italian Stock Exchange. More in detail, the firm sold its remaining 12,199,626 shares, equal to 4.8% of the capital, at a price of 36.5 euros per share, collecting a total of approximately 445 million euros. The sale took place through an accelerated bookbuilding procedure to institutional investors (see the press release here).

The consequence was that the Moncler shares yesterday closed at 36.40 euros, down 1.75%, scoring the worst performance on the FTSE MIB index. “The news is not a surprise, but we do not exclude a certain weakness of the share price in the short term “, commented Mediobanca analysts.

Moncler has been listed on Piazza Affari since December 2013 (see here a previous post by BeBeez) and Eurazeo had invested in June 2011 with a 45% stake based on an overall equity value of 930 million euros (418 million euros therefore the outlay of Eurazeo), corresponding to an enterprise value of 1.2 billion euros or 12x year 2010 ebitda which was 102 euros (see the presentation to analysts here). Eurazeo was therefore supported in the Moncler capital by the founder and managing director Remo Ruffini (32%), private equity firm Carlyle (18%) and Italy’s private equity fund Progressio Investimenti (5%). Carlyle in turn had initially invested in Moncler in 2008, taking over part of the stakes owned by Mittel and Progressio (see here the press release of that time).

During the ipo placement, the offer had been hedged 30 times and the price had been set at 10.2 euros per share, the maximum of the expected range, thus bringing the enterprise to value to 2.6 billion euros, or 15 times ebitda 2012 (170 million euros). On that occasion 30.7% of the capital was sold on the market for 783 million euros (see here the press release at the time), with Eurazeo having fallen to 23.33%, Carlyle to 7.13% and 1.26% progress.

Eurazeo then gradually started selling its remaining stake in Moncler. The first tranche of 7.8% of the capital was sold in May 2015 (see the press release here), while the last sale before the final exit from capital dates back to October 2017 and involved a share of 3, 34% of the brand at 24.48 euros per share, equal to 208 million euros, for net proceeds of 188 million (see the press release here).

In August 2013 Tamburi Investment Partners with a club deal of private investors had indirectly entered the capital of Moncler, with the acquisition of 14% of the holding company Ruffini Partecipazioni srl  (see here a previous post by BeBeez) In his letter to the shareholders of last March 14, Gianni Tamburi points out that in early 2018 TIP reduced its indirect stake in Moncler by about a third, given the non-encouraging market outlook in early 2018, but adds that “in any case the large package still in the TIP portfolio at the end of 2018 allows us to continue to benefit from the success of this fantastic company and the ability of Remo Ruffini and his team to expand – albeit politely and in a well-considered way – the range of products, to continue to open stores (always spectacular) in areas that deserve a direct presence and, at the same time, to be able to maintain a monstrously high profitability: over 500 million ebitda with, a gross operating margin of 35% on revenues, in 2018 “.

Founded in 1952 in France, in Monestier-de-Clermont, Moncler in 2003 was taken over by Remo Ruffini, who has since implemented the strategy of the “global down jacket”, focusing on wearability and materials to make more and more explicit the universal soul of Moncler and its multiple uses in every moment of everyday life.Today the offer of Moncler brand products includes the haute couture collections, Gamme Rouge and Gamme Bleu, the Grenoble collection, with sporty and technical garments with a high content stylistic, the Special Projects, with an innovative design and the result of ad hoc collaborations with avant-garde designers, and the Main collection, the best known and most widespread. Today, Moncler is worth four times the price of 10.2 euros to which the ipo had taken place for the landing at Piazza Affari and has a 9 billion euros market cap.