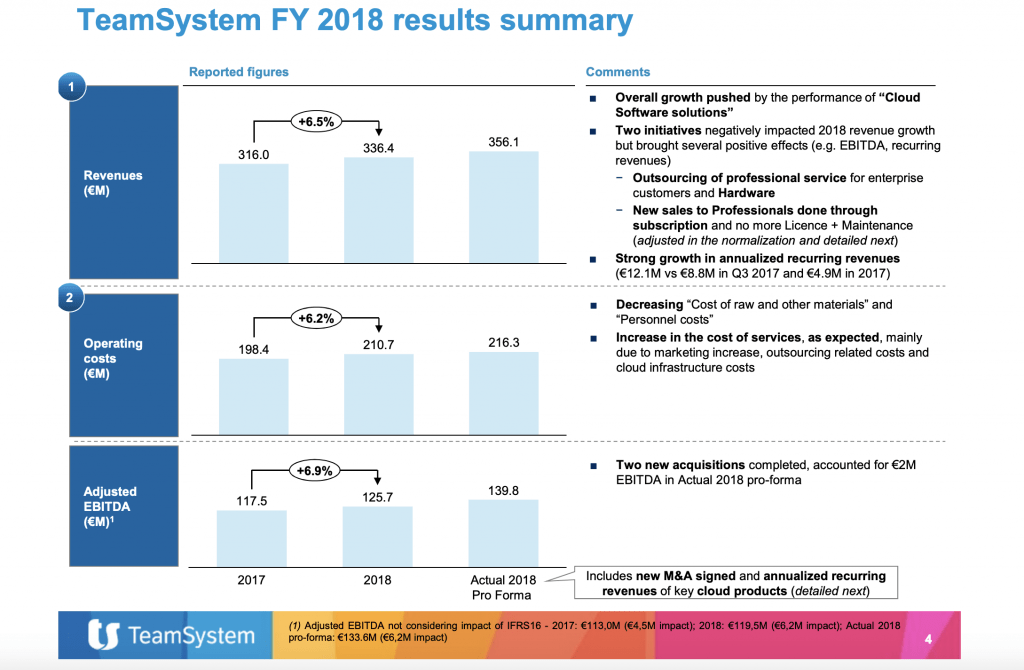 Teamsystem’s FY 2018 pro-forma results show that the Italian ICT group reached 356.1 million euros in revenues and 139.8 million euros in ebitda  with a net financial debt of 751.1 millions (including the impact of the new accounting standard IFRS 16) , for a leverage of 5.37x ebitda (see here the presentation of the 2018 results to the analysts).

From a civil law point of view (ie without taking into account the two acquisitions conducted by Teanmsystem during the year), 2018 ended with revenues for 336.4 million euros (from 316 millions in 2017) and an adjusted ebitda for 125. 7 millions (from 117.5 millions).

As for the debt, although it is high, it was just refinanced in March 2018 for 750 million euros, with the issue of two senior secured bonds, one of 550 million euros maturing April 15, 2023 and the other of 200 million at April 15 2025, both indexed to the 3-month Euribor rate plus 400 basis points, with a minimum of 0% and listed on the Luxembourg Stock Exchange (see here a previous post by BeBeez).

In any case, these are numbers that, considering the multiples running in the tech sector today, between 10 and 13x the ebitda, lead to an enterprise value by the group of providers of IT management solutions for companies of 1.4-1.8 billion euros. A figure on which the controlling shareholder Hellman & Friedman is said to be now thinking as a possibile exit from the investment it made in December 2015, when H&F had bought control of the group from Hg Capital, with the latter reivesting for a minority(see here a previous post by BeBeez).

Back then Bain Capital had definitively exited Teamsystem’s capital. Bian Capital had actually in turn reinvested for a minority when it had sold control of Teamsystem to Hg Capital in the Summer of 2010. The deal at the end of 2015 was made on the basis of an enterprise value of 1.2 billion euros, or 16x the expected ebitda for 2015. In 2010, on the other hand, Hg capital had valued the group 565 million euros, or  over 12x the 2009 ebitda.