Home Companies Carige, Blackrock in talks with potential coinvestors for the capital increase of the distressed bank. Binding offer by May 17th
Crisi & RilanciApril 17, 2019Posted By: bebeez
Print Email

Carige, Blackrock in talks with potential coinvestors for the capital increase of the distressed bank. Binding offer by May 17th 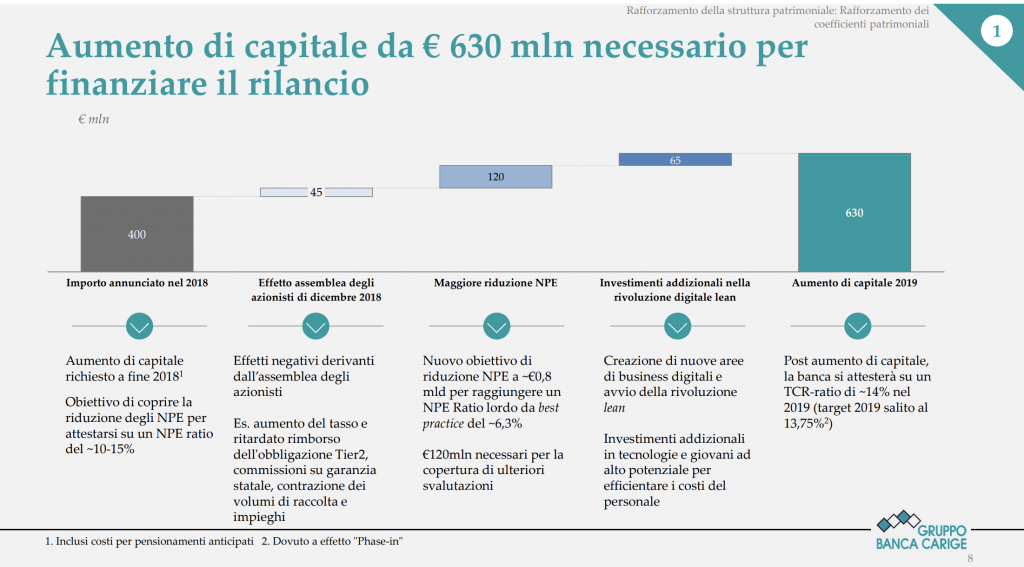 BlackRock is working to expand the consortium that is negotiating the purchase of Carige to other coinvestors funds and could formalize the binding offer by the new deadline of May 17th, MF Milano Finanza reported.

One of the special situation funds managed by the US asset management giant, assisted by Mediobanca, would be dealing in particular with private equity funds and credit funds to underwrite part of the 630 million capital increase launched by the distressed bank commissioners Pietro Modiano, Fabio Innocenzi and Raffaele Lener, in turn assisted by the industrial advisor Boston Consulting Group in the development of the strategic plan 2019-2023 for the reorganization and relaunch of the bank. The latter also includes the sale of € 2.1 billion of impaired loans by the end of the year, to cut the NPE ratio from 22% at the end of 2018 to around 6.3%, against the 10-15% originally forecast (see here a previous post by BeBeez).

As we know, of the total of 2.1 billion, a portfolio of 1.9 billion euro, of which about half bad loans and the other half UTPs, will be sold by the end of the second quarter: in fact, for the portfolio in question already exists a binding offer put forward to the bank on 22 February by SGA, while Credito Fondiario had formulated a non-binding one. In any case, the offer will remain open for a few months, so as to leave new investors in the bank’s capital the possibility of also acquiring the portfolio of non-performing loans, while the bank is having the certainty of cutting the package of 1.9 billion. According to BeBeez, on this front Blackrock would not be interested in acquiring the Npl with its funds, while the corporate Utp could instead be the object of interest, with a view to restructuring and relaunching the debtor companies.

The other aspect to be defined concerns the role of the Malacalza family, which, according to MF Milano Finanza, Blackrock intends to involve in the bank’s relaunch operation. The family seems oriented to participate in the capital increase, subscribing a tranche between 60 and 90 million and thus diluting the participation from the current 27% to a share of around 10%. It is also inevitable that the ongoing discussion with BlackRock concerns not only the capaital increase, but also the future governance of Carige. The intervention of the Voluntary Scheme of the Deposit Protection Fund (Fitd) would no longer be a cause for concern, which appears to be oriented towards converting the subordinated bond of 318 million subscribed at the end of last November into equity.

The move, which will still have to go through the assembly, will be discussed in the board of directors that Fitd scheduled for  today. Having said this, the hypothesis of a State intervention, ie a precautionary recapitalization on the Montepaschi model, remains on the table, as long as the European authorities recognize Carige’s national systemic importance. An assumption that is far from obvious given that the Genoa-based institute has assets of just 23 billion against the 153 billion that Montepaschi had at the end of 2016.