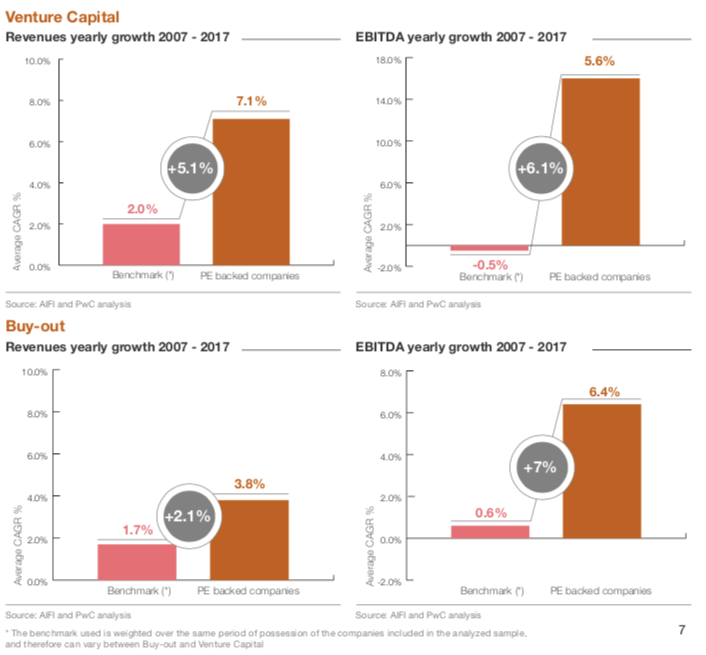 The Italian companies that received support from private equity and venture capital funds grow more than those who haven’t sold a stake to a financial investor, says “The economic impact of Private Equity and Venture Capital in Italy“, a report that PwC and Aifi, the Italian association of financial investors, carried out (see here a previous post by BeBeez).
The report analized 500 disposals that the financial firms concluded between 2000 and 2017. In 2017, the companies that are part of the portfolios of private equity grew by 5.2%, while those who don’t have financial investors as shareholders had their turnover up 3.3%. According to Aifi’s annual survey, in 2018 the investments of private equity and venture capital funds in Italy, hit a peak of 9.78 billion euros. Early stage investments of venture capital funds amounted to 324 million for 110 companies in a trend that had been already shown in the BeBeez Venture Capital Report 2018  (available to readers of BeBeez News Premium 12 months, find out here how to subscribe for just 20 euros per month and read the BeBeez Reports and Insight Views).

After the first trading day, the shares of Nexi, the Italian paytech company, closed at 8.44 euros, down 6.22% (see here aprevious post by BeBeez). The company listed 35.6% of its equity that may arrive to 40.9% if investors exercise the greenshoe option. The firms in charge of Nexi ipo set the price at 9 euros per share (see here a previous post by BeBeez and here another previous post by BeBeez). According to these figures, the enterprise value of Nexi is 7.3 billion euros. The initial price range was of 8.5-10.5 euros. For this ipo, Nexi launched a capital increase of aabout 700 million. Advent International, Bain Capital, and Clessidra sold 125 million shares in the company, remaining with a 62% stake while Banco BPM, Banca Popolare di Sondrio, Banca di Cividale, Credito Valtellinese, and Iccrea Banca will dispose 21 million shares. Paolo Bertoluzzo, the ceo of Nexi, said that the company is not negotiating for m&a transactions now, but it would consider opportunities.

Macquarie Infrastructure and Real Assets expects to receive by the end of May the non-binding offers for Renvico, a renewable energy company (see here a previous post by BeBeez). The enterprise value is in the region of 400 million euros for an equity value of 150 million. The dossier could be of interest to Erg, A2A, Engie, and to sector funds likeQuercus and Tages. Renvico has assets in France with a 50/50 joint venture with KKR, that, according to rumours, has not yet decided whether to sell its stake.

Banca Finint spun off its private equity activities for which are in charge Domenico Tonussi, Nicola Bordignon, Piergiorgio Fantin, and Daniele Mondi, that founded Itago, an indipendent fund with bureaus in Venice and Milan (see here a previous post by BeBeez). Itago will launch its own regulated asset managemnt company (an sgr or società di gestione del risparmio) and has a fundraising target for its first fund of 100 million euros.

Attestor Capital, the owner of 89.3% of Banca Intermobiliare, aims to appoint Jürgen Dennert, previously ceo of Medio Credito Centrale, to replace chairman Maurizio Lauri, and Claudio Moro, the former ceo of Banca Leonardo, as ceo instead of Matteo Colafrancesco (see here a previous post by BeBeez). Shareholders will discuss such appointments during the next meeting scheduled for 30 April. Attestor will propose Massimo Tosato, previously ceo of Quaestio and currently independent board member of Pictet, as board member.

Engineering, the Italian IT company that since 2016 belongs to NB Renaissance and Apax Partners, generated an ebitda of 150 million euros (see here a previous post by BeBeez). In light of these figures, Apax Partners and NB Renaissance, that equally own a total of 88% of the asset, may cash a relevant gain out of the company’s sale. The Cinaglia Family owns 12% of Engineering. Permira and BC Partners are reportedly interest in the asset. Michele Cinaglia andPaolo Pandozy are the chairman and ceo of Engineering, whose value is above 1.5 billion. The company’s net financial debt is of 69 million from previous 138 million.

Shernon Holding  applied for a receivership procedure at Milan Court (see here a previous post by BeBeez). In August 2018, Shernon acquired 55 shops of the Italian furniture retailer Mercatone Uno, whose debt is of 400 million euros and which is in turn through a bankrupcty procedure. Shernon belongs to Valdero Rigoni (ceo) and Michael Tahlmann.

Italian yachts producer Ferretti may list on Milan stock market by the end of 2019 (see here a previous post by BeBeez). Chinese 86.8% owner Weichai may appoint Barclays, Bnp Paribas and Ubs as global coordinator, while Banca Imi, Equita, and Mediobanca may act as bookrunner. Dentons and King & Wood Mallesons may provide legal assistance. Ferretti may list 30-35% of its equity. Alberto Galassi is ceo of the the company that has sales of 623 million euros and net profits of 24 million. Piero Ferrari owns 13.2% of Ferretti. The company could be worth 14X its 2018 ebitda or 750 million  (see here a previous post by BeBeez). Ferretti’s net profit is of 31 million (+29% yoy), sales are of 669 million (623 million), ebitda is of 53 million (59 million). The company is finalising the acquisition of competitor Wally. In early 2012, Weichai invested 178 million euros in equity to take over and rescue Ferretti from default and bought part of Ferretti’s debt from Oaktree, Rbs, and Strategic Value Partners which it later converted into equity. So Weichai owned then a 75% of the company’s equity while Rbs and SVP converted in a 25% stake their remaining portion of debt. Weichai later rounded up its stake in the business and in 2016 Pietro Ferrari, the son of iconic Italian entrepreneur Enzo Ferrari, acquired 13.6% of Ferretti. Previously Schroders Ventures (then becoming Permira after Schroders spun-off its private equity activities) bought out control of Ferretti in 1998 and then listed the company at the Milan Stock Exchange in 2000.  Permira then delisted Ferretti from the Italian Stock Exchange in 2003 and in 2006 sold a 52% stake to Candover retaining an 8%, while the rest of the capital was owned by founder Norberto Ferretti and the top management. The debt burden coming from the the two buyouts brought then the company towards default after the 2008 financial crisis.

Green Arrow Capital acquired the majority of Labware, an Italian producer of payment devices for the Horeca sector (see here a previous post by BeBeez). Paolo Pagnanini, the company’s founder will keep a minority of the business. Labware has sales in the region of 10 million euros and an ebitda of 4.78 million. Green Arrow has resources amounting to 230.6 million and invested 54% of them in three years.

Sator, the private equity fund of Matteo Arpe reportedly aims to change the governance boards of its portfolio company ePrice, the Milan listed e-commerce business, (See here a previous post by BeBeez). Sator holds 20.85% of ePrice, thatPaolo Ainio founded in 2006. The company has sales of 164 million euros, an ebitda of minus 8.8 million (minus 15.3 million yoy), a net loss of 14.6 million (24.7 million yoy). Sator lost 9 million of its initial investment of 21 million in ePrice. For this reason, Arpe now is asking for a strategic management change and aims to appoint as chairman Moshe Sade Bar, a senior partner of venture capital fund TA Capital, together with Francesca Sabatini, Francesca Luchi, Serenella Rossano, Giorgio Gabrielli (ceo of News 3.0, the publisher of online daily Lettera43,  of which Sator owns 80% after having invested 0.5 million), Mariano Carozzi (chief innovation officer of Banca Profilo) and Giacomo Garbuglia. Arpe aims to implement a strategy of growth by M&A in view of creating a pan-european player in the field of the sale of white house appliances. Ainio, Pups, Vis Value Partecipazioni, Pietro Boroli, and Micheli Associati (that together own 32.34% of ePrice) propose as board members Roberto Mazzei, Pietro Boroli, Matteo Bruno Renzulli, Chiara Burberi, Pierluigi Bernasconi, Pietro Galli, Annunziata Melaccio, Roberta Vercellotti, Arabella Caporello, and Raul Stella.

Società Agricola Ferrarini, a producer of parmigiano cheese, applied for receivership to Reggio Emilia Court (see here a previous post by BeBeez). The company has assets of 122 million euros and industrial machinery worth 29 million and had sales of 87 million euros in 2016, profits of 279k euros and debts for 69 millions. Gruppo Ferrarini, the owner of Società Agricola Ferrarini, had sales of 335 million in 2017, an ebitda of 29.5 million, and debts of 250 million.

Lebanese private equity fund K. Invest Holding SAL acquired 49% of spirits producer Nuove Distillerie Vincenzi (see here a previous post by BeBeez). The company had sales of 1.3 million euros in 2017 and an ebitda in the region of 0.11 million

Antares Vision, an Italian company providing inspection and tracking services to the pharmaceutical sector, listed on Milan Aim after it merged with ALP.I, the Spac that Mediobanca launched together with Stefano Giambelli, Roberto Marsella, Massimo Perona, and Stefano Rangone (see here a previous post by BeBeez). ALP.I listed on February 2018 after it raised 100 million euros from investors. The Spac will acquire a 12% of Antares for 70 million euros, of which 50 million through a capital increase, and 20 million through the purchase of shares of the company from the controlling shareholder Regolo. So a 31 million euros extraordinary dividend will be delivered to ALP.I’s shareholders in order to redistribute them the excess to 100 million euros. Emidio Zorzella and Massimo Bonardi founded Antares Vision in 2007. The company has sales of 81.3 million, an ebitda of 20.7 million and net cash of 4.2 million. Antares Vision may invest the proceeds of this listing in M&A transactions.

Ardian’s portfolio company Ace Renewable Holding acquired 20% of Tolve Windfarms Holding of which it already held 80% since July 2017  (see here a previous post by BeBeez). Ardian acquired this stake from PLC System (18%) and an undisclosed 2% owner. PLC System will get 6.03 million euros. The target has sales of 32.62 million, an ebitda of 9.32 million.