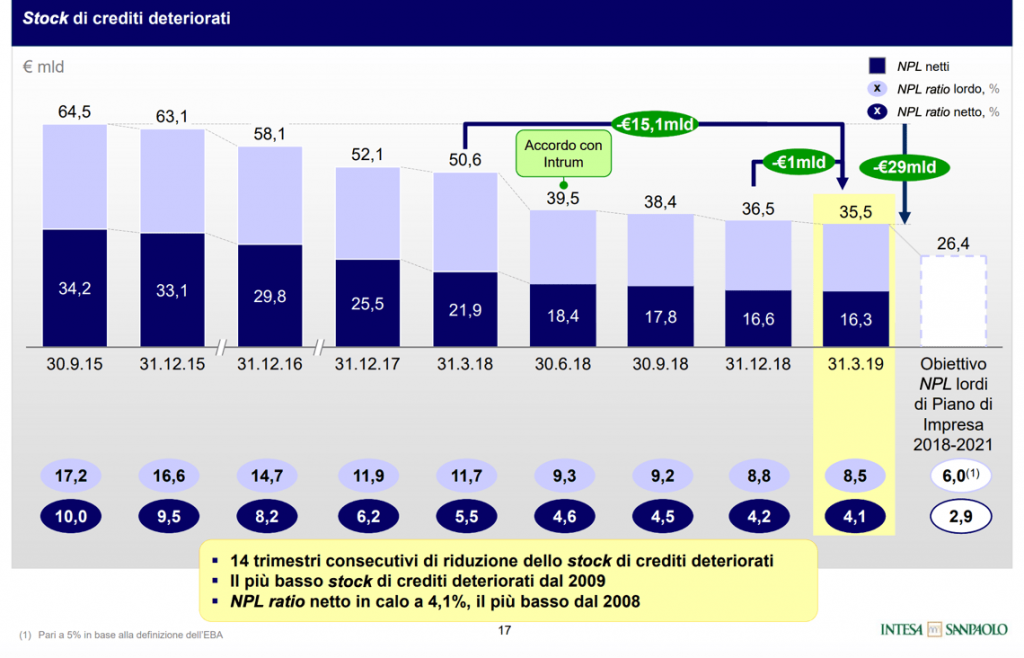 Intesa Sanpaolo is finalizing the sale talks with Prelios for UTP portfolios worth 10 billion euros (see here a previous post by BeBeez). Intesa signed a non binding agreement with Prelios, the servicer that belongs to Davidson Kempner Capital Management. Prelios could pay 50-55% of the face value of 4 billion of credits with a 36.2% coverage. Prelios is also negotiating a servicer role for a portfolio of UTP worth 6 billion that the bank would keep on its books. The due diligence process may end in June. Intesa’s ceo Carlo Messina aims to take the firm’s gross NPE ratio to 6% by end 2021. Intesa’s distressed credits were worth 35.5 billion at March 31st 2018 (down from 36.5 billions at the end of 2018) of which 14 billions were UTPs. The is accelerating the pace of reductionof its NPEs and is well on traack to reach its 2021 goal before time, Intesa Sanpaolo’s ceo Carlo Messina said yesterday adding that a decision about a deal with Prelios will be taken by the end of June or at the beginning of July  (see here a previous post by BeBeez).

Monte dei Paschi di Siena is selling to Sga (Società di Gestione Attività) portfolios of UTPs worth 8 billion euros while is auctioning Utp portfolios Papa2 and Lima (see here a previous post by BeBeez). Sga and MPS may sign a partnership similar to the one that agreed Intrum and Intesa Sanpaolo. The underlying real estate positions for Papa2 are worth 500 million gross. Lima securitised five or six single name credits worth a total amount of 100 million. Mps Gross NPE ratio went down to 16.4% in 2018.

Cassa di Risparmio di Fermo (Carifermo) signed an agreement with Intrum for the management of its distressed credits portfolio (see here a previous post by BeBeez). Carifermo has in its books distressed credits amounting to 200.4 million euros (201.3 millions yoy).

Italian shipping and ferry company Moby, the owner of Tirrenia-Cin, posted an ebitda of 47.5 million euros at the end of 2018 (131.6 million yoy) and a net loss of 62.7 million (net profits of 22.9 million yoy) while saleswere stable at  584.3 million (586.2 million yoy) and its net financial debt went up to 590 millions (496.4 millions yoy). That is why the company broke its financial covenants on senior debt last December (see here a previous post by BeBeez). However, Moby’s lenders reached an agreement with the company for setting new covenants for 2019 and 2020 and set a leverage ratio target of 5,5x by 30 June 2019, 4.5x by 30 December 2019, and 4-4,5x in 2020. However, the price of Moby’s Luxembourg listed bond of 300 million maturing on 15 February 2023 and paying a 7.75% coupon di Moby prices at 42 while S&P’s and Moody’s downgraded the liability to CCC- from CCC+ with a negative outlook and Caa2 from Caa1 with negative outlook last january (on the impaired shipping loans issue in italy see also this Insight View of BeBeez, only for the readers of BeBeez News Premium 12 months, discover here how to subscribe at only 20 euro per month).