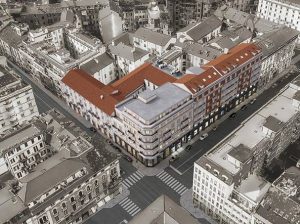 International real estate manger Meyer Bergman has issued a secured bond for  117.75 million euros to refinance the debt contracted for the purchase of the Le Corti di Baires real estate complex in Milan, which is under redevlopment (see the press release here) .

These are secured floating rate securities with partly paid structure, issued by MB CBA Bondco spa (a subsidiary of the MB European Retail Partners fund), which were subscribed by institutional investors and listed on the Third Market of the Vienna Stock Exchange (see the Admission Document here). The legal advisors to the transaction were DLA Piper and the Zabban Notari Rampolla studio.

As mentioned, the issuance of the bond made it possible to carry out the refinancing of the existing debt relating to the Le Corti di Baires real estate complex, located in Milan, between Corso Buenos Aires and Via Petrella (using the portion of the subscription price paid on the date issuance) and will make it possible to provide the funding required from time to time for financing the capex to be carried out on the real estate complex (using the additional portions of the subscription price to be paid later). In May 2017 Meyer had obtained a credit line of about 100 million euros from Unicredit (see MF Milano Finanza).

The building Le Corti di Baires, inaugurated in 1994, has a mixed destination: 8 thousand square meters of retail space, 20 thousand square meters of residential area / offices and about 1500 square meters of parking). It was purchased by Meyer Bergman in December 2015 (see here a previous post by BeBeez). The redevelopment project, which will cost around 200 million euros, was announced last February and is followed in Italy by Kryalos sgr, chosen by Meyer Bergman as asset and development manager. The redevelopment will be carried out by Archeias and Lombardini 22. The project, which should be completed at the beginning of 2021, involves the construction of 160 new apartments on the upper floors and the creation of five large shops on the ground floor, which will be taken over the place of the boutiques opened between 1995 and 2004.