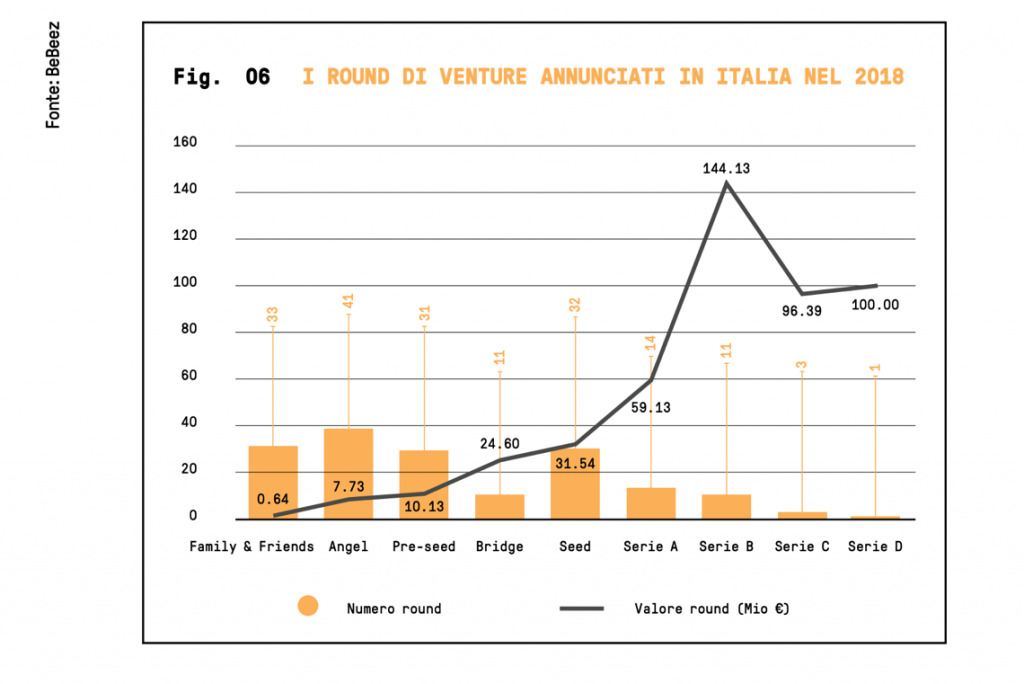 Italian startups attract the investors’ interest for their scale-up stage and round B series, says the Venture Capital Report that P101 and BeBeez . Series B round deals amounted to 11 for a total value of 144 million euros or between 7 and 20 million each (see here a previous post by BeBeez, here the Venture Capital Report P101 – BeBeez 2018, here the BeBeez Report Venture 2018 and here the H1 2019 BeBeez Venture Report,  the full tables and links to stories are available for the readers of BeBeez News Premium 12 months, find out here how to subscribe to BeBeez News Premium for just 20 euros per month). Separately, Refinitiv, the former business Financial & Risk division of Thomson Reuters that Blackstone acquired last year, said that in 1H19 venture capital investments amounted to 5.1 billion euros (+76% yoy), while in the whole 2018 the figure has been of 15.8 billion (see here a previous post by BeBeez).

MainStreaming, a startup that developed cutting-edge technology for the online distribution of videos, raised 6 million of US dollars from Indaco Ventures, Sony Innovation Fund, and United Ventures (see here a previous post by BeBeez). Antonio Corrado, ceo, founded MainStreaming in 2015 and said that will invest these proceeds in strengthening the company’s position in Europe and the US.

Letsell, an Italian startup for the creation of e-commerce sites, raised 750k euros through a capital increase (see here a previous post by BeBeez). Investors from the UK, Sweden, and Spain poured resources in Letsell.

On 30 May at 10 AM will take place the annual meeting of AssoFintech, the Italian association of Italian fintech and insuretech companies (see here a previous post by BeBeez). Milan Chamber of Commerce will host the event (Palazzo Turati, Via Meravigli 9/b). Stefania Peveraro, the editor of BeBeez, will moderate a panel with Danilo Maiocchi, Alessandro Lerro, Federico Vezzani, Aldo Bisioli, Enrica Cremonini, Nicolò Romani, and Fabio Pezzotti.

LCA Studio Legale will implement a blockchain technology for filing and handling its non-material assets (see here a previous post by BeBeez). LCA’s clients may use this platform for protecting their intellectual property (IP), said Gianluca De Cristofaro, head of the IP department of LCA adding that such technology may be useful also for m&a.