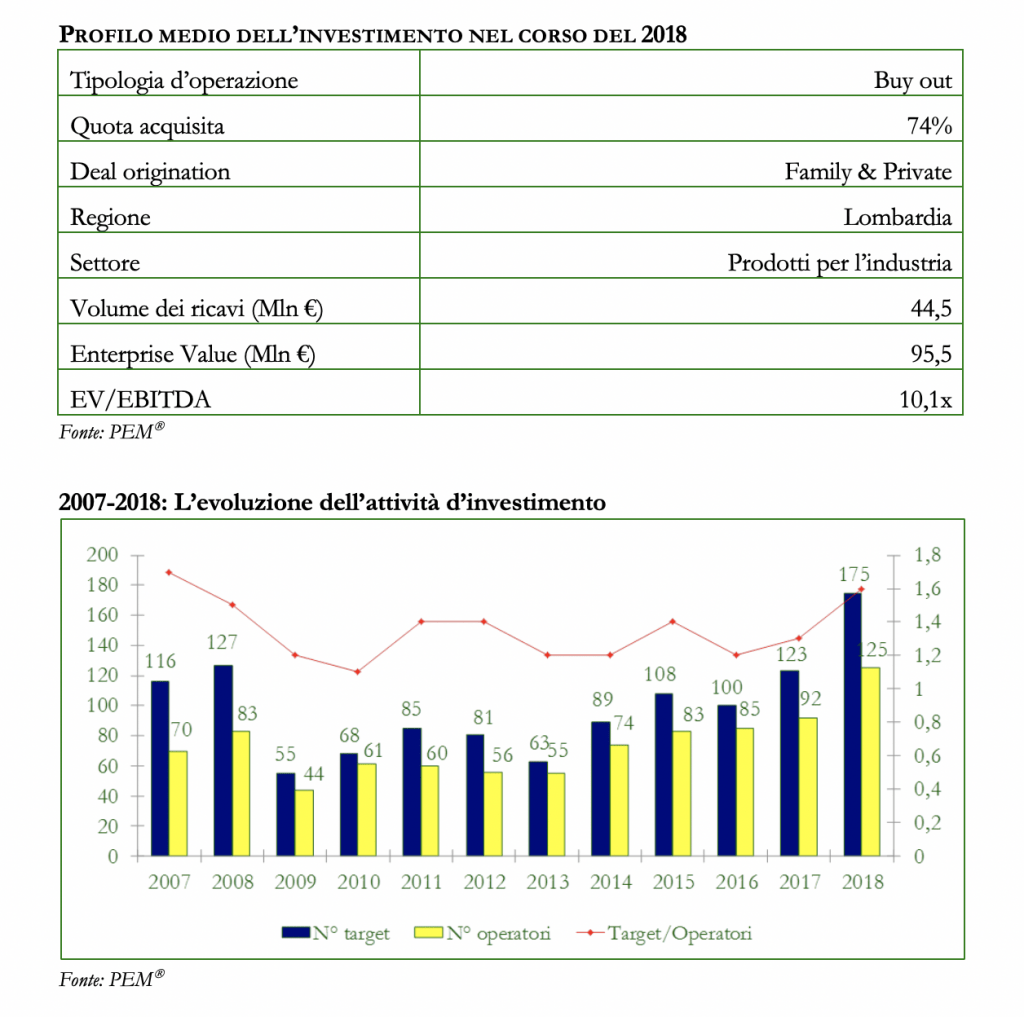 The size of Italian companies targeting private equity funds is increasing and at the same time prices are also rising. This was calculated by the Private Equity Monitor Observatory of the Liuc University of Castellanza, that  presented the results of its 2018 Report yesterday, thanks to support by EOS Investment Management, EY, Italian Investment Fund sgr, McDermott Will & Emery and Value Italy sgr (see the press release here).

The average investment time of the funds in the capital of the target companies remained at 4 years and 8 months, substantially in line with 2017 and shorter than the 5 years recorded in 2016. As for activity levels, 2018 was a year very effervescent. In fact, in the fourth quarter of 2018, the Pem index reached its all-time high. Pem index measures the number of investments compared to the number of investments made in the first quarter of 2000, considered as base 100. In fact, the index reached 458 and for the whole year was maintained at over 300 points, compared to a total of 175 mapped private equity investments, the highest ever recorded since the Pem Observatory. The previous high had been marked in 2008 with 127 operations.

It should be remembered that the number of private equity investments mapped by the Pem Observatory differs from that calculated by Aifi and released last March for 2018 (see here a previous post by BeBeez), because the Pem considers only the first investments by each fund and does not consider the investments of venture capital funds; the Pem data also differs from the one calculated by BeBeez, because BeBeez includes all private equity deals annnounced by any type of investor, not necessarily structured as a fund and therefore also investments made by club deals and the SPACs (to see BeBeez data, please subscribe to BeBeez Private Data).

Returning to private equity funds activity in Italy, the first quarter of this year saw a a drop for the Pem index to 317 points due  to 38 mapped deals, again indicating a good level of activity, even if less marked than in the last quarter of 2018. Finally, it si important to report that 52% of all investments in 2018 were made by international operators. And, in terms of active operators, here too, 2018 has set a record, with 125 operators that have made at least one deal in the year, a sharp increase from the 92 operators of 2017 and the maximum of the last 11 years.