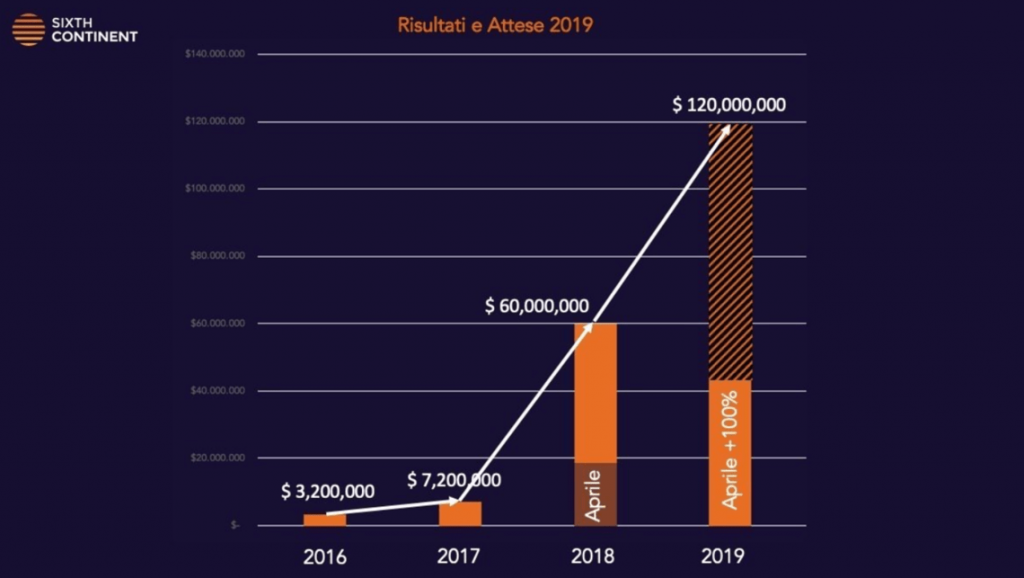 Sixth Continent Inc (SXCI), the US profit sharing and social e-commerce platform that owns Italy’s Sixth Continent Europe (SXCE), launched its sixth financing round with a 20 million US Dollars target to achieve by July 2019 (see here a previous post by BeBeez). The company will invest these proceeds in its organic and international development and the implementation of auditing system SAP in view of the launch of an ipo on Nasdaq or Euronext Paris by 1Q20, said chairman and founder Fabrizio Politi. Politi said that the SXCI is holding talks for a business combination with five US Spacs. In the meantime Sixth Continent Europe launched an equity crowdfunding campaign on the platform 200Crowd with a minimum target at one million euros (see here a previous post b BeBeez).  Matteo Masserdotti, ceo and founder of 200Crowd, said that SXCE is the first well established company to raise resources through the crowdfunding. SXCE has sales of 51 million euros and in 1Q19 posted a turnover of 45 million. Francesca Roveda, ceo of SXCI, co-founded the company in 2009. SXCE’s pre-money evaluation is of 43.47 million, and the upper fundraising target is of 3 million. The crowdfunding campaign started on 1 June and will end on 30 June. The least investment ticket is of 500 euros which will be possible to pay through French e-payment platform Afone Paiment.

Italian scaleup website for booking medical consultations Dottori.it raised a financing round of 3.5 million euros (see here a previous post by BeBeez). Immobiliare.it, the Italian web portal for real estate transactions, led the financing. Dottori.it appointed Angela Maria Avino, the former company’s coo, as ceo. Silvio Pagliani is the co-founder of Immobiliare.it, which also led a 15 million series A financing for Uala, the platform for booking beauty salons and spas that in turn acquired French competitor Balinea.com (see here a previous post by BeBeez). Alessandro Bruzzi, Enzo Li Volti, and Luca Mattivi founded Uala in 2015. The company has sales of 0.182 million, an ebitda of minus 0.635 million and net cash of 82,000 euros.

Mister Worker, the store e-commerce for professional hardware that belongs to Ame Ventures of Michele Appendino, won the Netcomm Award for 2019 for the Digital Export category (see here a previous post by BeBeez). Gianluca Borsotti founded the company in 2012 with the name Attrezzi&Utensili.it and rebranded it as Mister Worker in January 2018. The company generates abroad 70% of its sales.

Equalum, an Israeli startup for real-time data transfer (data beaming), closed a series B round of 18 million of US Dollars (see here a previous post by BeBeez). Planven led the investment together with Italy’s United Ventures, Innovation Endeavors, and GE Ventures. Equalum will invest such proceeds in its European expansion.

Italian fintech startup Yapily raised a seed round of 5.4 million US Dollars (4.85 million euros) from European venture capital funds HV Holtzbrinck Ventures, LocalGlobe, and businessmen Taavet Hinrikus (chairman and co-founder of TransferWise),Ott Kaukver (cto of Twillio), and Roberto Nicastro, the former coo of Unicredit (see here a previous post by BeBeez). Stefano Vaccino, the ceo of Yapily, founded the London based business. The company will invest such proceeds in its organic development.

Italian B2B innovation platform Gellify acquired a minority of Scytale, a startup provider of advanced blockchain-based solutions for cryptography (see here a previous post by BeBeez). Fabio Nalucci is the ceo and founder of Gellify, whileEnrico Alberini is the ceo of Scytale.

MotorK, the Italian startup for digital automotive, acquired French competitor 3W NET, a provider of digital solutions for car makers and vendors (see here a previous post by BeBeez). Guillaume Bugault, the ceo and founder of 3W NET will act as Head of Strategy France for MotorK which borrowed 30 million euros from the European Investment Bank in December 2018 through a venture debt transaction.