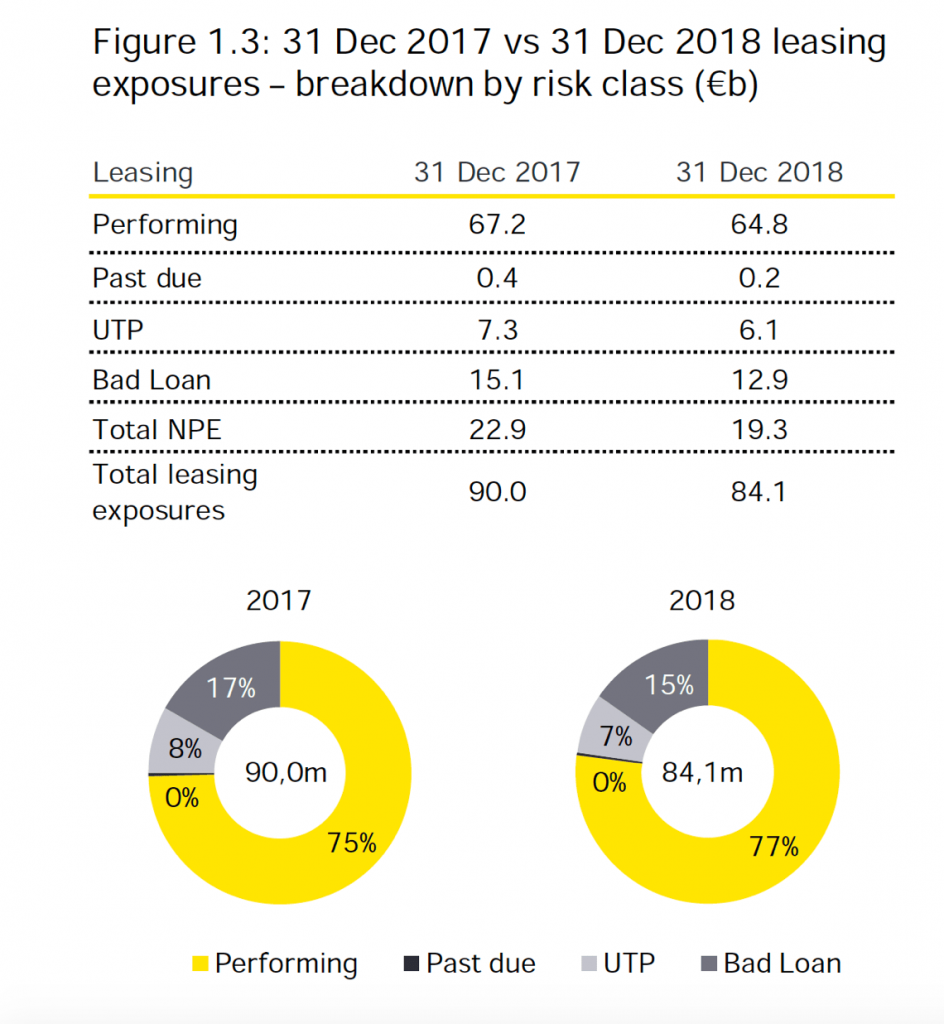 The Italian Leasing Market 2019 of EY said that at the end of 2018, Italian leasing companies had on their books 19.3 billion euros worth of distressed credits (see here a previous post by BeBeez). The total amount of issued facilities is of 84.1 billion. Katia Mariotti and Giancarlo Tardio written the report. In 2018 leasing distressed credits have gone down 15.4% yoy for a 22.9% NPE ratio, minus 2.8% yoy. The net NPE is of 13.4%, minus 2.8% yoy.

Unicredit started the second stage of Sandokan Programme and will allow Pimco, Gwm, and Arec (Aurora Recovery Capital) to act as special servicers for the bank’s portfolio of UTPs (see here a previous post by BeBeez). Unicredit may securitize a portfolio of 2 billion that will sell in a few tranches starting from mid June 2019.

The European Antitrust authority asked Mps and credit servicer Sga to hire an advisor for selling a portfolio of Utps worth in the region of 7 billion euros (see here a previous post by BeBeez). The firms may appoint Oliver Wyman. The advisor will have to make sure that Mps will switch the risk to Sga that in turn will not have to receive a vendor loan.

French credit company MCS-DSO acquired Sistemia, a Rome-based servicer that handles secured and unsecured real estate credits, from KKR (See here a previous post by BeBeez). Sistemia’s ceo is Guido Fienga while Paolo Sgritta acts as managing director. Manager will reinvest for a minority. Sistemia has a turnover of 26 million euros and an ebitda of 8.6 million. MCS-DSO belongs to BC Partners andMontefiore Investment Management.+

Construction company Sapaba, sugar producer Sadam, and factoring firm Felsinea Factor, three companies of Italy’s Gruppo Maccaferri, applied for receivership after other four companies of the group did the same some days ago (see here a previous post by BeBeez). Gruppo Maccaferri has sales of 1.039 billion euros, an ebitda of 118 million, and debt of 750 million. The group’s main lenders are Banca Intesa Sanpaolo, Banca Imi, Unicredit, and Banco Bpm. Maccaferri issued bonds worth 187.5 million. The company has to provide a restructuring plan by 4 November 2019.

On 5 June, Wednesday, Bologna Court said that Rcm, a producer of industrial components, bankrupted (see here a previous post by BeBeez). The company applied for a receivership procedure and held talks for selling a stake to Italian competitor Vrm. However, Rcm financials worsened and Vrm declined to negotiate further. Rcm belongs to Fonderie Officine Meccaniche Tacconi since 2007 and Ducati and Ferrariare some of its clients. Tacconi has sales of 75 million euros, an ebitda of minus 23.7 million, net losses of 103.8 million, and net financial debts of 41.3 million.

Legatoria Editoriale Giovanni Olivotto (Lego), a printing company, issued a 6 million euros minibond with a 7 years maturity and an amortizing structure with a floating rate coupon paying the 6 months Euribor plus 325 basis points (See here a previous post by BeBeez).Unicredit entirely subscribed the bond. Pietro Olivotto founded the company in 1900. Fourth-generation family member Giulio Olivotto is the current ceo of the company. Lego generates abroad 63% of its 99.6 million sales, while the ebitda is of 7.9 million, and net financial debt of 21.1 million.

Italian furniture producer Presotto Industrie Mobili is in receivership (See here a previous post by BeBeez). Ibla Capital will invest one million euros in the company. Presotto generates abroad 40% of its sales worth 16 million euros. The company has an ebitda of minus 0.3 million and net financial debt of 11.85 million.