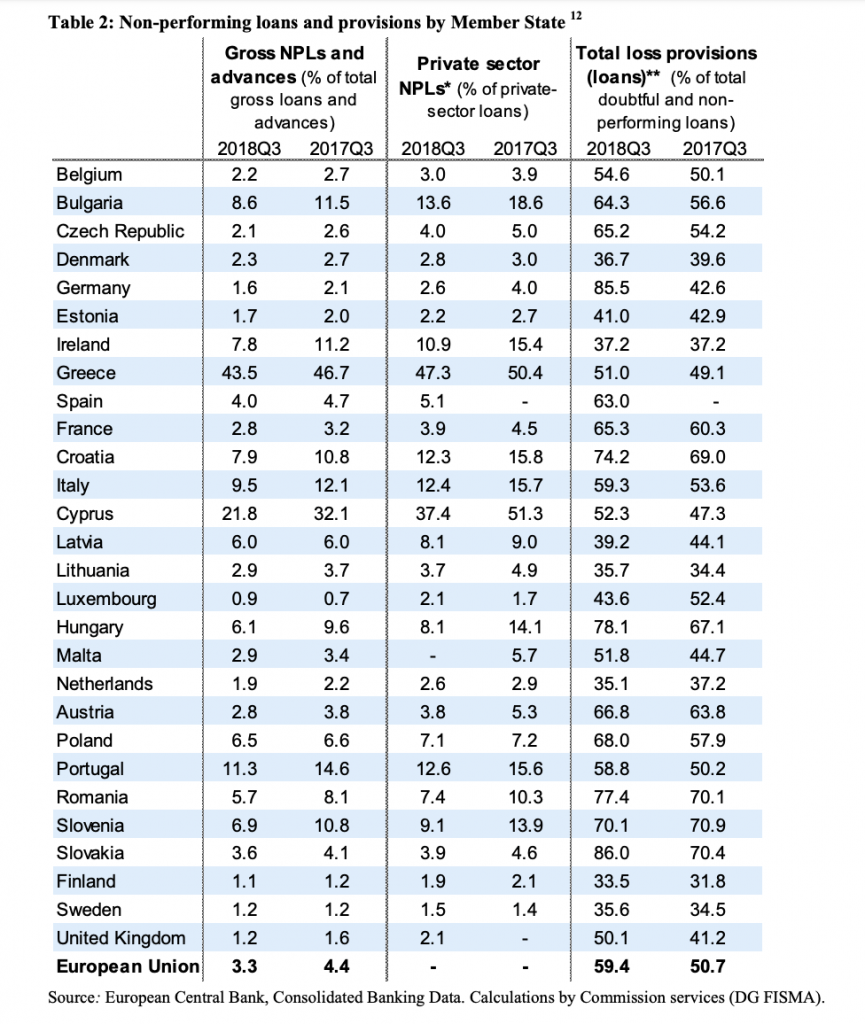 In the last three years, Europan banks sold distressed credits for a face value of 112 billion euros (82 billion in Italy, 24 billion in Portugal, 6 billion in Cyprus) (See here a previous post by BeBeez). The EU Commission provided such figures in its last report about the European Banking Union.

Rodovias do Tietè (RDT), the Brazilian motorways company in which Italian peer  Atlantia has a 25% stake, in on the verge of defaulting (see here a previous post by BeBeez). RDT has still to pay a bond for 230 million di Euros (1 billion of Brazilian Reais). At the end of May 2019, Moody’s downgraded Rodovias rating from Ca to Caa2. Atlantia holds its stake in RdT through a joint venture it signed with the Bertin Family. The bondholders called for a meeting for deciding whether requiring a later payment for the 80 million Brazilian Reais coupon or for converting it in PIK and award a further waiver for the financial covenants. In case of defaults, the bondholders will become shareholders of Rodovias. However, even though bondholders have the issuant shares as collateral, local authorities must authorize the swap of concessions for the company with a new shareholding structure. New shareholders may then provide further resources. For this reason, turnaround and restructuring funds are interested in Rodovias. According to press reports, few advisors say that RdT may convert its liabilities in equity, lower the debt to 5X ebitda, extend the maturities to 12 years with the payment of a coupon worth the inflation rate plus up to 300 basis points. At these conditions, Atlantia could pour resources in RdT.

Italian mushrooms producer Merlini reached an agreement with 85% of its creditors for a debt restructuring (see here a previous post byBeBeez). The company has debts in the region of 18 million euros and will pay back 9.3 million within five years the receivership approval. Merlini may fetch 4.1 million from the disposal of non-core assets. For the next five years, the company’s business plan aims to generate a cash flow of 4.6 million. The company’s shareholders may pour  0.6 million in Merlini. Riccardo Merlini founded the company in 1922. Merlini has sales of 10 million with an ebitda of 0.7 million.

Puglia Sviluppo signed a partnership with Cassa Depositi e Prestiti (Cdp) and three local banks for launching a minibond fund with resources for 100 million euros (see here a previous post by BeBeez). These minibonds will be of 2 – 10 million and an up to 7 years maturity. Every issuer will have a rating.

Sagitta sgr signed a partnership with Crescitalia Holding for launching Short Term Crescitalia Fund (STCF), a direct lending fund (See here a previous post by BeBeez). The company will cash invoices of Italian SMEs with 30-180 days deadline, and an average tenure of 120 days. The fund will invest 50-500k million euros for every transaction. The fund set a fundraising target of 25 – 150 million.

Npl Re Solutions, the distressed credits arm of Gruppo Gabetti, signed a partnership with credit servicer Axactor for managing Npls and Utps (see here a previous post by BeBeez). Gabriele Mazzetta, the ceo of NPLs RE Solutions, and Antonio Cataneo, ceo di Axactor Italy, said that the companies have strong synergies.

Credito Valtellinese (Creval) aims to lower its NPLs by 80% or to 400 million euros from current 1.9 billions within 2023, said ceo Luigi Lovaglio (see here a previous post by BeBeez). Creval will also separate its commercial banking activities from its legacy portfolio of distressed credits that will rebrand as Financial Stakes and Non Core Assets. By 2020, Creval will sell distressed credits worth 800 million for taking the gross NPE ratio below 7% in 2021 and below 6.5% in 2023.

Gruppo PSC, an Italian provider of services for energy systems integration, issued a 25 million euros minibond in which Anthilia Capital Partners sgr and Amundi sgr invested 10 million each, while Riello Investimenti Partners sgr subscribed 5 millions (see here a previous post byBeBeez). The bond is due to mature on 31 March 2025, has a 5.5% yield, an average term of 5 years and an amortizing reimbursement structure that will pay back 70% of the total amount in the last 18 months. PSC has sales of 191.3 million euros (140.9 million yoy) an ebitda of 21.2 million (15.7 million), net financial debt of 67.9 million (25.6 million). PSC will invest the proceeds of the issuance in M&A transactions and its organic development, said chairman Umberto Pesce.

IBL Banca, an Italian retail lender, acquired 9.9% of Italian servicer Frontis Npl through a 4.4 million euros capital increase, on the ground of an enterprise value of above 44 million (see here a previous post by BeBeez). Massimiliano Bertolino will keep his ceo role, while Mario Giordano, ceo of IBL Banca, Massimo Racca, and Giuseppe D’Agostino will join Frontis board. The companies signed a partnership for managing distressed credits through a securitization of up to 50 million.

Italian packaging company INCA applied for receivership with Varese Court (see here a previous post by BeBeez). INCA belongs to the Faverio Family and has revenues of 22.8 million euros, an ebitda of 1.9 million, and a net financial debt of 2.8 million.