Italy’s quality companies are valued 10.2x ebitda on average, which is lower than their European pairs 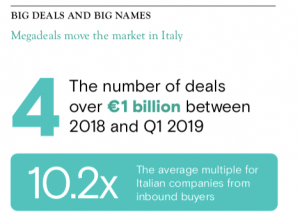 Although Italian companies are of good quality and with good fundamentals, they are valued at multiples that are lower than their European counterparts: 10.2x the Ebitda on average and ranging between 8x for deals under 100 million euros and 11x -13x  for larger deals. This was calculated by Unquote and the Gatti Pavesi Bianchi law firm in their Style and substance. The growth of private equity in Italy report, presented to the press in Milan on July 3rd (see the press release here).

What is this excellent price-to-quality ratio of Italian companies due to? According to Gianni Martoglia, equity partner of Gatti Pavesi Bianchi, Italy from a macroeconomic and financial point of view is a stagnant economy, but at the same time our manufacturing sector is extremely dynamic.

In this regard, Gregorio De Felice, chief economist of  Intesa Sanpaolo, said that the manufacturing sector, despite falling investments, grew by 17% and boasts a 48% export and a surplus of 90 billion a year. “This is an opportunity for private equity, which has the opportunity to buy quality companies with good fundamentals (family and with a good propensity to export, although they are poorly managerial and structured), at a lower price than abroad”, commented Martoglia, underlining also that the low multiples of Italian companies also favor their aggregation by private equity funds, which are thus able to tick larger multiples in less time in view of their exit. There are about 5,000 Italian companies targeting private equity to date.

As for the Italian private equity market, “it is becoming large and stable, despite political and macroeconomic pressures,” explained Julian Longhurst, Head of Data & Research at Unquote. In the first half of this year, deals were closed for a total value of 5.8 billion euros against 8 billions in the same period of 2018, which was a record year both in terms of volume and value of the deal (see here a previous post by BeBeez). According to Unquote calculations, 71 deals were closed in the first half of this year, mainly in the consumer goods (26) and industrial sectors (17).