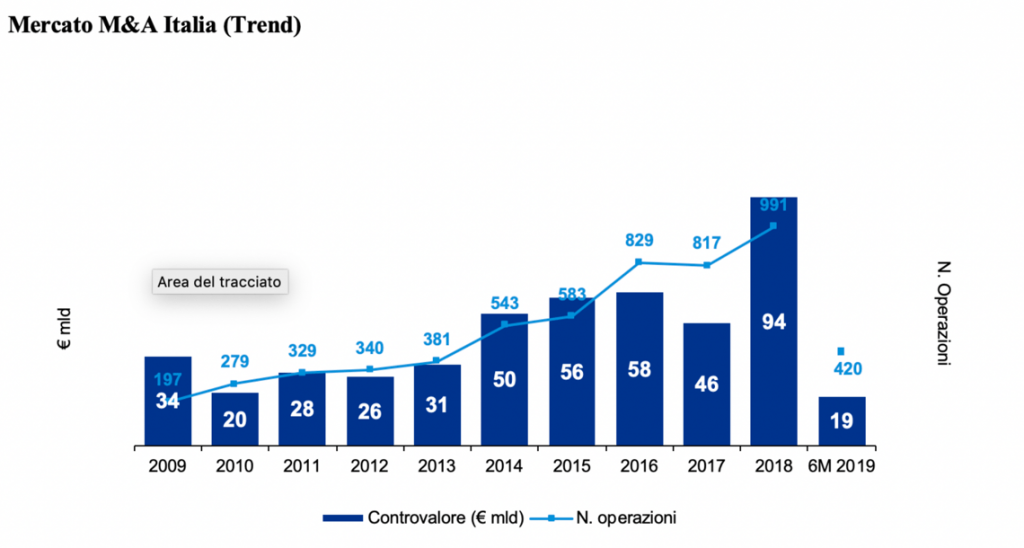 According to Kpmg, in 1H19, the value of Italian m&a transactions has been of 19 billion euros (-41% from 31.5 billion yoy) (see here a previous post by BeBeez). The uncertainty of the Italian macro-economic context, the political instability, and the frictions with the European Union make the transactions of bigger size riskier. Max Fiani, a Partner of Kpmg Corporate Finance, said that the slowdown of m&a is global.

Fintech Holding, a company of Isidoro Lucciola and Riccardo Carradori, sold to to TeamSystem Financial Value Chain the Italian investor in commercial invoices [email protected] and the invoice financing platform Whit-e (see here a previous post byBeBeez). Fintech Holding then reinvested in a 49% stake of TeamSystem Financial Value Chain, that belongs to Teamsystem, an asset of Hellman&Friedman and in which Hg Capital holds a minority.

Solidarietà Veneto, the pension fund of Veneto based companies, strenghtens its exposure to real economy  (see here aprevious post by BeBeez). Paolo Stefan, the fund’s coo, said that Solidarietà Veneto will continue to invest in private equity e private debt and will also invest in infrastructures and real estate with an ESG approach. The fund also started to collaborate with Groupama and Eurizon.

Cinven acquired Jaggaer, an US publisher of software for eProcurement and spend management, from Accel-KKRa nd Italmobiliare, a 9.5% owner (see here a previous post by BeBeez). Italmobiliare’s stake in Jaggaer has a gross value of 100 million US Dollars.

Swidish private equity firm EQT opens its office in Italy in Milan with Federico Quitadamo as managing director (see here a previous post by BeBeez). Swedish family Wallenberg owns 20% of EQT that invests also in infrastructures and venture capital. EQT resources for private equity amount to 10.75 billion euros. EQT is one of the investors that BeBeez Private Data monitors. Find out here how to subscribe to the Combo Version that includes the reports and the insight views of BeBeez News Premium 12 months for 110 euros per month.

Milan listed investment company Tamburi Investment Partners (TIP) will acquire 14.95% of ITH, the owner of 52.8% of Italian listed IT Gruppo Sesa (see here a previous post by BeBeez). Sesa listed on Milan stock market in February 2013 after a business combination with Spac Made in Italy 1. Sesa’s chairman and founder Paolo Castellacci, executive vice president Giovanni Moriani, and ceo Alessandro Fabbroni had 80% of ITH through HSE.and will increaase their stake, while minority shareholders are divesting. TIP invested 17 million euros for this transaction. Sesa has a market capitalization of 450 millioni and is interested in further M&A transaction. Sesa has sales of 1.550 billion.

Sonnedix, a solar energy company of JPMorgan Asset Management, acquired four photovoltaic plants with a 4 MW power (see here a previous post by BeBeez). Sonnedix is interested in further acquisitions for achieving a total power of 200 MW from current 186MW.

Ionisos, a French sterilisation company, acquired Italian peer Steril Milano from founder and ceo Carlo Salvetti (see here a previous post by BeBeez). Steril Milano has sales of 2.72 million euros and an ebitda of 1 million. François Jerphagnon, the head of Ardian Expansion team, said that Ionisos aims to achieve a leadership role through acquisitions. Ardian is one of the investors that BeBeez Private Data monitors. Find out here how to subscribe to theCombo Version that includes the reports and the insight views of BeBeez News Premium 12 months for 110 euros per month.

Qatar Investment Authority (QIA) is holding talks with Elliott for acquiring the control of once glorious Italian football team AC Milan (see here a previous post by BeBeez). Elliott refused a bid of 700-800 million euros from QIA. Previous press reports said that QIA tabled a 550 million bid for listed Italian football team AS Roma, but talks didn’t progress. Milan listed Juventus chairman Andrea Agnelli is also reportedly trying to raise funds in Qatar for diminishing the team’s debt of 500 million. Exor has 63.77% of Juventus and is not going to invest further in the team. However, the Agnelli – Elkann family doesn’t want to give up the team’s control.

French Investment holding Legris Industries acquired Mep Group, an Italian producer of industrial machinery (see here a previous post by BeBeez). The eponymous family owns 70% of Legris Industries. William Giacometti will keep his role as ceo of Mep, that the Magnani Family founded in 1966 and in 2007 sold the asset to Aksia (86.75%),Fondamenta Uno (7.16%,  Fondamenta was liquidated and its stake was sold to Hollyport Secondary Opportunities) and the management (6.09%). Mep has sales of 52 million euros.

Amf Snaps is close to selling a stake to Alpha Private Equity that outbeaten the competition of Ergon Capital (see here a previous post by BeBeez). Amf Snaps is a producer of components for the manufacturing of clothes and leather accessories that sells its products to Burberry, Louis Vuitton, Hugo Boss, and Moncler. Amf Snaps has sales of 54 million euros and an ebitda of 15 million. The company has an enterprise value of 150 million. Alpha aims to implement a buy and build strategy for Amf Snaps. Amf chairwoman Nicole Faerber, the founder’s daughter, and her motherCarmen Toffanello, ceo, currently have 38% of the business and will reinvest for a minority. Italglobal Partners, the investment holding that Ruggero Jenna and Francesco Sala founded, will sell the whole stake that acquired in 2015. Further minority shareholders of Amf Snaps are Matteo Bellotti and Andrea Morante, the former ceo of Italian jewellery company Pomellato and current chairman of turnaround investor QuattroR.

Gianni Mion, Marco Airoldi, Carmine Meoli, Francesco Fumagalli, Matteo Manfredi, and Cristiano Cirulli acquired Augens Capital Partners, a joint venture that Anthilia and Augens Capital founded in March 2018 (see here a previous post by BeBeez). The firm has been rebranded as Koinos Capital  and will raise funds for its private equity activities with a 150 million euros target and a first closing set for October at 100 million. The fund will invest in Italian companies with sales of 30 – 300 million together with its limited partners. Mion will be the fund’s chairman, Airoldi the ceo.