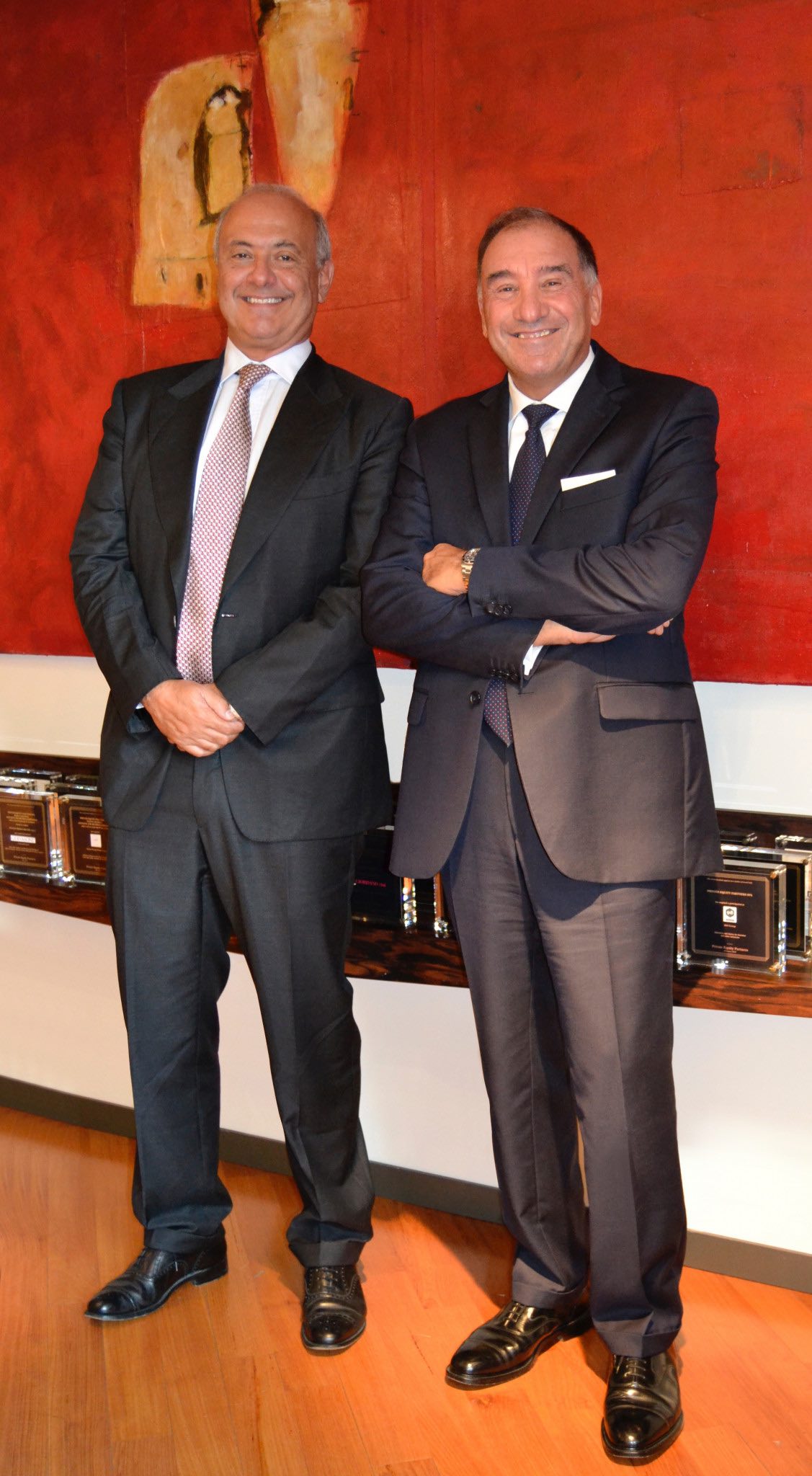 From the left, Giovanni Campolo and Fabio Sattin

Fabio Sattin and Giovanni Campolo celebrate the 30th anniversary of their partnership in private equity in these days. It was in fact September 1989 when the two managers registered their Private Equity Partners spa at the Milan Chamber of Commerce.

“Back then in Italy noone had yet used that denomination, which today is very generic, but at the time it was just new and, from our point of view, sufficiently neutral for us to meet international investors with whom we had previously had relations with another hat “, Mr. Sattin and Mr. Campolo told BeBeez, remembering that they had worked as managers at Chase Investment Bank till then and had participated in the founding of Chase Gemina Italia, an investment venture dedicated to Italian companies and controlled 50% each from Chase Manhattan Bank and Gemina, the holding company whose shareholders included the flower of Italian capitalism, from Fiat to Mediobanca, from Generali to Pirelli to the Pesenti family, and which controlled, among other companies, Rizzoli-Corriere della Sera too.

“Although we did not have shares in the capital of Chase Gemina Italia and we were only managers, for us it was a quantum leap, because we personally put our skin in the game in the search for capital to invest as well as in the search for target companies”, Sattin and Campolo recall when they had to roll up their sleeves to collect the first fund of their life. “The goal was to raise the equivalent of 45 million euros. On this total, Chase Investment Bank had committed 5% and Gemina for another 5%, but the other 90% had to find it ourselves. After one year of work we had found important investors like the Nippon Credit Bank and the Unilever employee pension fund, but we were still in the middle of the way. Then one day we met Henry Hillman in Pittsburgh, Pennsylvania. Tom Swayne introduced us, then head of Chase Manhattan Bank in New York”, the two managers tell. Henry Hillman was the American financier at the head of The Hillman Company, the family office of the eponymous family whose fortune was born at the end of the 1800s in the coal and steel sector, to then grow in the real estate and financial sectors. Hillman passed away at the age of 99 in 2017. Well, Hillman solved the problems of Sattin and Campolo in a while. “How much are you missing to your target?” Asked the financier. “55% of the fund”, the two replied. And Hillman signed the check.

For Hillman it was peanuts. At the time the financier had already invested in the main private equity funds of the world and above all he had helped to start those who later became sacred monsters. For example, in 1976 he had bet on Jerome Kohlberg Jr., Henry Kravis and George R. Roberts, the founders of Kkr (precisely an acronym for Kohlberg Kravis Roberts & Co). Then Hillman was the first subscriber to the first fund of Kkr: he invested 12.5 million dollars on a total endowment of the fund of 31 million (see here Hillman’s biography).

In short, thanks to Hillman, the fund of Chase Gemina Italia took off. The first deal was the investment in MED Antifurti in 1990 and several others followed. In the meantime, however, the Gemina affair broke out, with the accusation of false accounting and the arrest of the top management and the subsequent disposal of all financial investments (see here an article published by Italia Oggi), including that in Chase Gemina Italia, which was then acquired by Chase.

Meanwhile Sattin and Campolo were already caressing the idea of ​​becoming private equity entrepreneurs, through their Private Equity Partners spa. The idea was to find an institutional partner who on one side could acquire part of the shares of the management company together with them and on the other side to subscribe as a sponsor part of the stakes of the second fund. The partner was found in the Italian investment company Mittel, which was involved so much that the second fund, raised in 1998, was named Chase Mittel Capital Fund II. That fund raised the equivalent of around 80 million euros, also thanks to the commitments of Henry Hillman once again, as well as thanks to Chase and Mittel, but also thanks to the chairman of Italy’s biotech Diasorin group, Gustavo De Negri,  and thanks to Alpinvest and Pantheon Ventures. Shortly thereafter, in 2000, Chase merged with JP Morgan, becoming JPMorgan Chase. And Campolo and Sattin were ready to make the final leap towards independence.

The two managers knew that JPMorgan Chase had no more interest in controlling an Italian private equity investment vehicle, and that soon afterwards it would buy Banc One, which had a consolidated experience in the sector. But the two had to find the money to pay the shares  or find an equivalent compensation. They chose the latter way which passed through Poland. Yes, because in previous years Chase Gemina Italia was chosen by the Polish government as the Italian subject in charge of dealing with some of the Polish privatizations.

In fact, Warsaw had then launched a powerful privatization program that included the identification of ten independent subjects from ten different countries with experience in private equity who were to be involved in making Government-owned industrial companies to grow in exchange of high management fees and of a carried interest. Sattin and Campolo then sold their commissions to JPMorgan Chase and their future carried interest deriving from Chase Gemina Polska.

At that point the team was ready to launch its first independent fund. The fund, which then raised 150 million euros in 2002, was named JP Morgan Italian Fund III, because JP Morgan still participated as a sponsor, but in the meantime the team had managed to involve investors of the caliber of ADIA (Abu Dhabi Investment Authority), General Electric, Capital Dynamics and Crédit Agricole, in addition to the ever-present Hillman and Pantheon Ventures. JP Morgan III was one of the first Italian private equity closed-end funds authorized by the Bank of Italy. Private Equity Partners spa, in fact, in the meantime had founded Private Equity Partners sgr spa, one of the first Italian private equity management companies. The last chapter of the fundraising history of the team was then the fourth fund, this time called Private Equity Partners Fund IV, which in 2007 raised 300 million euros, thanks to the support of previous investors plus new investors, including the Singapore’s GIC. “Hillman also followed us into the fourth fund. The last few times he didn’t even wait for us to send him the final documents. He wanted us to go and see him in Pittsburgh, he gave us 25-30 minutes at most, then we left to go back to Italy and at our arrival we found the money transfer already done “, remember Sattin and Campolo with affection.

“We have never had Italian institutional investors in our funds since we became independent”, the two managers again underline, certainly not to denigrate their being Italians, but to highlight how this aspect was a logical consequence of emulation, given the international standing of the first sponsors they had. Above all, they say with pride: “We have never needed a placement agent. Which, however, was also a good saving, if we consider that the market commission is about 2% of what is raised”. 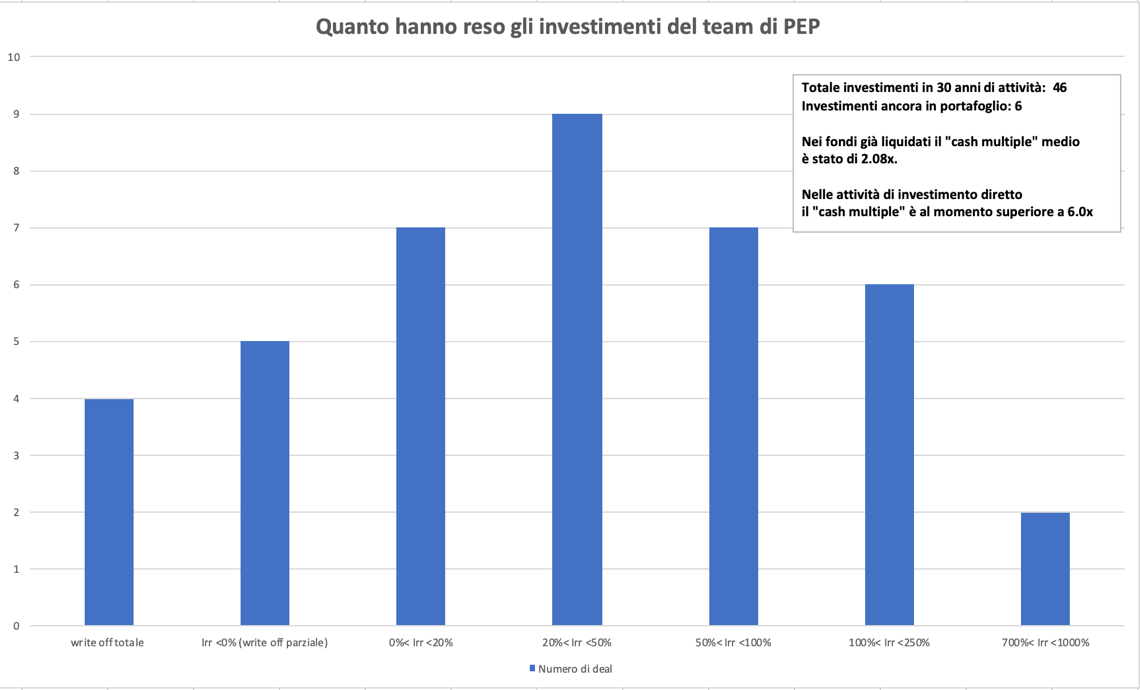 In 30 years of activity the Private Equity Partners team has made 46 investments, of which the last ones have not been made through funds, but directly. The results were very good on average: considering the 40 investments that came out of the portfolios, as many as 24 deals had an IRR of over 20% a year. In the funds already liquidated, the average cash multiple was 2.08x, while in direct investment activities the cash multiple is currently more than 6x.

But then why is it that after all these successes the PEP team has not raised any new fund for more than 12 years? “The moment has passed, at least for us. We now invest personally and directly in smaller companies, we work alongside entrepreneurs and involve other investors like us. We believe this is a very flexible formula that appeals both to entrepreneurs, who find interlocutors on a par with whom to confront, and  to investors, who have full visibility on their investments”. And it’s not just that. “Even large institutional investors now prefer to invest directly rather than underwrite private equity funds. Think of various sovereign funds like ADIA and GIC. There is no doubt that the return on a direct investment is much higher. So you can’t exclude that tomorrow we can lead a bigger deal, in co-investment with any of these subjects “, say Sattin and Campolo.

Among the secrets of PEP’s longevity, in fact, there is also the fact of having been able to diversify its investment activity, moving from traditional closed-end funds, to direct investments, to club deals to co-investments. In addition to the companies still in the portfolio of funds (including Allsystem and Mecaer) among the last successful deals made directly, from 2015 to date, we mention: Nuvò, specialized in digital marketing, sold to Milan-listed accelerator H-Farm (see here a previous post by BeBeez); Italian Design Brands (IDB), the leading aggregator of high quality Italian furniture and design that this year has come to hold the majority of as many as six companies (Gervasoni, Meridiani, Cenacchi, Davide Groppi, Saba, Modar, see here a previous post by BeBeez), and Car Affinity, a social app for buying and selling cars that revolutionizes the way we sell, buy and review cars. As well as the creation of the Special Puropose Acquisition Company, EPS Equita PEP Spac, in joint venture with Equita Group, which carried out the business combination with ICF (Industrie Chimiche Forestali), a company with great potential that produces and exports high-tech adhesives and fabrics in the world, listed on the AIM list (see here a previous post by BeBeez).

“In a sector that has undergone radical changes and alternating moments over the past thirty years”, Sattin and Campolo conclude, “our constant attention to innovation and ability to rapidly adapt to the ever-changing needs of businesses and investors, combined with the our firm and substantial adherence to the business principles that we have set ourselves since the beginning of our activity, has allowed us to achieve this important goal, also thanks to those who have worked with us over the years. In short, the passion is not lacking and the desire to continue to keep pace with the times. The objective is now to capitalize on this long experience to lay the foundations for the future, which we hope will be equally radiant and successful”.