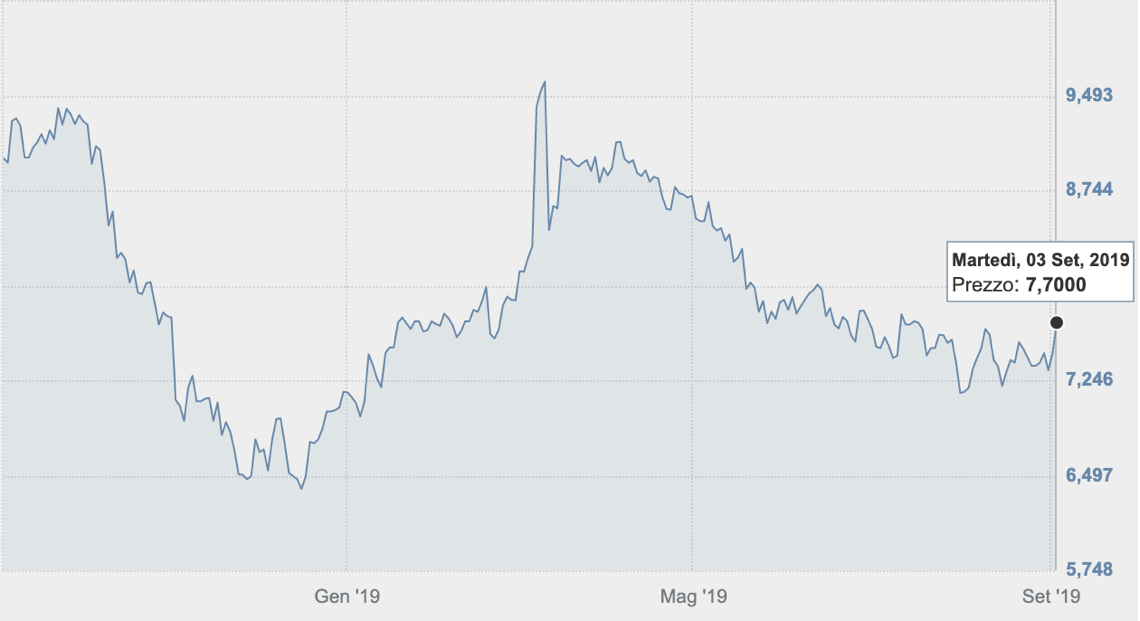 Cerved, a Milan-listed group specializing in business information and credit management, gave a mandate to Mediobanca to explore the strategic options for the future of its credit management division represented by subsidiary Cerved Credit Management Group srl. This was announced yesterday by Cerved  itself in a note in response to rumors anticipated by Il Sole 24 Ore (see the press release here). The note states, however, that “at present such assessments are still at a preliminary stage and therefore the company has not taken any decision on the matter”.

There are many enhancement options on the table, from the sale of the division, to its integration with specialized operators, to industrial partnerships. But, according to BeBeez, in the short-list of possibilities, that of the sale of the division relating to the servicing of non-performing loans could have a certain weight, because it would allow the group to bring important cash home, able to raise its stock quotations, after the change of mind of Advent International on the announced tender offer last March (see here a previous post by BeBeez) and after the termination of the contract with Montepaschi assigning to the credit management platform Juliet, a subsidiary of Cerved and Quaestio Holding, exclusive right in the servicing of a part of Mps’s mega-securitization of NPLs worth 26.1 billion euros (see here a previous post by BeBeez).

The impact on Cerved’s stock price has already been seen yesterday, with the stock closing up 3.29% from Monday to 7.7 euros per share recording the best performance among mid-cap companies listed on the Italian Stock Exchange. The stock had fallen by 12.19% to 8.43 euros on March 11th at Piazza Affari, from the highs reached at 9.66 euros per share on March 7th, after Advent International announced that it was no longer interested in launching a tender offer on the group. That was due to the race of the title after rumors aabout the potential tender offer had spread out on the market in the previous weeks, which  made the transaction no more convenient. Subsequently,  Cerved stock continued its descent, to reach a minimum of 7.14 euros at the end of July. A level that is even lower than the one at which the stock was quoted in mid-January and for which Advent had seen an interesting buying opportunity. Advent had put on the plate 1.8-1.85 billion euros for Cerved’s equity, for an enterprise value of around 2.3 billion euros or 11x  2018 adjusted ebitda which was 208.5 million euros.

Having said that, however, now the Juliet affaire had its weight  and therefore striking an attractive price for Cerved’s credit servicing division is not so obvious. Of course,  the right counterpart is needed, maybe someone who is not yet active in Italy and needs a credit management platform or someone who is already active in Italy but wants to be the protagonist of a market consolidation and therefore wants to grow in size. Who has a profile of the latter type is certainly Credito Fondiario, and it’s not by chance that at the beginning of August it announced that it is studying with Banca Ifis the creation of a joint venture for servicing and investing in non-performing exposures. In particular, the two companies are studying the creation of a new platform capable of working along the entire value chain for the management of non-performing exposure portfolios present in all assets classes (secured, unsecured, baad loans, UTPs, leasing, real estate and consumer credit, see here a previous post by BeBeez).

On the market, therefore, there are those who go so far as to think of a more complex deal, which might see Credito Fondiario as a pivot, acquiring from Banca Ifis its investment and management division of NPLs, Ifis Npl spa, specialized in Npl consumer unsecured , with Banca Ifis that could get a share of the capital of the new combined company in exchange, and in which Cerved Credit Management could also converge.

Indeed, Credito Fondiario is evaluating itself the strategic options for its  future which are, on the one hand, the listing on the stock exchange and on the other the combination with another operator in the credit management sector. At the beginning of July there were rumors of a strong interest from private equity funds like Bain Capital Credit and Cerberus, but there was also rumors of talks with Cerved and Prelios. The latter, however, according to BeBeez, closely follows the story, but in reality the focus of the business of the actors in the field is too different and Prelios is not interested in being part of the game: Prelios is an asset management platform with a specific focus on the real estate sector and, if it is true that it has signed a mega-agreement with Intesa Sanpaolo for the management of 6.7 billion euros GBV of UTPs and for the securitization of other 3 billions, it remains true that most of the UTPd in question, all corporate, have a real estate component to manage (see here a previous post by BeBeez).

Elliott Management, the controlling shareholder of Credito Fondiario, is obviously interested in ensuring that the Italian subsidiary grows in size, so that it can then exit the investment with an adequate return. To date, in fact, Elliott has invested heavily in the project. In recent weeks it has decided to inject another 120 million euros into a capital increase to finance the operation announced last December, with which the Banco Bpm group sold a portfolio of 7.4 NPLs to Credito Fondiario and Elliott and 70% of its credit management platform (see here a previous post by BeBeez). The transaction, which will end formally in the very near future, will further adjust Elliott’s stake in Credito Fondiario, now at 81.53%. This is the second capital increase subscribed by the US hedge fund in Credito Fondiario, after the one of 65 million euros subscribed in October 2018, which had brought Elliott’s direct participation in Credito Fondiario from 40% to 69.48% of the share capital, but it had already been specified then that the stake  would have been incrementable up to 81.53% (see here a previous post by BeBeez). The latter percentage in fact had been reached considering also the stake of Elliott in the holding controlled by the management, CF Holding (the former Tages Holding), and that will be then subject to a reverse merger with the operative company. Elliott had joined Credito Fondiario in 2015, paying 100 million euros for 40%.

Cerved’s Npl division has so far grown and is very profitable: revenues increased by 30.5% in the first half of 2019, compared to the same period in 2018. This is due to the organic growth of the business and the assignments of special servicers hired by Cerved in the management of non-performing loans originating from industrial partnerships and the acquisition of Eurobank by Cerved Property Services, completed last April (see here a previous post by BeBeez). The numbers, however, do not incorporate the negative impact of the termination of the special servicing activities on non-performing loans between the Juliet platform and Banca MPS, which took place last July as said before (see here a previous post by BeBeez). In the second quarter of this year the Credit Management division grew by 26.5%. With regard to adjusted ebitda, in the first 6 months of 2019 it rose 6.4% compared to the same period of 2018, to 111 million euros (from 104.4 in the first half of 2018), of which 30.9 million generated by the Credit Management division. At June 30, 2019, the division had managed 53.3 billion in loans, of which 43.8 billion were impaired (see the press release here).

On the occasion of the presentation of the 2019 half-yearly report, Cerved also announced the acquisitions of MBS Consulting, Euro Legal Services and Mitigo Servizi (renamed Cerved Finline srl). In detail, Cerved bought 100% of Euro Legal Services (a company active in the home collection of unsecured consumer finance credits with an important tax collection network) and Mitigo Servizi (a company active in offering outsourced services in favor of banks, trusts and companies to facilitate access to financial incentives and other facilitated finance initiatives), while it took over a controlling stake in the management consulting firm MBS Consulting and its subsidiaries (see the press release here).