Home Companies Ferretti yacht maker is to debut at Piazza Affari next Oct 16. No dividends will be paid in the medium term
CompaniesOctober 03, 2019Posted By: bebeez
Print Email

Ferretti yacht maker is to debut at Piazza Affari next Oct 16. No dividends will be paid in the medium term 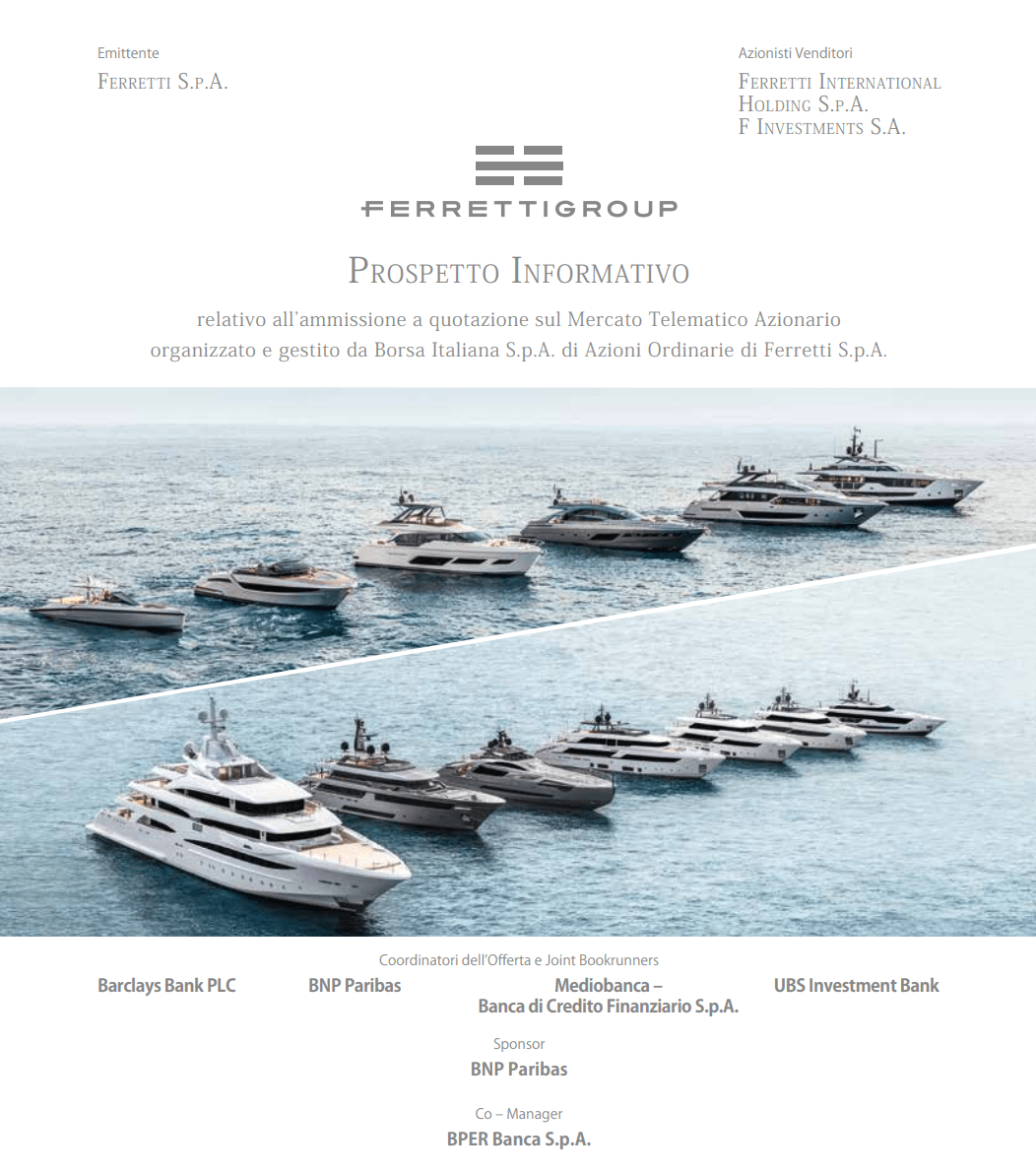 Private placement of Ferretti Group’s shares for its ipo dedicated to Italian and US institutional investors and qualified Italians investors started on October 1st and will bring to market the yacht producer group with an initial capitalization of between 727 million and 1.076 billion euro . The placement will close next October 10 and the landing at Piazza Affari is scheduled for October 16 (see the press release here).

This was announced by Ferretti on Monday 1 October, following the authorization for the publication of the prospectus by Consob. The group had been admitted to listing on September 25th and at the same time had applied for trading on the MTA segment of Borsa Italiana (see here a previous post by BeBeez).

“We are listing a group with zero debts. Ferretti needs to grow, doing different things than what has been done to date”, declared the ceo Alberto Galassi, during a press conference. More in detail, the strategy will focus on five points: complete the yacht portfolio and build the new Wally boat, expand the activities of the Ferretti Security Division, provide services for customers, including brokerage and after-sales, and carry the brand on other products as, moreover, done by Ferrari recently. As for the dividends, Mr. Galassi said: “Year 2020 will be a year of investments. On dividend policy, there is no guidance on dividends”. In reality, however, the prospectus is quite clear on the subject and states: “The issuer did not distribute dividends in 2016, 2017 and 2018 and no dividend is expected to be distributed over the medium term, unless otherwise resolved by the shareholders’ meeting “. 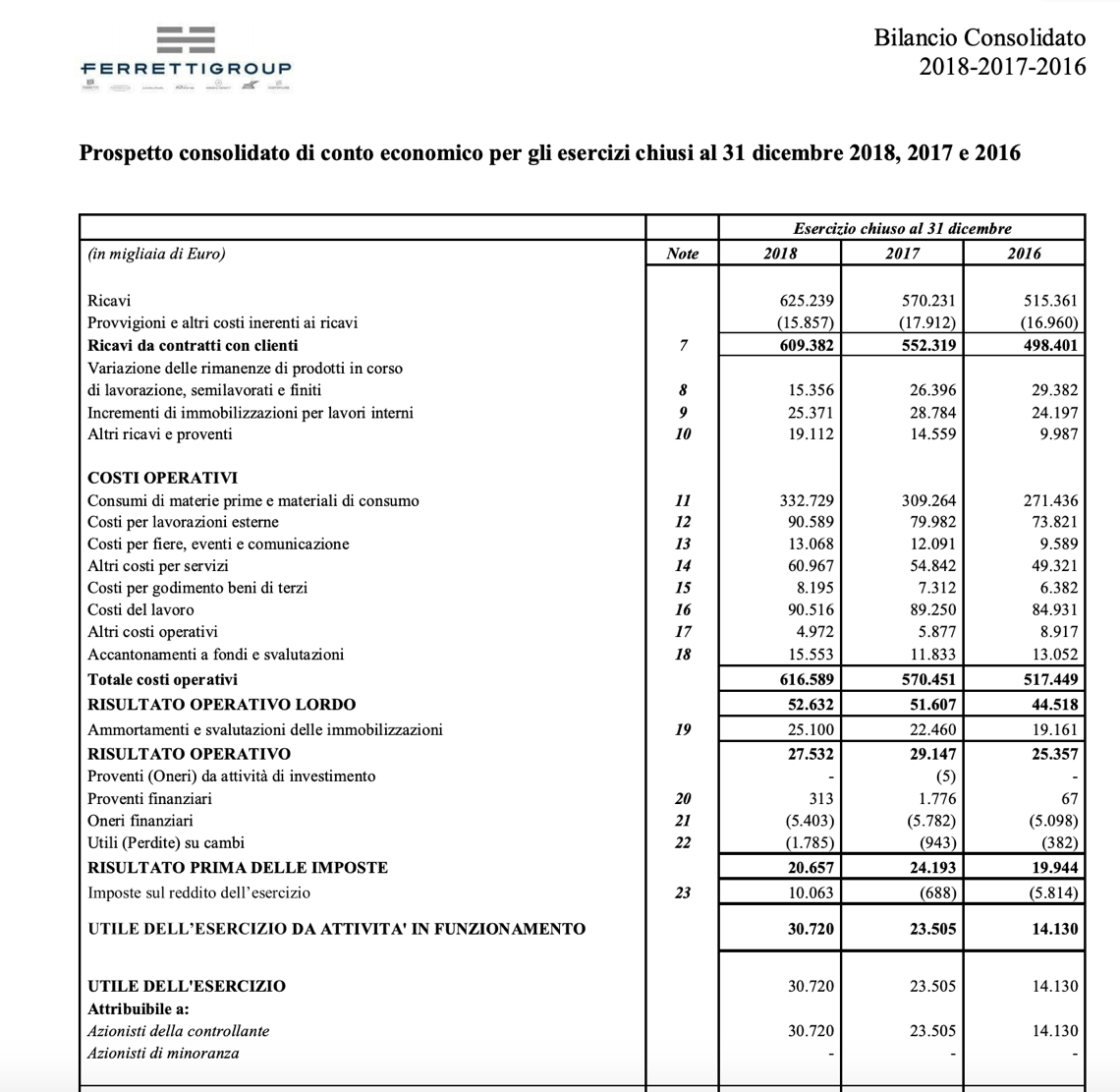 As is known, the price range is between 2.50 and 3.70 euros per share, equal to an equity value pre-money of between 627 and 928 million euros. Last spring, Ferretti’s  enterprise value was said to be around 750 million euros based on a multiple of 14x the ebitda for 2018 which had been just under 53 million against 609 million in revenues (see here a previous post by BeBeez).

Also on October 1, the figures for the first half of 2019 were  disclosed, with revenues up to  332.5 million euros (from € X million in the first half of 2018 an adjusted ebitda in turn rising to 30.2 millions (from 24 millions) and a net financial debt up to 286.3 millions (from  265 millions at the end of 2018), taking into account the impact of the new IFRS 16 accounting standard (without which it would have been  275 millions of net debt). In any case, today  net financial position is essentially neutral: in view of the ipo, in fact, at the beginning of September the Chinese group Weichai (Shandong Heavy Industry), the controlling shareholder with 86.2% of Ferretti, converted its 212 million euros shareholders’ loan into equity (see here a previous post by BeBeez). In addition, Piero Ferrari, son of Ferrari’s supercar founder, who is also a shareholder of Ferretti with 13.6% through F Investments, and Adtech Advanced Technologies, have committed to invest a total of 40 million euros (of which 25 millions already paid by Adtech Advanced Technologies) through a pre-hypothetical capital increase.

As already announced in mid-September, Ferretti’s ipo will include both a capital increase of around 100 millions and the sale of shares by some of its current shareholders. Following the completion of the offer, Weichai will remain the majority shareholder with 51% and Piero Ferrari will remain with around 10%.

Weichai had invested in the yacht group at the beginning of 2012, as part of a complex debt restructuring process. Then the Chinese group had invested 178 million euros in equity and had at the same time bought Ferretti’s debt from the Oaktree fund, Rbs and Strategic Value Partners, which had converted to equity, reaching 75%. At the same time, Rbs and SVP had converted the rest of the debt into equity, reaching 25%. Subsequently Weichai rounded up its quota and in 2016 Pietro Ferrari bought his 13.6%. At the golden age, in 2006, Permira had sold 52% of Ferretti to Candover (maintaining an 8% stake, while the founder Norberto Ferretti and managers had risen to 40%), based on an EV of 1.7 billion euro, versus revenues of 770.4 millions at the end of fiscal year 2006 (August) and an ebitda of 118.4 millions.