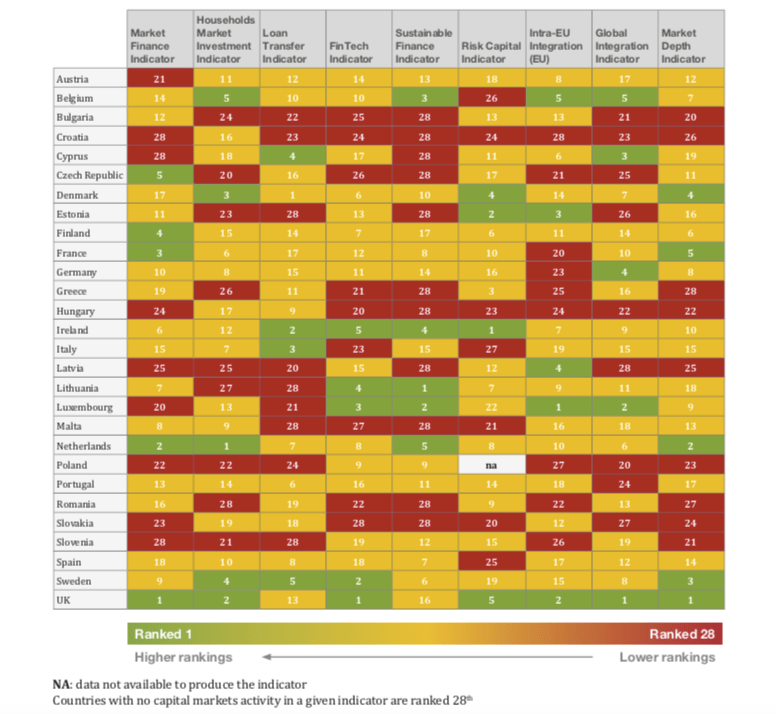 Italy leads the way in Europe for the disposal of NPLs, said a report of Afme (Association for Financial Markets in Europe) about the progress towards an European CMU (Capital Markets Union) (see here a previous post by BeBeez). However, Italy has to improve its financing to SMEs and the development of the fintech sector. Afme indicators include financial markets; private investments; credit transfer; fintech; sustainable finance, and cross border finance. More in detail, 53% of distressed credits in Europe in 2018 have been traded in Italy for an amount of 97 billion euro out of a total of 182 billion. The figures that released AFME for Italy on the ground of the data of the European Central Bank, are similar to the amount of 101 billion that BeBeez calculated for Italy in 2018. BeBeez  elaborated public data (see here the latest BeBeez Report find out here how to subscribe to BeBeez News Premium for just 20 euros per month and read the BeBeez Reports and Insight Views).

Deloitte and Aifi, the Italian association of venture capital and private equity funds, said that in 1H19 the private debt funds in Italy raised 273 million euros (+94% yoy from 141 million (see here a previous post by BeBeez). However, investments amounted to 200 million (-55% yoy). Private debt funds raised mostly from Italian investors (59%), said Innocenzo Cipolletta, the chairman of Aifi. The median term of the operations is of 5 years and 4 months, while 90% of the transaction is worth less than 10 million with an average interest rate of 5.5%. Anna Gervasoni, the general manager of Aifi, said that the Italian market should boost its growth with the help of an anchor investor. Antonio Solinas, DCM Financial Advisory Leader of Deloitte, and Umberto Rorai, a Partner of Deloitte, said that the private debt market can grow further grace to the UTPs opportunities. Giovanni Landi, the founder of Anthilia, and Mauro Sbroggiò, ceo of Finint Investments, said that the political instability and the longer execution times make Italian market less attractive for foreign Investors.

Fenera & Partners, an investor in private equity, private debt and real estate that Giacomo Stratta and Pietro Mazza Midana founded, announced the closing for its new fund of funds of direct lending Fenera European Lending I (FEL) standing at 75 million euros  (see here a previous post by BeBeez). The fund already invested in Crescent European Specialty Lending Fund II, a private debt investor with a focus on SMEs. Gruppo Reale Mutua is one of the investors in FEL, that will close its fundraising in April 2020.

Gruppo Illiria, Sigma, and Gruppo Cittadini dell’Ordine issued their first bond part of the Intesa Sanpaolo Basket Bond programme, that the bank is carrying on in partnership with Elite (see here a previous post by BeBeez). Intesa Sanpaolo is working on the issuance of several tranches of basket bonds amounting to up to 1 billion euros that may involve up to 200 SMEs. The first companies to join the programme have been Gruppo Illiria (10 million issuance), Sigma and Gruppo Cittadini dell’Ordine (3 million each). The bank is negotiating issuances worth in the region of 70 million. Gruppo Illiria and Sigma are vending machines companies with revenues of 53 million and of about 30 million. Gruppo Cittadini dell’Ordine, a private security and surveillance company has sales in the region of 53 million. See here a roundup of BeBeez latest news about basket bonds.

The Lombard SMEs will have the possibility to join Innexta bond, the basket bond programme of the Consortium for credit and finance of the Chamber of Commerce (see here a previous post by BeBeez). Danilo Maiocchi, the general manager of the consortium said to BeBeez is studying a pilot project for allowing investors to liaise with small issuances worth 0.1 – 0.2 million euros of Lombard SMEs and aggregate such bonds in a 5 million worth basket. Innexta is shortlisting the financial advisor, while the Chamber of Commerce of Milan, Monza Brianza, and Lodi together with several local associations of entrepreneurs and Confidi are screening the potential companies for the project. Confidi may act as backer and investor.

The extraordinary administrator of Italian troubled construction company Cooperativa Costruzioni di Bologna, a company with 250 million euros of debt, accepted the bid of Bologna based co-operative competitor Demostene which is now under valuation by the Bologna Court (see here a previous post by BeBeez). Federico Regard, the chairman of Demostene is also the ceo of Consorzio Cooperativo Finanziario per lo Sviluppo (CCFS), a firm that gives financial support to co-operative companies. CCFS owns 35% of Demostene, the same stake as Pegaso Finanziaria, while CoopFond has 30%. Demostene will pay 100% of senior lenders and 14.51% unsecured creditors. The receivership payments amount to 48.4 million, and for these liabilities there is cash available for 24 million. Main unsecured creditors with an exposure of 12 million are BPER, Bcc di Bologna, Carisbo, and Unipolrec. CCF has a senior lender position of 14.8 million that are secured by CCB stakes in Food managers Group Immobiliare and Holmo. Unsecured credits of Unipol Banca, Intesa Sanpaolo, BPER, and Mps with CCB amount to 233 million. Ettore Del Borrello, the commissioner in charge of CCB liquidation, said to BeBeez that Demostene’s bid will allow creditors to cash their dues relatively quickly.

The Italian participants to the NPLs market welcomed the new Italian law for securitizations, said the panelists at the event about Reocos (Real Estate Owned Companies) that Italian servicer GMA and Deloitte held in Milan on 9 October and of which BeBeez has been media partner. However, such reform needs further improvement (see here a previous post by BeBeez). The list of panelists included Emanuele Grassi, the ceo of GMA; Umberto Rorai, a Partner of Deloitte – FSI; Claudio Tierno, a Partner Deloitte – RE; Francesco Trivisano, Manager Deloitte – Tax; Norman Pepe, Partner of Italian Legal Services (a member of the network Gitti and Partners); Edoardo Lombella, the head of non-core Npe at Banco Bpm; Massimo Molinari, Treasurer of Osservatorio TSEI; and Valentina Lanfranchi, tax & legal at Aifi. The Reocos are the special purpose companies set with the aim of handling the real estate assets that back the npls and utps of lenders or of investors (see here the latest BeBeez Report find out here how to subscribe to BeBeez News Premium for just 20 euros per month and read the BeBeez Reports and Insight Views).

Uncredit is carrying on a securitization of a portfolio of NPLs of 6.057 billion euros with a Gacs-backed senior tranche (see here a previous post by BeBeez). This is about one billion more than the 5 billion euros of which the market talked some weeks ago. Scope Ratings is assigning the preliminary ratings of SPV Prisma. Scope Ratings said that the portfolio includes secured (64%) and unsecured (36%) retail distressed credits for primary housing mortgages (90.2% of the value of the real estate aassets) and commercial assets (9.8%). Prisma issued asset backed sercurities for 1.32 billion for a price of 21.8% of the face value. In detail, the issuance includes 1.210 billion of class A senior notes, with rating BBB+; 80 million of class B mezzanine euro notes with rating B-; and 30 million of clas J junior unrated euro notes. Class A and B will pay a floating rate of euribor 6m plus a 1.5% and 9% spread. The principal and the interests for clas J notes will be paid after the reimbursement of senior and mezzanine bonds.

Banca del Fucino closed the announced securitization of its portfolio of distressed credits amounting to 297 million euros, less than the previously announced 314 million (see here a previous post by BeBeez). Zenith Service is acting as corporate servicer and as bondholders’ representative, while AMCO (fka SGA) is acting as a servicer and will subscribe the equity tranche of the securitization della cartolarizzazione. The spv Fucino NPL’s will issue ABS securities of three classes for a private placement reserved to institutional investors

Kruk Italia, the Italian subsidiary of Warsaw-listed investor in Npls Kruk, acquired part of the Mercury Portfolio from Bnl Bnp Paribas for a face value of 162 million euros  (see here a previous post by BeBeez). For Kruk this is the first transaction in the field of Italian corporate Npls. Eleonora Lagonigro is the Corporate Receivables Director of Kruk Italia.