Home Companies Eight italian scaleups to meet in London international venture capital firms next Nov 12th thanks to iStarters. BeBeez will be there
Venture CapitalNovember 07, 2019Posted By: bebeez
Print Email

Eight italian scaleups to meet in London international venture capital firms next Nov 12th thanks to iStarters. BeBeez will be there 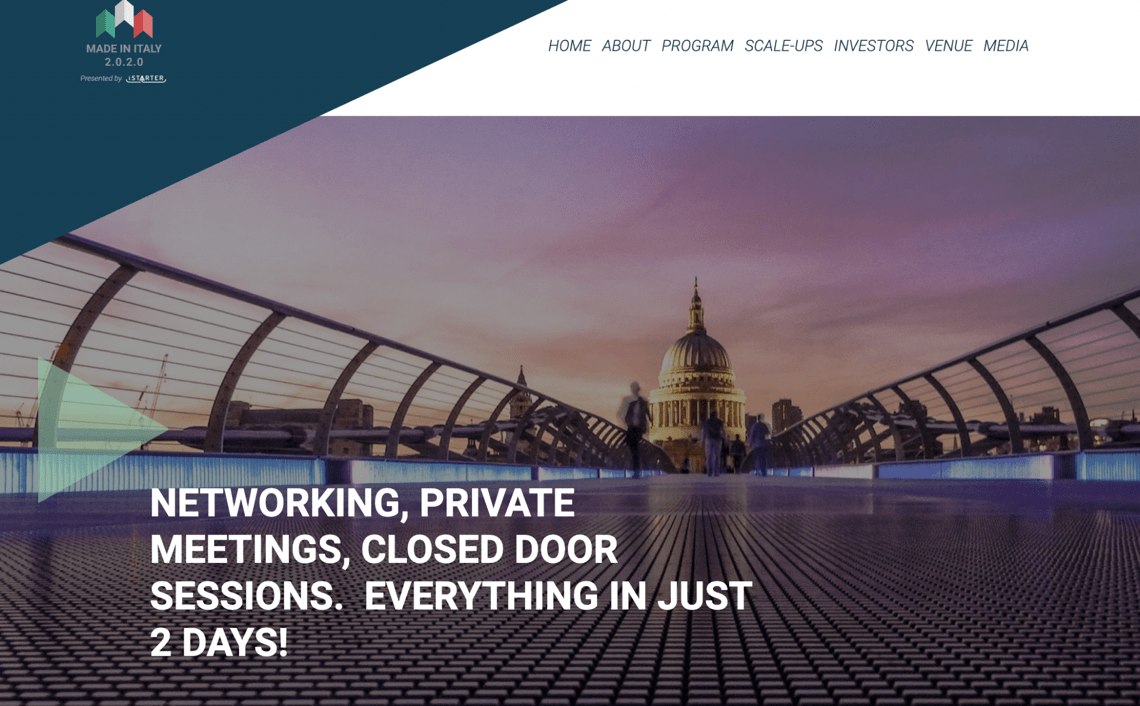 The fourth edition of the Made in Italy 2.0.2.0 event will be held in London on November 12th, promoted by the Italian-English incubator iStarter, which will see eight Italian scaleups, with ongoing financing rounds, present themselves to over 60 international venture capital funds . Among these will be Accel, based in London and Palo Alto, which has invested in companies such as Facebook, Spotify, Deliveroo, Blablacar, Dropbox and even on the Italian company Soldo  (see here a previous article by BeBeez);  Sweet Capital, co-founded by Riccardo Zacconi, the founder of Candy Crash, who created a leading scaleup in the gaming world (see here a previous article by BeBeez); and the French venture capital firm Idinvest.

The event, to be held at Dartmouth House in Mayfair, the business district of the City, will be moderated by Stefania Peveraro, editor in chief of BeBeez and will be preceded by a cocktail at the Italian Embassy the night before. Also the day before the event, the eight participating ceo will visit the Frog Capital, Balterdon and Nauta Capital funds the day before the event. During this “home” tour of the investor, the eight Italian managers will be able to present their projects, ask questions, exchange opinions and business cards with the heads of the three funds.

The eight scaleups were selected by the iStarter team, after months of evaluations, calls, meetings and confrontation with international funds, from around a thousand initial projects. The collected capital of these companies is currently around 17 million euros and what they want to collect with the current round is over 60 millions.

“Very few European countries are able to organize events of this scale. We called the event Made in Italy 2.0.2.0 because we wanted to put digital Italy at the center of the spotlight of international investors and given the numbers of this edition, the mission is complete”, said Simone Cimminelli, ceo of iStarter. “Fifty meetings have already been organized between the eight managers who will participate and some very important European funds and we will start at least another 150 during and after the event. We want to reduce the time and allow investments as soon as possible “.

The total investments raised by the alumni of past editions of Made in Italy 2.0.2.0 exceed 300 million euros. Completely private and with a capital of around 1.5 million euros, iStarter was founded by over one hundred equity partners, all Italian entrepreneurs and managers. Today it counts 30 participations in portfolios for a total of 15 million euros between direct and indirect investments.

Below are the eight scaleups that will take part to the 12 November event.

App Quality, a platform that leverages a “crowd” of thousands of selected and geographically distributed testers, allows you to check in a few hours, that websites, apps, chatbots and any other digital product reach the end user “bug free “And with a memorable user experience. The scaleup has launched more than 2,500 test campaigns for leading companies such as Enel, Vittoria Assicurazioni and Sisal. Founded by Luca Manara, Edoardo Vannutelli and Filippo Renga, starting from the research carried out within the MobileLab, a research laboratory of the Politecnico di Milano, on the Cremona campus, on the most advanced mobile technologies, has in October 2017 received a round from 400 thousand euros from the shareholders of Italian Angels for Growth and those of the Club degli Investitori, the Club Italia Investimenti 2 fund and the Digital360 group (see here a previous article by BeBeez)

Beaconforce, a Saas platform that combines behavioral analysis and artificial intelligence to provide data and information to companies, leaders and employees in real time to improve performance and create more stimulating work environments. Founded in 2016 in San Francisco, today it is present internationally in various countries such as the United States, Canada, England and Italy. It is adopted by organizations of the caliber of Toyota, Unilever, Unicredit and Accenture. Founded by Luca Rosetti, it received an investment from Sequitur Capital last June (see here a previous article by BeBeez) and an investment from Gellify in February 2018.

Entando, a Californian platform co-founded by Italians that enables companies to rapidly develop cloud-native enterprise applications, integrating legacy systems and other data sources already present and offering an innovative user experience. It has over 80 Enterprise customers distributed worldwide. In Italy the solution has been adopted by institutional operators, such as the Ministry of Justice and the Italian Army, and by several other companies related to the world of energy, mobility, pharmaceuticals, travel and personal services. At the end of October it received a financing round from Vertis sgr, through the Vertis Venture 2 Scaleup fund, and from the B2B innovation platform Gellify (see here a previous article by BeBeez).

InVRsion, a digital enabler that transforms an empty space into the most realistic retail experience through virtual reality. He works for leading companies like Auchan, PepsiCo, Ipsos. His 2 solutions are used for trade marketing, research, store design / remodeling. inVRsion wants to revolutionize e-commerce through v-commerce, which will allow a totally new shopping experience and will become the most innovative “digital entertainment system” of the new century. The company has cashed a 400k euros round from the angels of Italian Angels for Growth at the end of May (see here a previous article by BeBeez).

RocketBaby, digital native brand with premium products in the childhood sector, a point of reference in Italy with over 80 thousand active customers and a 100% growth year on year. RocketBaby has developed production processes that allow to quickly produce a wide range of products, cutting the traditional distribution chain and offering high quality products at competitive prices. It now aims at internationalization to bring its business model to the world.

Soul-K (formerly Soul Kitchen), scale-up foodtech B2B that produces fresh semi-finished ingredients, ready meals, as well as developing digital management tools for HO.RE.CA. and the GDO. The company has collected 1.6 million euros with a round bridge in early June (see other BeBeez article) by the IPGest fund, managed by Innogest sgr, and Tan Food srl, both already in the capital of the company since February 2018, when they had signed a 2 million euros round (see here a previous article by BeBeez). The company has worked with over 1,600 businesses throughout Italy and is aiming for international expansion by 2020.

Swanscan, the first Italian cyber security company that owns a cyber security testing platform and a cyber security research center. Recognized by ECSO (European Cyber ​​Security Organization) among the excellence of the sector and among the 20 best European companies in the field, Swascan allows to verify the level of computer security and the level of compliance with the GDPR with a click. In May 2016 he had cashed a 600k euros investment round from Key Capital for a 20% stake (see here a previous article by BeBeez).

Treedom, is the only site that allows people and companies to plant trees and follow them online, directly financing more than 40 thousand local farmers in the world. To date, more than 750 thousand trees have been planted in Africa, Latin America, Asia and Italy, thanks to the contribution of 1,400 companies and 250 thousand users. With its headquarters in Florence, Treedom has just opened in Germany and the United Kingdom, with the aim of becoming the only platform for planting trees globally. In April 2017 it closed a first round of € 2.45 million investment, which was joined by a group of private investors organized in a club deal by Ersel, Antonello Manuli Holding, Rancilio Cube, members of the U-Start Club, Banca Sella through its Sella Venture arm and other private investors (see here a previous article by BeBeez).