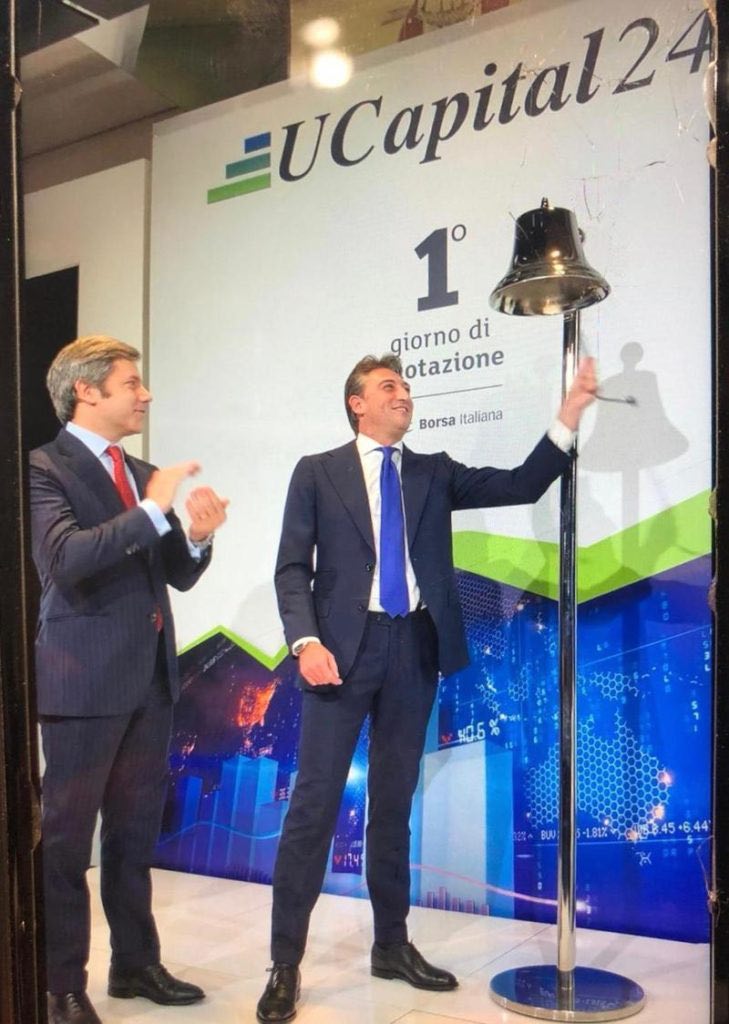 Italian fintech startup UCapital24 listed yesterday on the Aim Italia market after having raised 2,5 million euros from investors and cashed in a 1.5 million euro debt-equity swap (see here a previous post by BeBeez). UCapital24, a global financial social network and social trading platform, was placed in ipo at 4 euros per share equivalent to an 11.4 million euros market capitalization with a floating 19.67% capital. In its first day of trading the company closed at 4.03 euros per share after having touched a maximum at 4,3 euros and a minimum at 3.91 euros (see here a previous post by BeBeez).Investors in the private placement will get one warrant for each share. Board members, employees and consultants will get up to 220,600 warrants for a swap ratio of two warrants for one share. Before the listing, UCapital belonged to the founder Gianmaria Feleppa (85%), the software house company Vetrya (12.5%), and pre-ipo investment veichle 4Media (2.5%). The company foresees to generate revenues of 2.3 million in 2020.

Alessandra Todde, the under-secretary of the Italian Ministry of Economic Development (MISE), said that the Italian Nationl Fund for Innovation (FNI) will act according to the rules that Invitalia Venture will set (see here a previous post by BeBeez). Todde responded to an official interrogation of Italian MP Mattia Mor (Italia Viva party). The MISE previously said that Cassa Depositi e Prestiti will manage FNI which will launch several venture capital funds of funds or investor in innovative startups and SMEs (readers of BeBeez News Premium can download the last BeBeez Venture Capital Report 2019 here, find out here how to subscribe for just 20 euros per month).

Cesynt Advanced Solutions exceeded in a few hours the fundraising targets for the equity crowdfunding campaing that launched on Opstart for e-learning company iSkilled  (see here a previous post by BeBeez). Cesynt launched the campaign on 29 October and raised 0.43 million euros ahead of a 0.25 million target. The campaign will last for a further month in view of raising the upper target of 1 million and list on Paris Euronext with a crowdlisting procedure. Those who will subscribe the campaign on Opstart by 20 November will have shares on the ground of a pre-money value of 7.2 million instead of 9 million. Armando Miele founded Cesynt and in June 2018 raised 0.25 million on Opstart and paid dividends for a total of 50,000 euros. Italy’s investor Innovative-RFK (i-RFK) poured resources in Cesynt (see here a previous post by BeBeez). However, i-RFK is carrying on a crowdlisting as well. In September 2019, the company raised 2.5 million for 23.5% of its equity through a campaign on Milan-listed CrowdFundMe. The company attracted resources of more than 70 investors who poured at least 20,000 euros (35,000 on average) in the asset on the ground of a pre-money value of 8 million. Paolo Pescetto, Massimo Laccisaglia, and Andrea Rossotti founded i-RFK in 2017

On 12 November, Stefania Peveraro, the chief editor of BeBeez, moderated the panel that took place at Dartmouth House in Mayfair on the side-lines of the fourth edition of London’s Made in Italy 2.0.2.0 (See here a previous post by BeBeez). Italian-English incubator iStarter, whose ceo is Simone Cimminelli, launched the event and eight Italian scaleups that are looking for funding met about 70 international venture capital funds such as Accel, Sweet Capital, Idinvest, Frog Capital, Balterdon, Nauta Capital. The following eight startups set targeting investment rounds for a total of above 60 million euros:

Readers of BeBeez News Premium can download the last BeBeez Venture Capital Report 2019 here, find out here how to subscribe for just 20 euros per month).