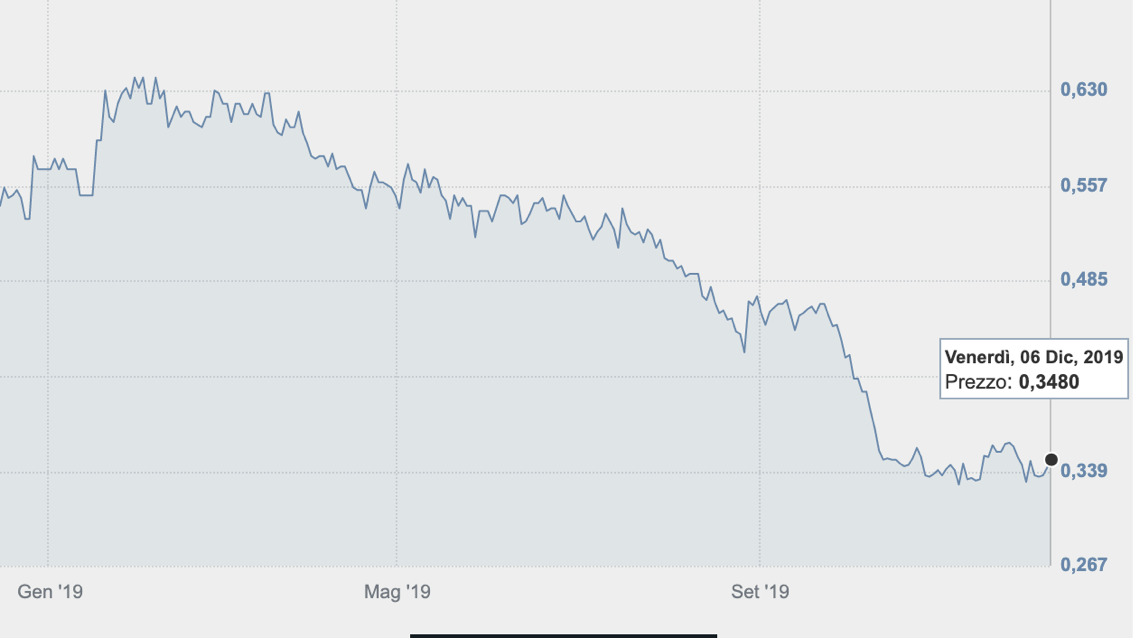 The H-Farm stock at the Italian Stock Exchange

Milan-listed incubator H-Farm will hold a shareholder meeting for 14 December for deciding about a capital increase of 8 million euros that the troubles for H-Campus made necessary (see here a previous post by BeBeez). The Veneto Region delayed by two years the opening of the Campus previously scheduled for autumn 2018. Ca’ Tron – H-Campus (CTHC) financed the operation. Finint manages CTHC, a real estate fund that Cattolica Assicurazioni (56%) subscribed together with CDP Investimenti (40%) and the founders of H-Farm (4%). The project requires investments for more than 101 million. H-Farm decided to launch a capital increase with participatory financial instruments whose subscribers will receive a 0.50% – 2.50% yield. H-Farm shareholders Riccardo Donadon (one million) and Cattolica Assicurazioni (7 million) will invest in such instruments. Cattolica has 4.5% of H-Farm and is part of a shareholder pact that owns 15.3% of the company. Further onwers of H-Famr are Donadon (11%), Red Circle of Renzo Rosso (11%), Giuseppe Miroglio (8.6%) and the Giol Family (6.4%). Former ceo of H-Farm Alberto Minali expressed his disagreement about the recpitalization of H-Farm after having been dischared as ceo but still being a Board member. H-Farm posted 30 million euros in turnover in H1 2019 (in line with H1 2018) but had a negative ebitda for 2,4 million euros (from positive 1.35 millions) and net losses of 5.16 millions (from 0.9 millions of net losses) with a 5.86 million euros net financial indebtment.

Puma, an online retailer of niche perfumes founded in September 2017, launched an equity and reward crowdfunding campaign on Mamacrowd with a target of 0.3 – 0.8 million euros for a 3.7% – 9.3% stake on the ground of a pre-money value of 7.8 million (see here a previous post by BeBeez).  Founder and ceo of the startup is Alessandro Mazzolari. The company aims to reach a turnover of 15 million with an ebitda of 18% in its first five years of activity. The brand Mazzolari is very well knowed in the perfurmery business as it is 70 year old brand, owner of luxury retail perfurmery shops.

In 2019 Club degli Investitori, a Turin-based network of business Angels that Giancarlo Rocchietti founded, invested 6 million euros for 16 transactions (10 for new targets and 6 for follow-on) (see here a previous post by BeBeez). Between 2015 and 2019, the network poured 17.5 million in 28 businesses with an aggregate turnover of above 50 million. Club degli Investitori sold its interests in IndaBox, Directa Plus, and Svinando. The network currently owns stakes in SkinLabo, Genomsys, Growish, Satispay, FrescoFrigo, Myvisto, Wetaxi, Supermercato24, Waterview, Talent Garden, Skuola.net, and Fitprime and further 12 companies.

Ulixes Capital Partners paid 30k euros for a minority of Execus Italia, a startup that is a partner of Linkedin for the training in the fields of social selling, sales navigator, and sales empowerment (see here a previous post by BeBeez). After the investment of Ulixes, Execus launched an equity crowdfunding reward campaign on Mamacrowd with a target of 0.3 – 1 million euros. Andrea Bonabello heads Ulixes Capital Partners, an investor in seed capital and early stage startups and innovative SMEs, that usually pours tickets of 30-50k euros in companies operating in the sectors of AI, Biotech, Cleantech, Edutech, IoT. Execus ceo Andrea Stecconi said that the company will invest the proceeds of this campaign in expanding its foreign operations and its organic development. Execus has sales of 0.747 million and an ebitda of 59k euros.

Anaconda Biomed, a Spanish healthcare startup in which Innogest invested, closed a 20 million euros investment round (see here a previous post by BeBeez). Asabys Partners, Innogest, Ysios Capital, Omega Funds, and Sabadell Venture Capital joined this fourth round of Anaconda Biomed, who raised seed capital in May 201. The company raised 15 million in May 2017 and in January 2018 it attracted investments from BStartup. Anaconda raised a total amount of 35 million and will invest the proceeds of this last round in its organic development, said the ceo Francois Salmon. Claudio Giuliano and Giuseppe Donagemma are Innogest’s founder and chairman. Innogest has bureaus in Milan, Turin, Geneve, and San Francisco, and has resources amounting to 200 million. Between October and December 2019, Innogest appointed Richard Belluzzo as vice-president and Hiroaki Tanaka and Hadi Abderrahim as partners  (see here a previous post by BeBeez). Innogest Capital is one of the investors that BeBeez Private Data monitors. Find out here how to subscribe to the Combo Version that includes the reports and the insight views of BeBeez News Premium 12 months for 110 euros per month.

Italian real estate equity crowdfunding platform Build Around launched on 3 December 2019 a campaign for Milan-based real estate development Molino delle Armi (see here a previous post by BeBeez). The project raised 555k euros, above the target of 500k euros. Marco Ravetta and Leopoldo Orlando founded Build Around in 2018 and received further strategic and financial support from GB PAR, a company of the Borromeo Family. The equity crowdfunding portal received in December 2018 from Consob the authorization to be operative. Orlando said to BeBeez that Build Around may launch further campaign in 2020.

Italy’s xFarm, a startup for the digitalization of agricoltural companies, raised 3 million euros from United Ventures (lead investor) and TiVenture, a venture capital of Fondazione Centenario BancaStato (Switzerland) (see here a previous post by BeBeez). Matteo Vanotti founded xFarm which will invest such proceeds in expanding its operations in Italy, Europe, South America, and Africa and in its proprietary technology.

CrowdFundMe, the Milan-listed equity crowdfunding portal, will start to operate in the real estate sector and in 1Q20 it will implement a secondary market for crowdfunding, said ceo Tommaso Baldissera Pacchetti (see here a previous post by BeBeez). In late November 2019, CrowdFundMe filed with Consob a request for the placement of bonds with a fixed rate coupon to retail investors that own a portfolio of at least 200k euros for a ticket of at least 10k euros.