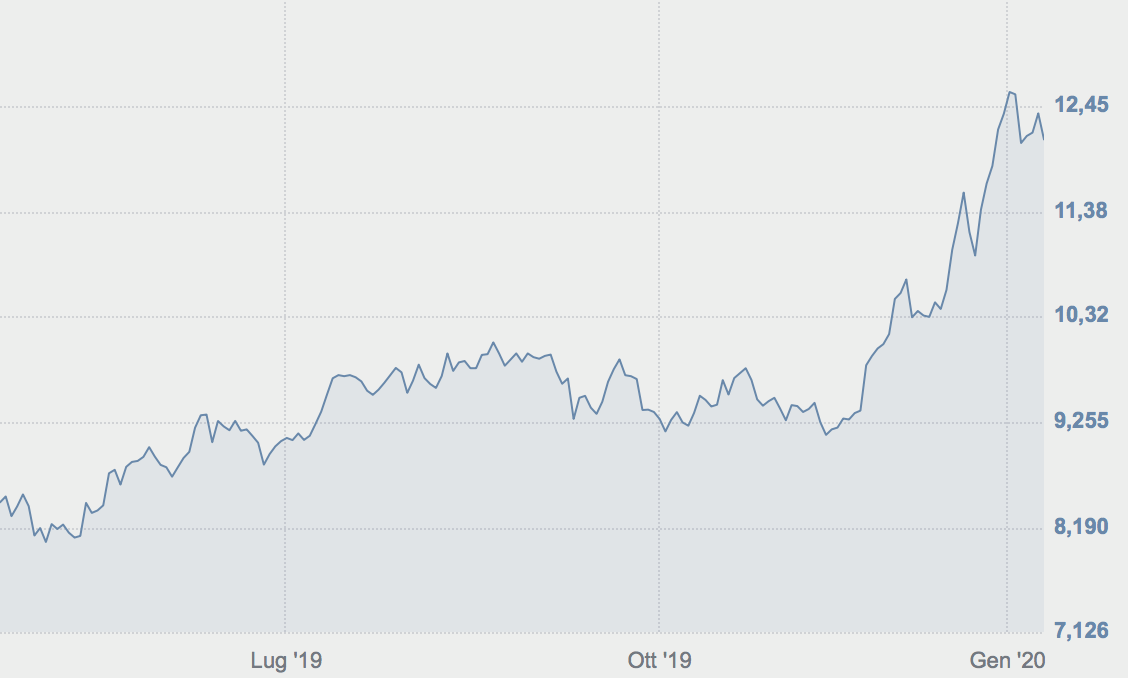 On 9 January, Mercury UK Holdco sold 7.7% of Nexi through an accelerated bookbuilding procedure (see here a previous post by BeBeez). Mercury reduced then its stake of listed Italian e-payment company Nexi from 60.1% to 52.4% and fetched 560 million euros from the sale. At the closure of trading of 10 January, Friday, Nexi share price was of 12,118 euros for a market capitalization of 7.81 billions. Banca Akros downgraded the company from neutral to reduce suggesting a target price of 11,2 euros. Mercury belongs to Advent International, Bain Capital, and Clessidra, who acquired a controlling stake of Nexi in 2015 and listed it in 2019. Nexi is a company that BeBeez Private Data monitors. Find out here how to subscribe for the Combo version that includes BeBeez News Premium.

On 9 January 2020, Centerbridge sold 11% of Banca Farmafactoring (BFF) through an accelerated bookbuilding procedure and raised about 97 million euros (see here a previous post by BeBeez). Rotschild & Co acted as financial advisor to the vendor, while Morgan Stanley has been the sole bookrunner for the transaction. Centerbridge placed 18.7 million shares at 5.2 euros each and diluted its holding in BFF from 32.77% to 21.77%. In February 2018, the fund sold 8.8% of BFF through another accelerated bookbuilding procedure that joint bookrunners Deutsche Bank, Mediobanca, and Morgan Stanley handled at 6 euros per share for a total of 90 million euros. Centerbridge raised 250 millions when it launched an ipo at 4.7 euros per share on Milan stock market and lowered its stake in BFF from 94.2% to 55.8%, while it received 65 million out of a 68.76 million dividend in 2015. Massimiliano Belingheri is the ceo of BFF, of which Apax acquired a stake of 88.35% in 2006. The management took a 3.37% while Bracco, Mediolanum Farmaceutici, and Merck Serono Molteni acquired the rest of the business. Centerbridge acquired the asset in 2015 after having beaten the competition of Blackstone, Cinven, CVC, Lone Star, and Permira. BFF has net adjusted profits of 91.8 million with a 10.9% CET1. BFF issued a Milan-listed bond worth 300 million due to mature in May 2023 and paying a 1.75% coupon.

London-listed iconic luxury cars producer Aston Martin Lagonda, of which private equity Investindustrial founded by Italian financier Andrea Bonomi owns a relevant stake, lost 75% of its market capitalization since the launch of ipo in October 2018 (see here a previous post by BeBeez). The company recently launched a profit warning on its results of 2019: the expected ebitda is of 130-140 million British Pounds (the consensus was of 200 million while the 2018 figure was of 247 million). At the closure of trading of 8 January, Wednesday, Aston Martin shares went down 6% at 408 British Pounds for a market capitalization of 931 million. Aston Martin is said to be of interest to Canadian billionaire Lawrence Stroll who might buy a relevant stake in the asset, according to market rumours.

Milano Investment Partners acquired 37.5% of B2B e-commerce Foodelux for 3 million euros (see here a previous post by BeBeez). Cofounders Andrea Bertoldi and Andrea Salati sold part of their holding and kept 31.25% each. Foodelux was born in 2012 and has sales of 1.3 million euros, an ebitda of minus 199k euros and net cash of 201k euros. Milano Investment Partners is one of the private capital investors that BeBeez Private Data monitors. Find out here how to subscribe for the Combo version that includes BeBeez News Premium.

Fabbri Vignola, a producer of films and machinery for the food packaging that belongs to private equity Argos Wityu, acquired Italian competitor Caveco  from the VellutiniFamily, who will keep a minority of the business (see here a previous post by BeBeez). Banco Bpm financed the transaction. Argos Wityu (fka Argos Soditic) acquired Fabbri Vignola in October 2017 from Lincolnshire Management which acquired 51% of the asset in May 2014 from the Chiarva Family, IGI and German entrepreneur Holger Van Den Heuvel. These shareholders kept 49% of Fabbri Vignola which has sales of 68.4 million euros and an ebitda of 8 million. Stefano Mele is the ceo of Gruppo Fabbri.

Italian luxury shoes manufacturer Aquazzura hired Rothschild for selling a minority stake (see here a previous post by BeBeez). Edgardo Osorio founded the company in 2011. Aquazzurra has sales of 40.7 million euros, an ebitda of 1.53 million, and net cash of 1.6 million.

French Delta Plus Group acquired Italian Boots Company (see here a previous post by BeBeez). Boots Company is an Italian producer of labor shoes and owns the brands of Euromax, Eurofort, and Italboot. The company has sales of 11 million euros, while Delta Group is listed on the B-segment of Nyse-Euronext. Delta has sales of 186.8 million (+9.2% yoy).

M-Cube, an Italian provider of audiovisual marketing solutions for shops and stores that belongs to financial holding HLD Europe, posted sales of above 45 million euros in 2019 (see here a previous post by BeBeez). In December 2019, the company acquired Belgium’s Storever, a provider of in-store radio services and digital signage, while in December 2018 it purchased &Alchemy Digital. In February 2019, M-Cube bougth 66% of Italian startup Stentle and French Carlipa. Manlio Romanelli is the ceo of M-Cube. Francesco Silleni, senior advisor for Italy for HLD Europe between November 2014 and May 2019, carried on the acquisition of 65% of M-Cube in September 2017. Jean-Philippe Hecketsweiler, Jean-Bernard Lafonta, and Philippe Donnet founded HLD Europe, which also received the support of Claude Bébéar (the founder of Axa), Norbert Dentressangle, Jean‐Charles Decaux, Jean-Pierre Mustier, Philippe Donnet, the Cathiard Family, and the De Agostini Family. HLD targets companies with revenues of 50-500 million and in November 2018 opened an office in Milan that Alessandro Papetti heads.

Dutch bicycles producer PON subscribed a 1.6 million euros capital increase and acquired 45% of distributor Focus Italia from founders Luca Sivero and Giorgio Garofoli, and Bemycompany Bike, the club deal of the incubator Bemycompany which acquired 5% of the Italian company for 1.5 million in June 2019 (see here a previous post by BeBeez). Focus Italia has sales of 14.8 million (8 million in 2016) with an ebitda of 0.5 million.

Ambienta acquired Nactis Flavours, a producer and distributor of food ingredients (see here a previous post by BeBeez). Nactis Flavours will merge with AromataGroup, part of the fund’s portfolio since 2018, that in July 2019 acquired the majority of Ipam. French Nactis has sales of above 50 million euros. Aromata has a turnover of 30 million with an ebitda of 5 million, while Ipam revenues are of more than 20 million. Ambienta is one of the private capital investors that BeBeez Private Data monitors. Find out here how to subscribe for the Combo version that includes BeBeez News Premium.

Fortress Investment Group, an US firm that Softbank controls, tabled a bid for Gruppo Maccaferri (see here a previous post by BeBeez). Gruppo Maccaferri reportedly attracted the interest of Oxy Capital and Hps, which made a binding offer of freshe resources for 200 million euros to the company’s advisor Rothschild. In December 2019, Carlyle acquired the Maccaferri’s 190 million bond that is listed on Milan stock market and pays a 5.75% coupon with maturity in 2021. QuattroR, the Italian turnaround investor also expressed interest for Maccaferri. Gruppo Maccaferri has sales of 1.039 billion, an ebitda of 118 million and a debt of 750 million. The company’s main lenders are Banca Intesa Sanpaolo, Banca Imi, Unicredit, and Banco Bpm. Fortress is also studying the Montepaschi dossier and previously provided a 75 million euros bridge loan to the Italian troubled contractor Astaldi as it subscribed together with King Street a Vienna-listed supersenior bond due to mature in February 2022 that later Salini Impregilo wholly acquired. The issuance of this liability could be of up to 190 million.

At the end of 2019, mid-market investor Holding Industriale launched HParts, a subholding focusing on the aftermarket industrial automotive sector, said ceo Claudio Rovere, who founded the firm together with the chairman Luca Ferraris (see here a previous post by BeBeez). HParts holds in its portfolio Air Top Italia, a producer of automotive company that Holding Industriale acquired in 2015.  In October 2019,  HParts purchased Coram and GCP Filter. The three companies generate an aggregate turnover of 18 million euros that may increase to 30 million by 2022. HParts may hit the target through organic growth and M&A. Gaetano Riccio is the ceo of HParts and its portfolio companies. HParts belongs to Holding Industriale (77%) and to a club deal of Italian and international investors.

Panealba-Campiello, an Italian bakery company, acquired buscuits producer Artebianca Natura e Tradizione from Alto Partners (see here a previous post by BeBeez). Panealba-Campiello belongs to the Tesio Family and generates abroad 30% of its 64 million euros turnover. Dolciaria Val D’Enza acquired 90% of Artebianca in 2016, while the target’s founder Alessandro Rovai kept a 10% stake. The private equity sold the asset in 2017 to Valeo Foods, part of CapVest, but spun off Artebianca and kept 78% of the company while the Rovai Family had the remaining stake. Artebianca has sales of 10.6 million and an ebitda of 1 million. Further to  Dolciaria Val d’Enza, Alto Capital recently sold chocolate producer La Suissa and packaging company Virosac. The fund currently owns IPE (a luxury furniture business), Pastificio di Chiavenna (a maker of dietary pasta), Harbor (a manufacturer of cosmetics), Legami (a stationery firm), and Semenzato (a bakery company). In May 2018, Alto Capital raised 210 million and invested in Tricobiotos (a producer of haircare products), Millefili (textile), Bia (food), OFI (nutraceutical and cosmetic products) and Olimpia Splendid (a producer of air conditioning items). Alto Partners is one of the private capital investors that BeBeez Private Data monitors. Find out here how to subscribe for the Combo version that includes BeBeez News Premium.

Bianalisi, an Italian clinical diagnostic company, acquired Italian competitor Laboratorio Analisi Cliniche Forcina based in Lecce area  (See here a previous post by BeBeez). Laboratorio Analisi Cliniche Forcina was born in Seprember 1977 and has sales of 1.92 million euros, an ebitda of 0.611 million and net cash of 0.687 million. Bianalisi belongs to its ceo Giuliano Casini since 2000 and in December 2019 it raised 65 million from Banca Ifis, Banca Sella, and Springrowth. Bianalisi will invest theses resources in consolidating the acquired businesses. The company has sales of 33.5 million euros and an ebitda of 6.3 million.

Mandarin Capital Partners (MCP) acquired Italian coffee producer Daroma, the owner of iconic Italian brands Palombini, Mexico, Giovannini, Nori, Camilloni, and Van Doren (see here a previous post by BeBeez). Daroma’s founder Giulio Santin will hold a minority and keep hs role of chairman and ceo. Mandarin’s partner and founder Alberto Camaggi worked on the transaction. This investment is part of Coffee Holding, a build-up project aiming at the creation of an integrated coffee company. In October 2019, MCP acquired 67% of Neronobile, an Italian maker of tea and coffee that will generate sales of 50 million euros together with Daroma, which has a turnover of 26 million.

Atlantia is holding talks for selling a stake to F2i, said Gianni Mion, the chairman of Edizione, the investment holding of the Benetton Family (see here a previous post by BeBeez). Further to Atlantia, Edizione controls Aspi, Aeroporti di Roma, and Telepass. Such negotiations started on the ground of the reported intentions of the Italian Government to withdraw from the motorway operating concession agreements with Atlantia. Such a revocation would create a liquidity risk for the company. Mion also said that Atlantia may sell a stake in Aeroporti di Roma and Telepass, which in July 2019 hired Goldman Sachs, Mediobanca and Banca Imi to this end.

CM.com, the Ducth platform for b2b CPaaS (Communication Platform as a Service), integrated payment solutions and cloud services, will list on Euronext through a business combination with Dutch Star Companies ONE (DSCO), the Spac with resources of 55.36 million euros that Giovanni Cavallini, Attilio Arietti, Davide Milano, Enrico Arietti, and Oaklins launched (see here a previous post by BeBeez). The shareholders of DSCO and CM.com will hold a meeting on 20 and 21 February 2020 for voting about such merger. Furthermore, the Dutch Central Bank has to authorize the transaction. The cornerstone investors of DSCO may pour further 10 million in the transaction, while Teslin Participaties may invest 15-20 million CM.com has a turnover in the region of 100 million. the promoters of DSCO previously launched the Spacs Industrial Stars of Italy 1 (merged with Lu-Ve), Industrial Stars of Italy 2 (SIT Group), and Industrial Stars of Italy 3 (Salcef)