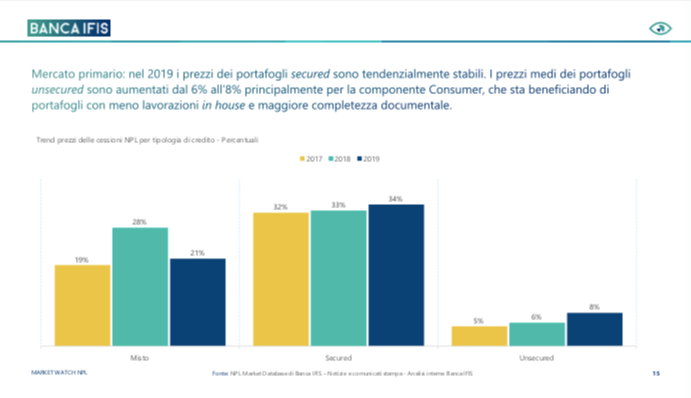 Prices of portfolios of unsecured Npls grew by 8% at the end of 2019 (+6% at the end of 2018) , said the report “NPL Transaction Market and Servicing Industry” of Banca Ifis, (see here a previous post by BeBeez). The prices of secured NPLs portfolios are substantially stable, while the prices of mixed portfolios dropped by 28%. (si vedano qui lo studio completo e qui il comunicato stampa). The report says that in Italy banks have yet to handle 246 billion euros of Npls and 79 billion of UTPs

Cerved Group paid 43.25 million euros for 50.1% of Quaestio Cerved Credit Management (QCCM), the company through which Quaestio Holding and Cerved acquired Juliet, the platform for the management of distressed credits, from Mps (see here a previous post by BeBeez). QCCM had a ten-years contract for the managment of the NPLs of MPS further to be the special servicer for MPS’ 14.5 billion of Npl. Mps sold Juliet for 52.5 million and an eventual earn out of up to 33.8 million on the achievement of targets by 2025. However, in July 2019, Mps withdrew from the ten-years contract with Juliet and settled a payment of 40 million. Cerved is now the whole owner of QCCM. In 3Q19, QCCM and Juliet posted a turnover of 42.8 million, an ebitda of 20.5 million, and net cash of 19.7 million.

Treviso Court accepted the receivership application and debt restructuring plan of Pasta Zara (see here a previous post by BeBeez). The company’s lenders accepted to receive by the next 12 months 33% of their dues (including the minibond of 5 million euros due to mature in March 2019, but except the leasing liabilities), while SGA and Bank of China will get 33% of the loans they provided in the next 5 years. Leasing providers will receive all their dues in 24 months. Furthermore, the Court approved the sale of Pasta Zara’s plant based in Muggia to competitor Barilla for 118 millioni. Pasta Zara belongs to the Bragagnolo family, Friulia (11.25%), and Simest (11.76%). The company has gross financial debts of 241 million (73 million with Banca Popolare di Vicenza and Veneto Banca that are now in the portfolio of Amco fka Sga). Ffauf, the Luxembourg holding of the Bragagnolo family, has debt of 50 million with Bank of China. Pasta Zara broken the 1.80X equity\net cash covenant.

M-Cube, an Italian provider of marketing audiovisual solutions for retailers that belongs to HLD Europe, placed a minibond of 10 million euros that Intesa Sanpaolo subscribed as part of the programme Intesa Sanpaolo Basket Bond(ISBB) that the bank launched in September 2019 (see here a previous post by BeBeez). In October 2019, Gruppo Illiria, Sigma, and Gruppo Cittadini dell’Ordine carried on issuances that are part of ISBB. Click here for a roundup of the latest BeBeez news about basket bonds. HLD Europe acquired 65% of M-Cube in September 2017 under the supervision of the fund’s former senior advisor Francesco Silleni. M-Cube has sales of above 45 million and in December 2019 it acquired Belgium’s Storever, a provider of services for radio in-store and digital signage. Jean-Philippe Hecketsweiler, Jean-Bernard Lafonta and Philippe Donnet are the founders of HLD Europe, which attracted the resources of Claude Bébéar (the founder of Axa), Norbert Dentressangle (the founder of the eponymous group), Jean‐Charles Decaux (the founder of JC Decaux), Jean-Pierre Mustier (ceo of Unicredit), Philippe Donnet (ceo of Generali), the Cathiard Family, and the De Agostini Family. Alessandro Papetti heads the Italian operations of HLD in Milan.

Cris Conf, the owner of fashion brand Pinko, received a financing of 81 million euros from Cdp, Unicredit, Intesa Sanpaolo, Banco Bpm, Ubi, Crédit Agricole Italia, and Banca di Piacenza (see here a previous post by BeBeez). Daniele Pini, the cfo of Pinko, said that the company will invest such proceeds in rebalancing its financial structure. Federico Bonelli is the company’s general manager, while Pietro Negra is the chairman and ceo of the business that he founded with his wife Cristina Rubini. Pinko has sales of 220 million (210 million yoy), an ebitda of 31.5 million, and a net financial debt of 53 million.

Compagnia Tecnica Motori (CTM) received a 35 million euros financing from Banco Bpm, Crédit Agricole Italia, Banca Nazionale del Lavoro, Intesa Sanpaolo, and Ubi Banca (See here a previous post by BeBeez). The company will invest such proceeds for supplying Technip France with 12 emergency diesel generators (110 MW) that are part of the project Arctic 2 LNG, based in Russia. CTM has sales of 54 million and an ebitda of 3.62 million.