VeM Report, 2019 was a record year for Italian venture capital which saw investments for a total of 650 mln euro 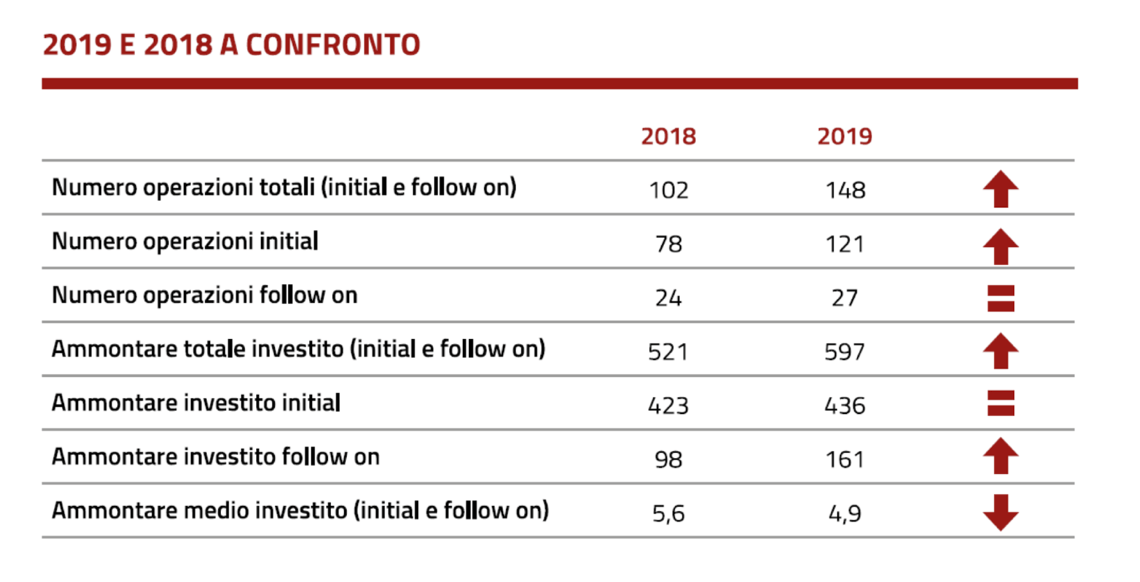 It was a year to frame, 2019, for the Italian venture capital, with an absolute record of deals. This is what emerges from the twelfth edition of the Venture Capital Monitor – VeM research report, presented yesterday in Turin, on the occasion of the VentureUp event at the Officine Grandi Riparazioni, and created by the Venture Capital Monitor Observatory of the LIUC Business School – Carlo Cattaneo University in Castellanza in collaboration with AIFI (the Italian Association of Private Equity, Venture Capital and Private Debt), Intesa Sanpaolo Innovation Center and E.Morace & Co Law Firm.

According to the report (see the press release here) 148 Italian venture capital deals were closed, including the initial rounds and follow-ons, compared to 102 in 2018 (see here a previous article by BeBeez and here the 2018 Vem Report) , but with a real boom in the initial deals, which grew by 55%, from 78 to 121, while the follow-on remained stable, as a number, from 24 to 27. The increase reflected in the volumes invested, whose total went up from 521 to 597 million euros, but in this case follow-ups are recording a surge, going from 98 to 161 millions, with an equally striking increase in the average amount of the individual investment, from 4 to 6 million. These data consider investments made by venture capital operators (including corporate operators who invest directly or through dedicated vehicles and including public operators who have used private legal vehicles) alone or in syndication with business angels. If we also consider the investments conducted by business angels alone, they have made 88 deals for a total investment of 53 million euros, from 147 deals mapped in 2018 for a total of 40 million (data from Iban, Italian Business Angel Association). This brings the total venture capital investments of the year to 650 million (from 561 million in 2018).

These numbers compare with those of BeBeez’s Venture Capital 2019 Report (available for subscribers to BeBeez News Premium) which takes into account the investments publicly announced by venture funds but also by business angels and other investors and which has mapped round announcements of ventures closed by 243 between startups and scaleups for a total of approximately 565.6 million euros, up sharply from 510 million euros, split over 179 companies, registered in 2018. These data include not only the pure equity collected by the companies , but also venture debt and equity crowdfunding (net of real estate campaigns). If we do not consider venture debt, the figure for 2019 drops to 510.6 million and that for 2018 to 480 million, indicated in the BeBeez Report on venture capital 2018.

The growth of the resources invested in the follow-ons “shows how the venture capital fund’s activity is not limited to a simple initial investment, but represents the start of a path that sees the operator supporting the project”, commented Anna Gervasoni, AIFI general secretary and president of the Scientific Committee of the Venture Capital Monitor – VeM.

As for the type of operations, 51% of deals prevail, relating to start-up capital, followed by 35% of seed capital operations (in practice the establishment of a company), and the rest represented by later operations stage capital.

Geographical distribution leads Lombardy with 45 operations, 45, covering 37% of the market (they were 36 in 2018). Piedmont follows with 15 deals, 12% (3 deals in 2018), Emilia-Romagna, 11 operations, 9% (2 deals in 2018). It should be remembered that Milan and Turin are among the most important incubators of innovative companies, such as those belonging to the Polytechnics of their respective universities.

At the sector level, ICT monopolizes the interest of venture capital investors, representing a 44% share (it was 37% in 2018), in line with past years; in this category, we highlight the spread of web and mobile applications attributable to innovative apps. The financial services sector increased thanks to the significant boost from Fintech, with 15% following Healthcare, 12%.