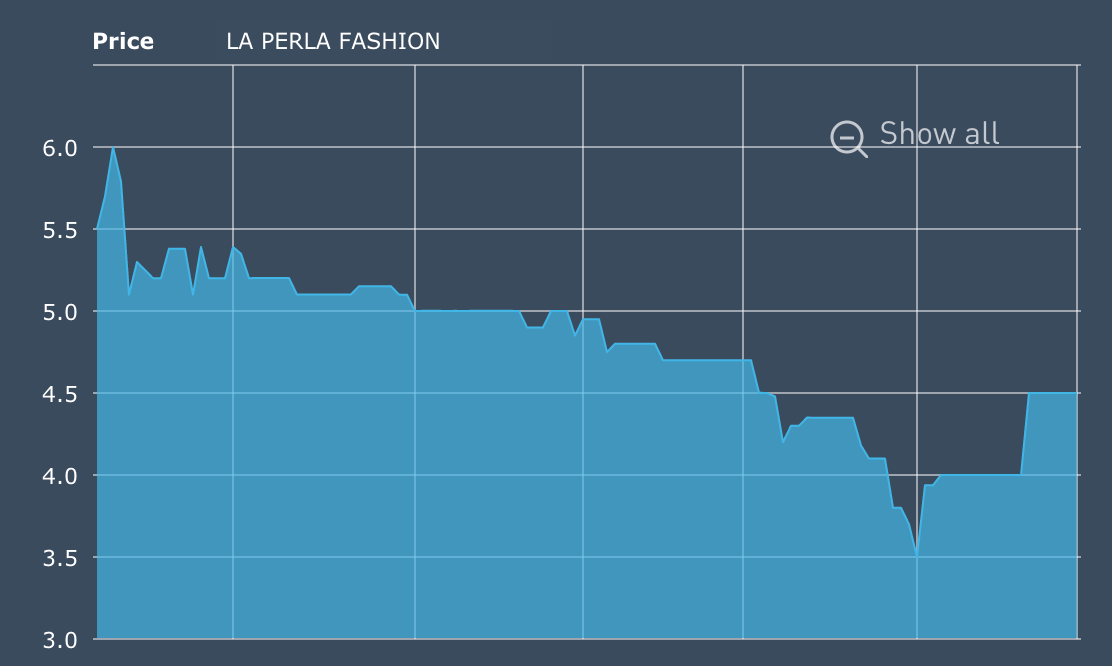 La Perla said with a note published a few days ago, adding that that the increase will concern a total of 44.5 million shares, which will be placed to institutional investors at the price of 4.50 euros each (see the press release here). The capital raised will be used by La Perla to repay part of the debt and thus strengthen the capital structure, but also to finance its future acquisitions.

La Perla is headed by the Dutch Tennor Holding (former Sapinda) owned by the financier Lars Windhorst. The brand has landed at Euronext on September 6, 2019 with a direct listing, i.e. a listing without sale of shares or a capital increase (see here a previous article by BeBeez). The purpose of the listing was to increase the visibility of the company and improve access to capital in order to relaunch it.

The share price had been set at 4.50 euros for a capitalization of 473 million, after the company had raised 23 million in a private placement capital increase with five new investors in May 2019, including Heritage Travel & Tourism , but above all H2O Asset Management, the asset manager of the Natixis group whose funds had been the object of a general stampede by investors last June 2019, precisely because a large exposure to companies associated with Windhorst had been revealed, especially through investments in illiquid bonds, including that of La Perla. Which could now be repaid thanks to the announced capital increase.

Windhorst, through La Perla Fashion Finance, 100% controlled by Tennor, had issued at the end of February 2018 a 500 million euro bond expiring in March 2023 and 7.25% coupon, for the acquisition of La Perla, with H2O exposed to issue for over 300 millions.

La Perla, founded in Bologna in 1954 by Ada Masotti as an artisan workshop, has been in a state of crisis for years. The company was led and controlled by the founder’s son, Alberto Masotti, until October 2008, when it was sold to JH Partners, a San Francisco-based private equity firm focused on investing in service companies and luxury brands. . However, the group had entered a crisis and ended up in a judicial auction in June 2013, at the end of which it had been taken over by Sms Finance, the holding company of the founder of Fastweb, Silvio Scaglia. The latter had relaunched the company, investing a total of 350 million euros. However, the group had not yet managed to reach the breakeven and, compared to about 150 million euros in revenues, at the end of 2017 it still lost 80-100 million. In February 2018, after an exclusive and inconclusive negotiation with the Chinese conglomerate Fosun, the acquisition by Sapinda Holding was announced unexpectedly.