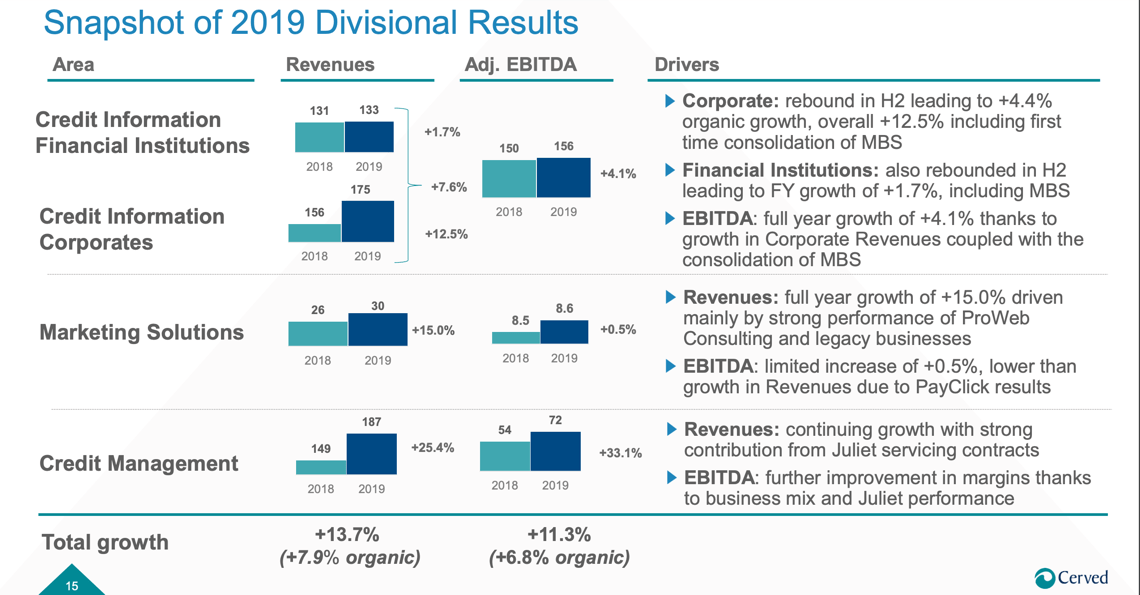 Cerved called off the talks for selling its credit management division to Intrum because of the turmoil related with the COVID-19 emergency (see here a previous post by BeBeez). Intrum previously said that in light of the present emergency, it aimed to prioritize a buyback of its own shares instead of m&a deals. Press rumours said that Intrum tabled a 450 million euros bid for Cerved Credit Management (CCM) which also attracted the interest of Credito Fondiario, Bain Capital and doValue. Previously CCM was said to have an enterprise value of 400 million (6.5X ebitda) and in 3Q19 posted sales of 128 million (Cerved’s total revenues are of 325.9 million) with an ebitda of 44.8 million and an adjusted ebitda of about 60 million (142.9 million). In 2019, CCM generated a turnover of 187.3 million (+25.4% yoy, Cerved’s total revenues are of 520.6) and an adjusted ebitda of 53.8 million (+ 33.3% yoy – 236.6 million) (see here a previous post by BeBeez). However, the credit information is still the core business for Cerved and generates a turnover of 308 million (+7.6%) with an adjusted ebitda of 156 million (+4.1%). Cerved’s ceo Andrea Mignanelli said that despite such good results, the company will not pay dividends in order to face the turmoil related to the COVID-19.

The COVID-19 could affect Italian companies with a below investment grade rating between B and BBB, or 65% of all Italian SMEs, said Modefinance, a fintech Rating-as-a-Service in which Corvallis invested (see here a previous post by BeBeez). Modefinance analysed 187k Italian SMEs with sales of 2 – 50 million euros with For-ST, a tool for stress testing. Modefinance depicted two outlooks for all sectors companies’ turnover in one year: a moderately negative one with a 4% shrink and a hardly negative one with an average downturn of 10%. Triple-A companies can face the negative context, but issues can arise for companies with a rating of BBB (18% of the sampled businesses), BB (23.86%), and B (22.45%). The impact of COVID-19 on the Italian economy will depend on the duration of the emergency and on the restraint measures that the Government will decide to implement. Modefinance based such forecasting on the assumption that the current emergency will end on 3 April and that sales will lower in one year. Valentino Pediroda and Mattia Ciprian founded Modefinance, a spin-off of Trieste University, in 2009. In 2015 Corvallis invested 1.3 million euros for 43% of the company. In July 2019, Modefinance and UK fintech Wiserfunding, a company that Edward Altman co-founded, launched the first certified fintech rating fintech for European SMEs. In December 2019, Modefinance signed a partnership with Alternative Capital Partners (Acp) an alternative asset manager with an ESG approach.

Officine Maccaferri and its parent holding Seci accepted the offer of Ad Hoc Group (AHG), the vehicle that groups under Carlyle’s leadership 54% of the investors in its 190 million euros bond with a 5.75% coupon and due to mature in 2021 (see here a previous post by BeBeez). As BeBeez previously reported, AHG will provide a bridge financing facility of 60 million while the company will issue a bond that can be callable after 12 months with a term of at least 18 months listed on Vienna market or other exchanges. After the restructuring, the company will issue a super senior bond of at least 60 million and a 4-years term. The proceeds of the bridge financing facilities will support the working capital of Officine Maccaferri and its foreign subsidiaries. The current bondholders will have 96% of Officine and Seci 4%. AHG may authorize the super senior bondholders to convert the debt in up to 83% of the company’s shares while current bondholders may keep 13%. Officine Maccaferri will soon appoint a Chief Restructuring Officer (CRO) for implementing a turnaround plan.

Moby, the Italian shipping company, defaulted after it didn’t pay last February the coupon on its 300 million euros Luxembourg-listed bond nor on its revolving credit line of 260 million and the grace period expired (see here a previous post by BeBeez).  On 29 February a standstill agreement expired while Moby could not find any agreement with bondholders and lenders on a debt restructuring. Bondholders are mainly hedge funds (Soundpoint Capital, Cheyenne Capital, and York Capital) grouped in an Ad Hoc Group that acquired on the secondary market more than 50% of the bond that recentely the Stock Market authorities suspended from trading. In 3Q19, Moby lost cash for 115.9 million (minus 108.1 million in 3Q18), while in 1H19 the loss has been of 83.1 million. At the end of September 2019, Moby’s cash amounted to 56.2 million (89 million at the end of June 2019 and 125.5 million at the end of September 2018). Furthermore, the company has also to pay 180 million euros to the Italian Government for the settlement due for the acquisition of 60% of Tirrenia-Cin, a shipping company with a value of 376.9 million. Moby paid 135 million at the transaction closing in July 2012 and 62 million in February 2016 but still has 180 million euros left.

On 19 March, Tuesday, Antonio Cattaneo, Giuseppe Farchione and Luca Gratteri, the extraordinary commissioners of troubled Italian furniture retailer Mercatone Uno asked the Court to sell six shops to two different buyers (see here a previous post by BeBeez). Mercatone Uno is in extraordinary administration since 2015 and has debts of 400 million and in April 2017 it sold its jewellery chain È oro to competitor Gruppo Stroili, a portfolio company of French fund Thom Europe. In 2015, Stefano Coen, Ermanno Sgaravato, and Vincenzo Tassinari, the previous three commissioners, chosen Shernon Holding for buying the assets of Mercatone Uno. However, in 2019 Shernon bankrupted as it could not pay its 90 million debt.

Axactor Italy, the Italian subsidiary of Oslo-listed Axactor, acquired a portfolio of unsecured Italian Npl worth 25 million euros from an undisclosed financial firm (see here a previous post by BeBeez). Axator will invest its credit lines and own resources for the transaction. Antonio Cataneo is the ceo of Axactor Italy. In 4Q19 the company generated a turnover of 8.3 million (+167% yoy). In June 2019 Axactor signed a strategic partnership with Npl Re Solutions (part of Gruppo Gabetti) for managing Npls and Utps.

Borsa del Credito, the fintech lender to SMEs that belongs to P101, Gruppo Azimut, and GC Holding, launched Cash Anti Covid-19, a financing facility for helping Italian mid-market companies to face the current turmoil (see here a previous post by BeBeez). The Working Capital Observatory of CRIBIS and Workinvoice (WCO) said that Italian SMEs may need 15 billion euros in the next three months and 45 billion for the entire 2020. The current turmoil may hit the sectors of wholesale, tourism, leisure, manufacturing, textile and fashion. October, the European corporate lender, said it will suspend for three months the principal repayments for more than 500 Italian SMEs that borrowers through its platform. Borsa del Credito is a bullet financing facility with a six months tenure for supporting the SMEs’ working capital for the next six months and it will provide 0.5 million to companies that have a turnover of above 10 million and up to 0.3 million to companies that generate sales below this threshold. Borrowers may payback their dues in 6 months through another financing facility with a tenure of at least 12 months, said Antonio Lafiosca, the coo who founded Borsa del Credito together with Alessandro Andreozzi and Ivan Pellegrini.

Canadian Solar Construction, part of Canadian Solar, received a 55 million euros revolving facility from Intesa Sanpaolo (see here a previous post by BeBeez). The company will invest such proceeds in the development and construction of 12 grid parity photovoltaic plants with a total power of 151MWp based in Southern Italian regions. In December 2018, Canadian Solar signed a 51%-49% joint venture with Manni Energy, part of Gruppo Manni, for investing in the development of market parity plants. Such jv subscribed three ten-years power purchase agreement (PPAs) with Trailstone, a global trader and investor in commodities.

Cogenest, a subsidiary of Iniziative Biometano, received a project financing facility from Banco Bpm (see here a previous post by BeBeez). The company will invest such proceeds for building a biomethane facility in Verona area. Iniziative Biometano belongs to Femo Gas and Stefano Svegliado is the ceo. In 2019 Iniziative Biometano company issued a 3 million minibond due to mature in 2025 with a 6% coupon. Banco Tre Venezie (anchor investor) and family offices subscribed the facility.