Home Data&Analysis BeBeez-Skillroom’s Invest in Italy Index shows a drop in the negative sentiment versus Italy, while the world takes proof that coronavirus is hitting everywhere
Data & AnalysisMarch 30, 2020Posted By: bebeez
Print Email

BeBeez-Skillroom’s Invest in Italy Index shows a drop in the negative sentiment versus Italy, while the world takes proof that coronavirus is hitting everywhere 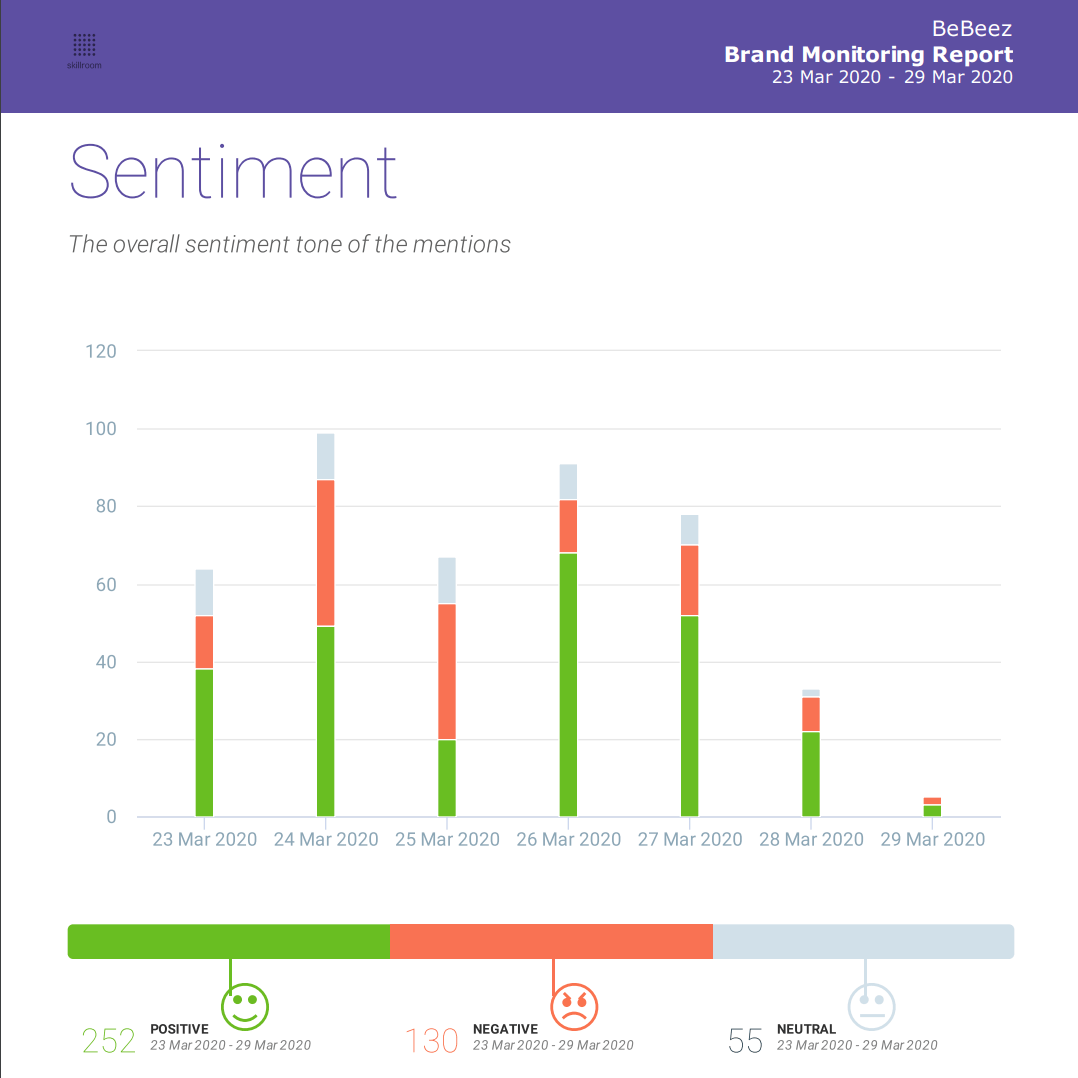 The Invest in Italy Index, the weekly index developed by Skillroom for BeBeez, with the use of artificial intelligence, to monitor the sentiment of international investors towards Italy in this moment of coronavirus pandemic, shows that in the 7 days between 23 and 29 March the topic “invest in Italy” on social media decreased a lot, probably due to the outbreak, during the week of a real covid19 crisis across Europe and the US (see here the Report) .

Mentions on the web increased slightly, but we are average compared to the entire period February/March 2020. In aggregate, mentions between web and social networks decreased to a total of 537 from 685 mentions of the week before.

Negative sentiment almost halved (130 mentions from 248 mentions the week before), but positive sentiment also fell by about 9% (252 mentions from previous 271), while neutral sentiment rose by almost 28% (55 mentions from 43). To indicate that while Italy is no longer the only Western country really affected by the pandemic, this is not enough to say that investing here is certainly considered a good idea. There are still too many doubts about the possibility of recovery (see also Beez Peak today).

The first analysis had gone back four weeks until February 17 to have a comparison parameter. In the period considered, mentions on the web and social networks regarding the keyword “invest in Italy” and related companies had been over 1500 and had 32.2 million readers. Of these mentions, about 66% were identified on the web and the rest on social media (see here a previous article by BeBeez). In the last week, the one from 16 to 22 March, the negative sentiment had increased by about 25% (248 mentions) while the positive one by about 36% (271 mentions), thus maintaining a stable condition with a slight advantage of news with positive sentiment, but this does not mean that the growth of the negative was very strong in the week from 16 to 22 March, particularly identified on 18 March, the day on which the BTP-Bund spread reached 330 basis points, a lot to push the ECB to announce the new 750 billion euro quantitative easing overnight (see here a previous article by BeBeez)

Skillroom is a startup born in 2017 from a research project of the University of Turin. The research project focuses on machine learning out of the big data and NLP (natural language processing) of minority and / or unwritten languages. The research project has entered its fifth year and is a PRIN (Project of Relevant National Interest) for MIUR. To date it has been funded with more than 700 thousand euros. The result of this research was patented (industrial patent) and the University of Turin has granted Skillroom exclusive use. The startup has developed several web marketing, analytics and sentiment analysis tools. For a test analysis, click here or click here for information.