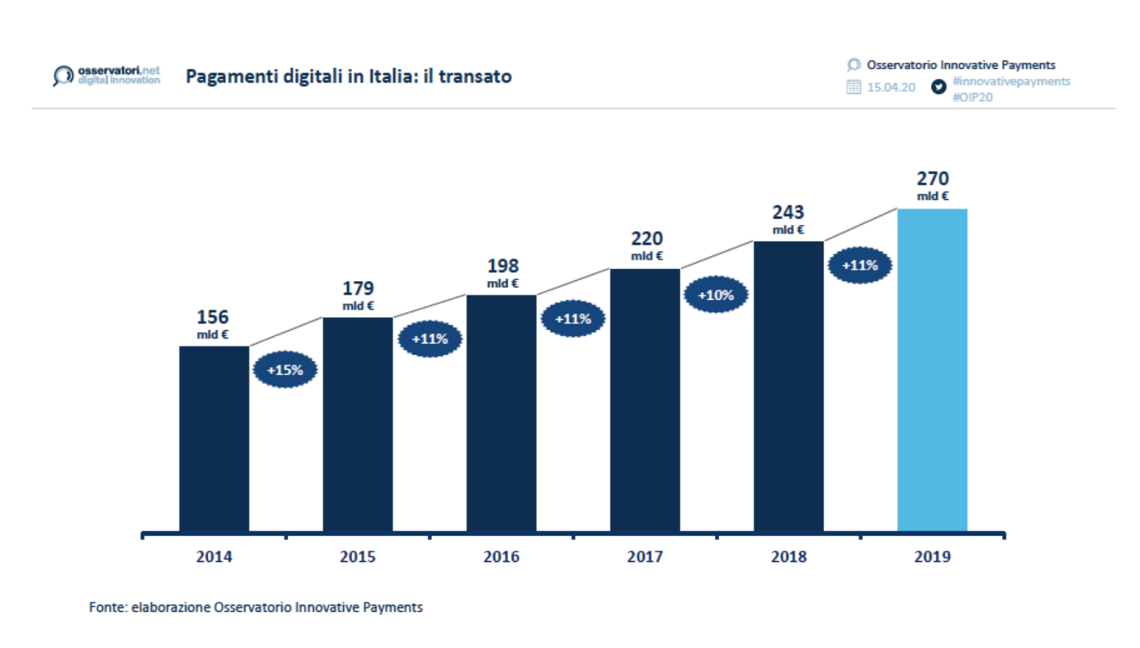 According to the 11th edition of the Report of Observatory for Innovative Payments of Milan Polytechnic University, in 2019, the amount of digital payments in Italy grew by 11% yoy to 270 billion euros (243 billion in 2018) (see here a previous post by BeBeez). Contactless payments rose from 40.5 billion to 63 billion (+56%) with an average ticket of 42 euros. Ivano Azaro, the director of the Observatory, said that banks are collaborating with BigTech firms like Google, which signed a partnership with Citi Group, or Uber that started a collaboration with JPMorgan. The normative frame, the birth of new digital payments companies and new technologies and tools are boosting the sector.

Hyris, a London provider of advanced diagnostics based on artificial intelligence, is looking for new shareholders (see here a previous post by BeBeez). Stefano Lo Priore (ceo) founded the company in 2014 with the support of Amedeo Clavarino, Marco Mocarelli, Giulio Maleci, and Carlo Montenovesi, the founder of Milan-based M&A boutique Cross Border. The Della Beffa Family invested in the company through Indena. On 8 April, Wednesday, Hyris lanched Bcube, a portable device for dna-screening that also supports test kits for analysing the environmental contamination of Covid-19.

SkinLabo, the Italian digital cosmetic brand, raised 1.7 million euros from LUISS Investment Club, LUISS Alumni 4 Growth, and Maire Investments, part of  Di Amato family office (see here a previous post by BeBeez). A group of entrepreneurs and venture capital investors founded SkinLabo in 2016. The company raised 4 million since its foundation. In September 2019, the company raised 1.15 million from several business angels and Club degli Investitori. In September 2018, Skinlabo received 0.5 million from Walter Ricciotti, the founder and ceo of Quadrivio Group, Stefano Gaetani and other business angels. SkinLabo received 0.2 and 0.4 million in 2018. The company expects to generate 6 million of sales in 2020 and will invest the recently raised proceeds in expanding in France and abroad as well as in its organic development. Angelo Muratore, ceo, founded the company together with coo Carlo Tafuri, the owner of Brandsdistribution.com.
Eterna Capital and Borderless Capital launched Eterna Borderless Venture Studio, an investment vehicle for supporting the projects that develop applications on Algorand platform, another partner of the project (see here a previous post by BeBeez). Silvio Micali, a professor of IT at MIT that previously received the Turing Award, founded Algogrand. In 2018, Andrea Bonaceto, the co-founder of HiredGrad, a recruiting tool that Imperial College Incubator supported, founded London-based Eterna Capital, which has resources of 20 million US Dollars. Nassim Olive, Asim Ahmad and Mattia Mrvosevic are the other co-founders of HiredGrad. Eterna Borderless Venture Studio will support the following projects:
• MAX Markets, a project for building an exchange of digital assets;
• Monerium, a platform for financial services and regulated electronic currencies;
• Orion Protocol, a liquidity aggregator and an exchange plugin for businesses and consumers;
• PlanetWatch, a global network of sensors for checking the air quality;
• SingularityNET, a network for providers of Artificial Intelligence-based services, whose ceo is Ben Goertzel;
• Stasis, a platform for tokens;
• Stonize, a platform for the digital securitizations.

Startup Geeks, the biggest Italian community of startuppers, launched the online incubator Startup Builder (See here a previous post by BeBeez). The mentors that are part of the incubators aim to support startups for 10 weeks and take the ideas to execution. Alessio Boceda and Giulia D’Amato are the founders of Startup Geeks that was born in January 2019.

Mirta, the e-commerce platform for artisans that operate in traditional sectors of the made in Italy, closed a 2.5 million euros capital increase for which attracted resources from Alberto Genovese, the founder of Facile.it and Prima Assicurazioni, and others (See here a previous post by BeBeez). Martina Capriotti and Ciro Di Lanno founded Mirta in 2019 and will invest the proceeds in expanding the business abroad and its organic development.

Domenico Arcuri, the commissioner in charge of handling the COVID-19 emergency in Italy, choosen the Immuni App of the software house Bending Spoons for tracking the movements of people for phase 2 of lockdown (see here a previous post by BeBeez). Centro Medico Santagostino, Milan’s digital marketing firm Jakala and its subsidiary GeoUniq, and John Elkann helped Bending Spoons for the app development. Luca Ferrari, Francesco Patarnello, Matteo Danieli, and Luca Querella founded Denmark-based Bending Spoons in 2013. In July 2019, StarTip acquired a 5.7% of the company together with H14 (the family office of Barbara, Eleonora and Luigi Berlusconi), Nuo Capital.

Soisy, an Italian fintech provider of P2P lending services, joined the open banking platform of Fabrick (See here a previous post by BeBeez). Banks and private investors will be able to invest in P2P credit flows through this partnership that Soisy and Fabrick signed. Paolo Zaccardi is the ceo of Fabrick. Pietro Cesati is the ceo and founded Soisy in April 2016 together with Andrea Sandro. In December 2017, the startup raised 0.891 million euros through a capital increase. In 2016, Soisy received the authorization from Banca d’Italia to act as a payment firm. Earlier this year, Soisy raised 2.8 million through an equity crowdfunding campaign on the platform Two Hundred. The company launched the campaign in November 2019 and overachieved its funding targets in 3 hours. Banca Sella has a controlling stake of Fabrick.

Fondo Sofinnova Telethon, a fund that French life science venture capital Sofinnova Partners manages, invested in Genespire, a developer of therapies for genetic diseases (see here a previous post by BeBeez). The fund also poured resources in Epsilen Bio, a developer of technologies for acting on the genes of diseases, and in PinCell, an Italian biotech that is in pre-clinic phase and is developing new therapies for rare diseases. Fondo Sofinnova Telethon, is the biggest fund that ITATech, a joint venture that Cassa Depositi e Prestiti signed with the European Investment Fund, supported with an investment of 40 million euros. Fondo Sofinnova was born in February 2018, in September 2018 announced its second closing and it currently has resources for 108 million, above the initial target of 100 million. Lucia Faccio and Paola Pozzi head Fondo Sofinnova Telethon. Sofinnova Partners has resources amounting to more than 2 billion. In 2015, Sofinnova Partners founded BiovelocITA, the first Italian accelerator for biotech businesses, together with Silvano Spinelli and Gabriella Camboni.

The readers of BeBeez News Premium have access to the BeBeez Reports and Insight Views. The monthly subscription fee is 20 euros per month plus VAT (or 240 euros per year plus VAT). The subscription to BeBeez Private Data Combo grants access to BeBeez Private Data, a database that includes the financials of more than 1700 Italian companies that belong to private equity, venture capital and private debt investors, and allows to access BeBeez News Premium for a monthly fee of 110 euros plus VAT (or 1320 euros plus VAT per year). Students can subscribe to BeBeez News Premium for 15 euros (VAT included) for the first month and renew the subscription monthly. Please click here or write to [email protected] for further information about the subscription procedure.
Tags: A11 VentureEterna Capitalfintech @enHyrisImmuniItalia StartupMilan Polytechnic UniversityMirtaSkinLaboSoisyStartup Geeks
Share 0
Tweet
Share 0
Share
Share