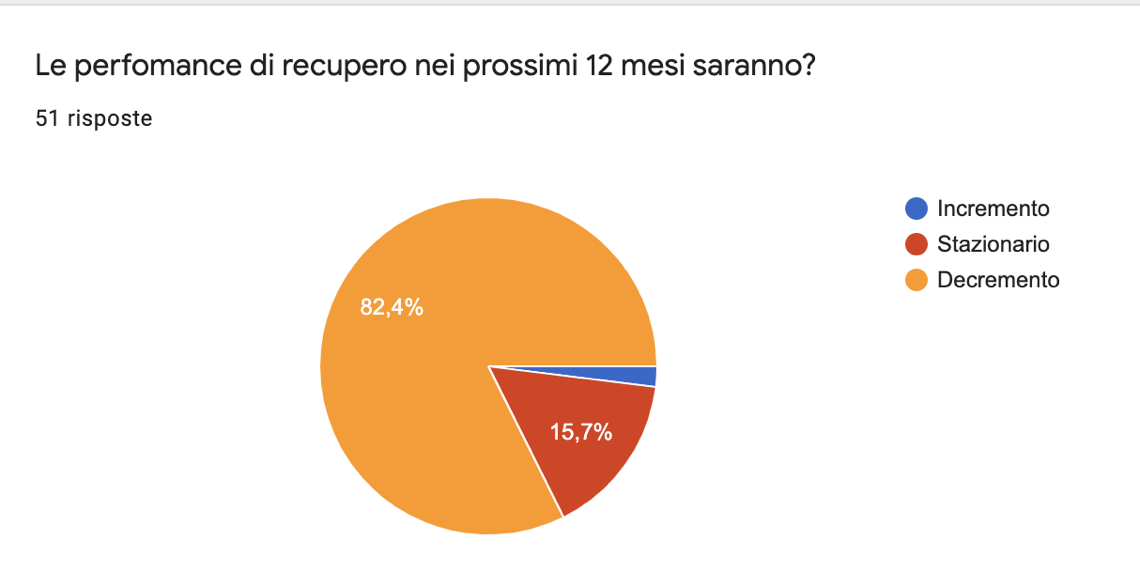 In Italy only 1.8 billion euros GBV of t ransactions on impaired loans have been announced year-to-date, after a 2019 in which deals for over 52 billion euros were announced (a figure revised upwards from the preliminary data of 50 billion euros in BeBeez‘s NPL Report published in January, which did not take into account the securitization operation carried out on the secondary by Belvedere Spv on 8 NPL portfolios for a gross total of 2.5 billion euros) and other 35 billion euros are coming on the market. Let’s say on paper, because what will happen once we get out of the Covid-19 emergency is not at all clear. All figures and tables are available in the new BeBeez NPLs Report, part of the BeBeez News Premium subscription (see here how to subscribe).

The COVID-19 related lockdown will have a relevant impact on the distressed credits market, according to 64.7% of sector professionals, while 27.5% of them think that the consequences will be devastating as banks won’t be able to transfer quickly the liquidity to families and individuals (see here a previous post by BeBeez). Credit Village and T.W.I.N.surveyed participants to the distressed credits market ahead of the Credit Village Digital Week digital conference for which BeBeez is the media partner and that will take place between 27 and 30 April, Monday and Thursday. Stefania Peveraro, BeBeez Editor in chief, will moderate some of the panels of the event. BeBeez readers will get a 10% discount for the event ticket (write to [email protected] for information and mention the promotional code IDW2020). The participants to the Digital Week will be able to subscribe to BeBeez News Premium and get access to exclusive reports and insights for a fee of 199 euros (plus VAT per year. Write to [email protected] for further information. Further information available here.

A report of Debtwire about the Italian NPL market said that in 1Q19, market participants closed 10 deals worth a total of 1.5-1.6 billion euros (5 billion for 7 deals in 1Q19), 620 million of these involve secondary market transactions (see here a previous post by BeBeez). However, BeBeez data say that Italian market participants closed 19 transactions (4 of them for an undisclosed value) worth a total of 1.8 billion, while firms could close deals for 35 billion in 2020. The details of the operations are available in the Report NPL BeBeez that includes all the deals in the period January – April 2020 and a review of the data of 2019.

AMCO, the Italian investor in distressed credit, has cash available for 318 million euros, a CET1 ratio of 63.7% and a Debt/Equity ratio of 0.5x after the closing of a 1 billion euros capital increase in December 2019 (See here a previous post by BeBeez). The shareholders appointed for the next three years Marina Natale as the company’s ceo and coo, Stefano Cappiello as chairman and Domenico Iannotta as director. Amco will invest the proceeds of the capital increase in its organic development.

FBS and FBS Real Estate rebranded as Ifis Npl Servicing and Ifis Real Estate (See here a previous post by BeBeez). Both the companies belong to Banca Ifis that is carrying on an internal reorganization of the NPL business for separating the activity of credits acquisition from the recovery. By the end of 2020, Ifis NPL Investing and Ifis NPL Servicing will handle Banca Ifis’ NPLs activity, said Francesco De Marco, the coo of Ifis NPL Servicing.

On 22 April, Wednesday, 78.15% of the creditors of CMC (Cooperativa Muratori e Cementisti), the troubled Italian co-operative construction company, accepted the restructuring proposal of the borrower (see here a previous post by BeBeez). Ravenna’s Court set for 20 May, Wednesday, a hearing for homologating the company’s receivership plan. In March 2020, the investors in the two company’s bond of 325 and 250 million euros accepted the company’s proposal. CMC issued a Luxembourg-listed bond of 325 million (6% coupon and due to mature on 15 February 2023) and another of 251 million (6.875% coupon and maturity on 1 August 2022) that Credit Agricole, Algebris, Muzinich, Ubs, Mediolanum, Vontobel, Julius Baer, Alliance Bernstein, and others subscribed. Unicredit and Bnl Bnp Paribas provided a 160 – 165 million revolving credit facility, while bank debt amounts to 100-150 million. The total debt of CMC is worth about 900 million. Davide Mereghetti, the former Unicredit’s Global Head of Family Office and head of Italian Investment Banking, is the ceo of CMC since December 2019.

Mauro Girardi, the chairman of Milan-listed Borgosesia, an Italian investor in special situations, said to BeBeez that the firm aims to invest about 8 million euros in 2020 for acquiring non-performing credits that have real estate assets as underlying (see here a previous post by BeBeez). The company aims to invest in the underlying real estate assets and realize the. Borgosesia acquired 95% of Lake Holding, of which it already had 5%. Borgosesia targets residential assets based in touristic areas and main cities in the centre and the North of Italy. However, Borgoseisa said it will expect a slowdown of its business in light of the COVID-19 emergency (see here a previous post by BeBeez). The company is already looking for additional resources to for new investments. Borgosesia’s equity is of 26.9 million euros, net profits of 2.7 million (+69% yoy), a turnover of 14.5 million, an adjusted ebitda in the region of 5 million (+17.6%), and net financial debt of 3.9 million (8 million). Borgosesia’s controlling shareholder is Milan-listed CdR Advance Capital which carried on a spin-off in December 2019. Borgosesia also aims to launch BGS Club Spac, an Italian multi-spac for alternative investments in special situations.

Cherry 106, the Npl investor of which Giovanni Bossi has a controlling stake, launched law firm Cherry Legal together with Renata Castellan and Irene Pirelli Marti (see here a previous post by BeBeez). Cherry Legal, based in Milan and Padua, will provide legal assistance for the non-performing credits sector. Bossi previously launched Cherry, a developer of artificial intelligence algorithms for the appraisal of investments in distressed credits and in November 2019 he acquired 65% of Cassiopea NPL and rebranded it as Cherry 106.

On 16 April, Thursday, Milan Court homologated the receivership of Igv Group, an Italian producer of lifts and elevating platforms (see here a previous post by BeBeez). More than 85% of the company’s creditors accepted the restructuring proposal of Igv Group that Giuseppe Volpe founded in 1966. IGV has sales of 35.1 million euros, an ebitda of minus 3.9 million, net losses of 19 million, and net financial debt of 24.8 million.

FSI Investimenti, of which Cdp Equity is a controlling shareholder, and Polaris Capital Management will subscribe with 77.7 million euros the 130 million capital increase that troubled Milan-listed engineering firm Trevifin will launch between 4 and 18 May 2020 (See here a previous post by BeBeez). Lenders committed to compensating their 284.1 million credits with Trevifin with a 4.5:1 swap rate for a total of 63 million. The company will issue shares for 19 million in support of 1.6 billion of warrants that investors will be able to trade on Milan market since 4 May, Monday, and exercise by 5 May 2025. The capital increase will amount then to 213 million.

Milan Court accepted the receivership application of Italian fashion brand Byblos (See here a previous post by BeBeez). Studio Spada is looking for a buyer for the asset. In November 2019, Byblos applied for receivership with a plan drafted in October 2019. Manuel Facchini, the ceo and the creative director of the company, said that such a situation is a consequence of the choices of previous managers and Italian prosecutors are investigating them. In April 2018, Byblos posted an ebitda of minus 1.5 million euros.

The lockdown related to the COVID-19 emergency pushed down by 14.7% the application for appraisal and reassessment of credits of Italian companies for 1Q20, says Crif, the Italian provider of integrated information for business and credit, with its Barometro (see here a previous post by BeBeez). Lombardy’s applications decreased by 18.9%, Piedmont’s by 18.5%, Veneto’s by 16.4%, and Emilia Romagna’s by 14,2%. On another end, Crif issued a 30 million bond that Pricoa Private Capital (part of Prudential Financial) issued in a private placement (See here a previous post by BeBeez). This issuance is part of a shelf facility programme worth 125 million Dollars (or 115.3 million euros) that the company launched in 2016. The current bond has only one tranche and an amortizing plan of 12 years with an undisclosed fixed rate. In July 2016, Pricoa subscribed in private placement a 50 million euros bond that Crif issued as part of the shelf facility that renewed for a further three years for 125 million Dollars (or 115.3 million euros). Carlo Gherardi, the ceo of Crif, said that the company will invest the raised proceeds in its international expansion. Crif has sales in the region of 560 million euros and net financial debt of 146.3 million. Pricoa Capital is one of the investors that BeBeez Private Data monitors. Find out here how to subscribe to the Combo Version that includes the reports and the insight views of BeBeez News Premium 12 months for 110 euros per month.

Azimut signed an agreement for issuing up to 100 million euros of credit to SMEs through the fintech lending platform BorsadelCredito.it (Bdc) (See here a previous post by BeBeez). P101, Azimut and GC Holding, the controlling shareholder of logistic company Italmondo, are shareholders of Bdc which will issue credit facilities for which Fondo di Garanzia del Mediocredito Centrale will provide a 90% warranty. Ivan Pellegrini is the ceo of Bdc, while Pietro Giuliani is the chairman of Gruppo Azimut. Sign up here for BeBeez Newsletter about Private Debt and receive all the last 24 hours updates for the sector.

Italian dairy company Galatea, part of Gelinova, aims to issue a 0.5 million euros Milan-listed minibond (See here a previous post by BeBeez). The company will invest such proceeds in the development of its subsidiary Golosa. Gelinova belongs to the founding family Pillot. Stefano Pillot, the founder’s son, is the company’s coo. Gelinova has sales of 4.55 million and an ebitda of 0.222 million.

Italian food producer Pastificio Di Martino Gaetano & F.lli borrowed 10 million euros from Unicredit (See here a previous post by BeBeez). This is the first operation of the programme Garanzia Italia of Sace, the Italian foreign trade insurer. The Di Martino Family founded the Naples-based company in 1912. Third-generation owners Giuseppe and Giovanna Di Martino head the business which has sales of 71.5 million euros, an ebitda in the region of 3 million, net losses of 1.9 million, and net financial debt of 30.5 million. Pastificio dei Campi, the controlling shareholder of Di Martino, has sales of 118 million, an ebitda of 7 million, and a net financial debt of 34.9 million. The group is the owner of Pasta Antonio Amato since 2012 and in 2017 it acquired 66.67% of Grandi Pastai Italiani through the subscription of a 7 million capital increase.

Italian provider of credit facilities to SMEs October Italia is going to launch a direct lending fund (see here a previous post by BeBeez). The fund reached a first closing for 30 million euros with the support of associates of Federconfidi and Rete Fidi Italia and of the European Investment Fund through InnovFin, the warranty fund of the European Commission and Horizon 2020. The previous fund of the platform October will authomatically pour 51% of the loan facilities, while private investors and funds supply the remaining 49%. After the launch of Fondo October Italia, every company that will receive facilities from such fund will release on the platform two different projects. One for private lenders and Fondo October and the other only for Fondo October Italia that will always invest 100% of the reserved amount. On 28 April Tuesday, October announced that it will offer to its clients the possibility to refinancing their current liabilities with several guarantees and get new facilities amounting to more than the current residual capital and with longer tenure (see here a previous post by BeBeez). Italian SMEs can benefit from the guarantee if the institutional investors of the October Fund exclusively underwrite the new financing, while the private lenders will get the total repayment of the remaining dues, which they can transfer to their current account or reinvest in new projects. Sergio Zocchi is the ceo of October Italia, which reportedly launched a 250 – 300 million Eltif.