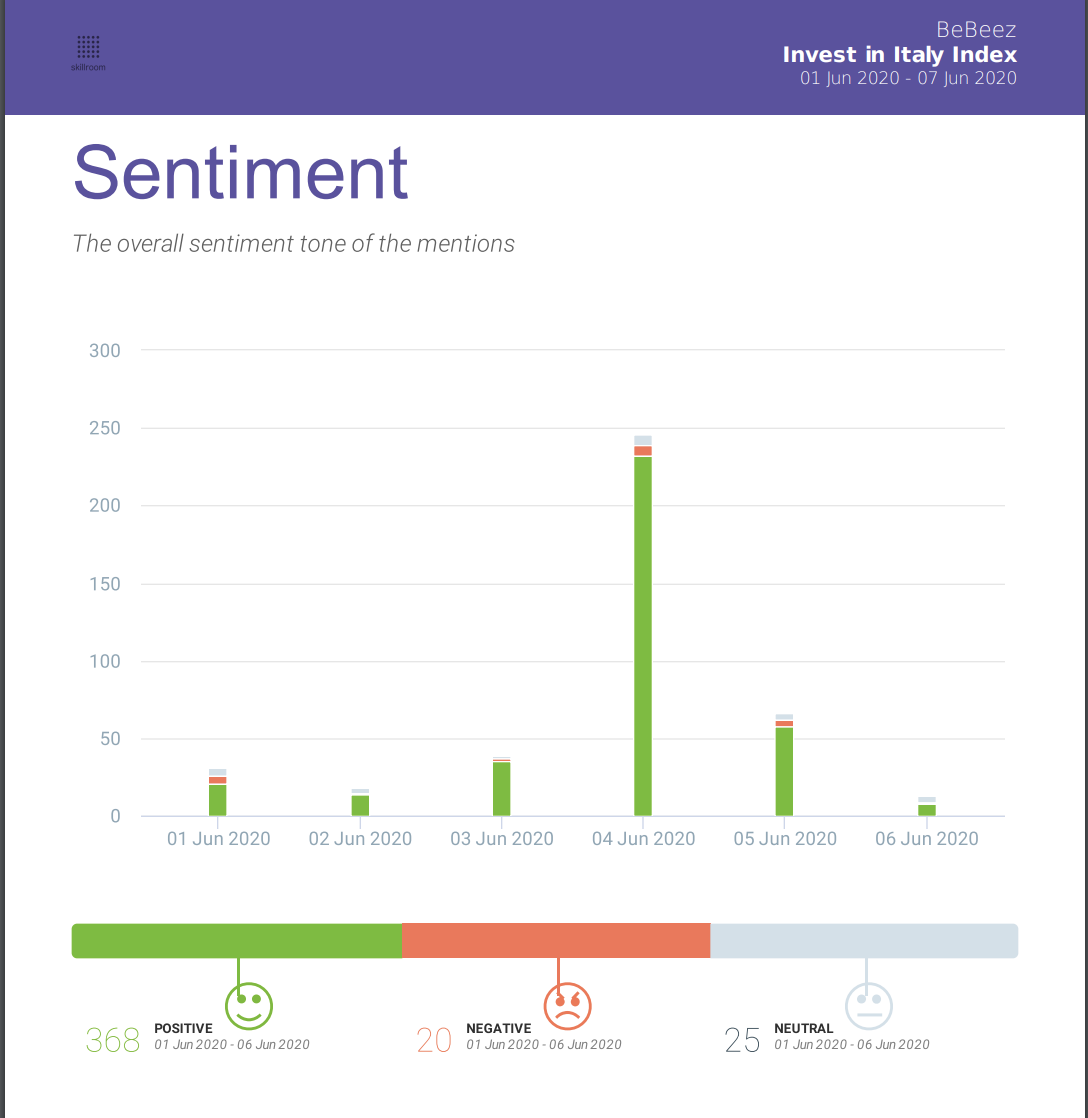 The artificial intelligence-based weekly Invest in Italy Index of Skillroom and BeBeez tracked on the web an increasingly positive sentiment of international investors for Italy in the week beginning on 1 June, Monday (see here a previous post by BeBeez). The “invest in italy” topics on the web and on the social networks reached 590 positive mentions, 68%, 105 or 12% have been negative, while the remaining are neutral. The decision of the ECB to invest a further 600 billion euros (for a total of 1.35 billion) in the Pandemic emergency purchase programme (PEPP) supported the positive sentiment.

Teamsystem, a publisher of softoware for business that belongs to Hellman&Friedman (HF), acquired from Gellify 5% of Habble, a provider of costs optimization services, and signed an option for acquiring 60% by Februeary 2021 (see here a previous post by BeBeez). Gellify invested in Habble in June 2018. Antonio De Luca founded the target in 2012, completed an acceleration process with Belgium’s EIT ICT Labs in 2015 and raised one million euros in 2016 from Gellify and a group of business angels. Habble has sales of 1.79 million euros and an ebitda of 80,000 euros.

German sennder, a provider of digital services for transports in which Poste Italiane invested with H14 (the family office of Barbara, Eleonora, and Luigi Berlusconi), acquired French competitor Everoad (see here a previous post by BeBeez). The merged entity will rebrand as Everoad by sennder. Since 2015 , sennder  raised more than 100 million US Dollars from international investors.

Barberino’s Classic Italian Barber launched an equity crowdfunding campaign due to end on 31 July 2020 on Mamacrowd (See here a previous post by BeBeez). The company set a target of 0.5 – 1 million euros on the ground of a pre-money valuation of 5.2 million. Barberino’s already raised 0.318 million. Michele Callegari and Niccolò Bencini founded Barberino’s in 2015. Earlier in May, Net4Capital acquired from the founders a minority of the business that in May 2018 riased a seed round of 0.5 million. Barberino has sales of 1.34 million and an ebitda of 62,000 euros.

Hyris, a London’s Artificial Intelligence -based startup for advanced diagnostics, raised a series A round from lead investor Astanor Ventures, NEOS Medica, Idb Holding, and Pi Campus (see here a previous post by BeBeez). Sources said to BeBeez that the round amounts to 2.5 million euros. Stefano Lo Priore (ceo), Amedeo Clavarino, Marco Mocarelli, and Giulio Maleci founded Hyris in 2014 with the support of Carlo Montenovesi. The company will invest such proceeds in its organic development.

LVenture Group, a Milan listed financial investor, signed a biennial investment partnership with Lazio Innova (see here a previous post by BeBeez). Innova Venture, a subsidiary of Lazio Innova, could co-invest in startups that will join the acceleration programme of LVenture Group. Fabio Mondini de Focatiis, Stefano Peroncini and Peter Mayrl, the members of Innova Venture’s investment committee, will carry on the appraisal of the companies together with LVenture. Each startup will get up to 0.2 million euros (60% from LVenture and 40% from Innova). The funds may pour up to 2.5 million in each accelerated startup in subsequent stages.

Italian startup FrescoFrigo, a vending machines business, raised 0.5 million euros in one month through an equity crowdfunding campaign on CrowdFundMe (see here a previous post by BeBeez). The company set a fundraising target of 0.15 – 0.5 million and went in overfunding in less than one week as it raised almost 0.17 million on the ground of a pre-money value of 3.5 million. FrescoFrigo will invest such proceeds in boosting its working capital and its organic development. FrescoFrigo raised in the region of 2.5 million in equity and debt through 4 rounds that attracted the resources of Giorgio Ponticelli, Embed Capital, Wonder, Pariter Partners, Metrica Ventures, Pyramid, Andrea Dusi, Mega Holding, Futuro Investimenti, Epta, Digital Magics, and Club degli Investitori. Tommaso Magnani (ceo) and Enrico Pandian (chairman) founded the company in 2018.

ACBC, an Italian startup operating in the shoe industry, received the 2020 award of B Heroes (see here a previous post by BeBeez). The fund will pour 300k euros in the company. RiceHouse will receive 150k euros. Wid Academy will get 100k, Brain Control will get 50k. Boolean Careers received the awaRDS from RDS 100% Grandi Successi, the radio partner of the event. All the 16 startups that joined the B Heroes contest will be part of ELITE, the private market of integrated services of the London Stock Exchange. ELITE Intesa Sanpaolo Lounge will make available to the companies a network of multi-stakeholders.

Net Insurance will implement the payment & collection engine of Fabrick, the open banking system of Banca Sella, (See here a previous post by BeBeez). Net Insurance is the first insurer that is using an account aggregation solution for optimising its relation with its banking partner. Net Insurance listed on Milan market at the end of 2018 after having carried on a business combination with Spac Archimede. Banca Sella owns 80% of Fabrick.

Milan-listed paytech Nexi and strategic consultancy firm Bain & Company signed a strategic partnership for the open banking sector (see here a previous post by BeBeez). Bain&Co joined Nexi’s ecosystem for the open banking. Nexi is one of the companies that BeBeez Private Data monitors. Find out here about the post-lockdown offer: from 1 June to 31 December 2020 for only 550 euros!

Bruno, a Sicilian retailer of consumer electronics that is part of the network Euronics Italia, will adopt the dynamic discounting system of fintch startup Findynamic through the partnership with Unicredit (see here a previous post by BeBeez). Enrico Viganò founded FinDynamic in 2016. Unicredit acquired 10% of the company in June 2019. Bruno, a company born in 1936, belongs to the Andronico Family and has sales of 300 million euros.

Genuine Way launched a blockchain-based certification for authenticating made in Italy products (see here a previous post by BeBeez). Genuine Way, based in Lugano, was born in 2019 and is active in Italy since early 2020. The company attracted an investment round of 0.3 million euros and a grant of 50,000 US Dollars from EOS VC, an investor in blockchain projects. Walfredo della Gherardesca heads Genuine Way.