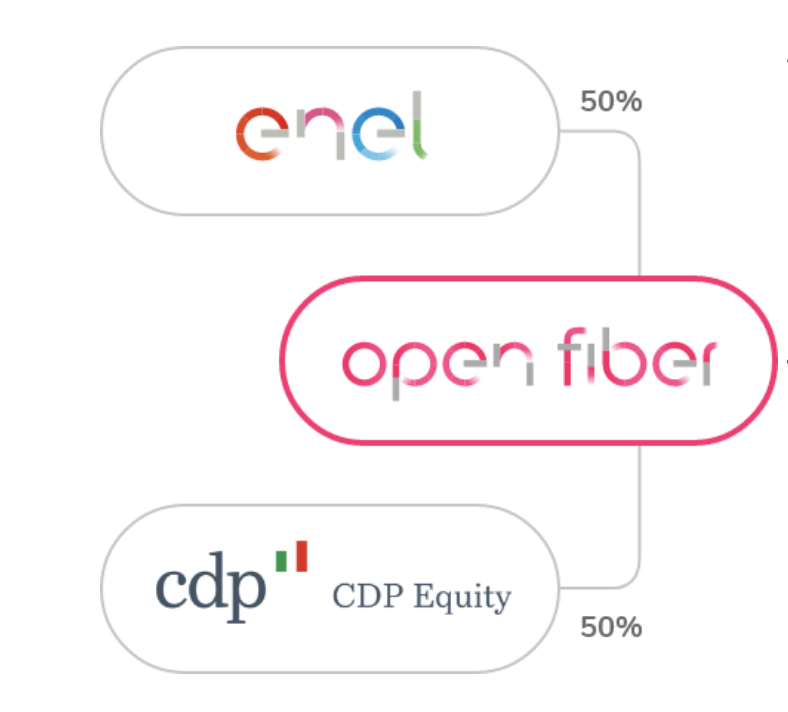 Enel said that its 50% stake in Open Fiber attracted a non-binding offer of Macquarie Infrastructure Real Asset (see here a previous post by BeBeez). OpenFiber’s even owners are Enel and Cdp Equity. Previous press report said that international infrastructure funds are also interested in Flash Fiber (a joint venture of Telecom, 80%, and Fastweb, 20%) for the FTTH assets of Tim. Open Fiber’s enterprise value is of 8 billion, according to a report of Mediobanca. However, according to Tim the asset is worth 5-6 billion. Open Fiber has sales of 186 million. Macquarie is reportedly interested in Autostrade per l’Italia and in ENI’s Australian activities for natural gas.

Macquarie Infrastructures aims to buy Eni’s natural gas assets in Australia (See here a previous post by BeBeez). However, the assets also attracted the interest of Austrialia’s Santos and South Korean SK Group which hired JPMorgan as advisor. Citi is assisting Eni for fetching one billion Australian Dollars from the sale of Blacktip Gas Project, Yelcherr Gas Plant, 10.99% of Darwin LNG and of Bayu-Undan, and a 72.2% of Evans Shoal.  These assets have a free cash flow of 165 million Dollars.

Alessandro Santoliquido, the ceo Italian insurer Amissima, said that Apollo Global Management started again the auction for the company for which Equita and Kpmg are advising (see here a previous post by BeBeez). Apollo acquired Amissima in 2014 for 310 million euros after having acquired Carige Assicurazioni and Carige Vita Nuova in the same year. In March 2016, Amissima launched a capital increase of 52 million.

Glennmont Partners is going to sell its wind energy assets with a power of 245 MW that acquired in 2016 from Spanish Iberdrola (see here a previous post by BeBeez).  The value of the portfolio is in the region of 500 million euros. Glennmont is choosing its financial advisor. In June 2019, Glennmont Partners announced the final closing at 850 million, above the set target of 600 million, for a fund that will invest in renewable energy.

Telepass expects to receive binding offers for a minority of the business by 30 June, Tuesday (see here a previous post by BeBeez). The company reportedly attracted the interest of Warburg Pincus – Neuberger Berman, Bain Capital – Advent International,  Apax, and Partners Group. In June 2019, Atlantia started the sale of a 30% of Telepass and further to the mentioned funds, the asset attracted the offers of Adia, GIC, QIA,Canadian Pension Funds, General Atlantic, KKR, and TPG on the ground of an enterprise value of 2 billion euros. Atlantia is currently rumoured to sell a 49% of the business that acquired in 2016 from Telepass da Autostrade per l’Italia (96.15%) and Autostrade Tech (3.85%) on the ground of an enterprise value of 1.148 billion.

FSI joined the talks between CVC and Lega Calcio di Serie A (see here a previous post by BeBeez). Lega Calcio reportedly attracted the interest of Bain Capital as well. CVC could invest 2.2 billion euros for a 20% of a newco that will retain the TV rights of Serie A for ten years from 2021. The fund will hold exclusive talks until the end of June 2020. Lega will hire soon a financial advisor. Bain Capital is ready to pay 3 billion for a 25% stake. Previous press reports said that Blackstone was ready to provide Lega Calcio with a bridge loan of 100 million and that Silverlake, which ownd 10% of Manchester United, was interested in the asset. However, sources said to BeBeez that CVC is also interest in other European Leagues.

Impresoft, an IT pole that Xenon Private Equity created in November 2019 out of the merger of 4ward, Brainware, Gruppo Formula, Impresoft and Qualitas Informatica, acquired Progel (see here a previous post by BeBeez). Progel has sales of 9.83 million euros, an ebitda of 2.22 million and net cash of 2.26 million. Impresoft’s turnover now amounts to 65 million euros. Alberto Trigari is the ceo of Progel while Rossano Ziveri is the ceo of Impresoft Group.

Tikehau Capital won the auction for a minority of EuroGroup, an Italian producer of industrial machinery (see here a previous post by BeBeez). The asset attracted the interest of Ambienta, TowerBrook and Space Holding. Banca Imi and Unicredit are handling the sale. EuroGroup belongs to the Iori Family and has sales of 410 million euros, an ebitda in the region 31.5 million, with a net financial debt of 101.8 million.

In 2H19, Friulia invested more than 18 million euros in 12 companies and allocated a further 29 million for the next 11 transactions (see here a previous post by BeBeez). Friulia posted a net profit of 0.156 million and poured 173 million in companies of the Friuli Region that generated an aggregate turnover of 2 billion. Friulia invested in equity, quasi-equity and minibonds (7.5 million). Barbara Zilli, Friuli’s councillor for finance, said that the region allocated resources for 50 million for supporting the post-coronavirus recovery

Oaktree Capital Management acquired 82% of Castello sgr, an independent real estate asset manager (see here a previous post by BeBeez). Giampiero Schiavo is the ceo of Castello whose shareholders Isa-Istituto atesino di sviluppo (79%), Itas holding (14.3%), Lo.ga-fin (3.63%), and the managers (2.95%) hired Mediobanca for launching a capital increase of 15 million euros and changing the ownership structure.  After such a sale to Oaktree, Isa has 15% of Castello, and Schiavo 3%. The company attracted also the interest of Aerium and LBO France. Castello has AUM for 2.3 billion and more than 350 assets in Italy.

Cooperativa Esercenti Farmacia and private equity Vgo Capital Partners signed a partnership for acquiring drugstores in Italy (see here a previous post by BeBeez). CEF, is a co-operative group of pharmacies that has sales of 1.44 billion euros, an adjusted ebitda of 24.1 million and a net financial debt of 306 million. Vgo Capital Partners is a multi-sector private equity based in London.

Hedge Invest and Algebris Investments launched HI Algebris Italia Eltif, which received the authorization of Banca d’Italia in February 2020 (see here a previous post by BeBeez). The new fund will invest Italian SMEs in ipo or pre-ipo. The sale of the product will start on 20 July 2020, coinciding with the tax incentives approval for retail investments in alternative assets. HI Algebris Italia Eltif will be available on the platform Allfunds Bank. The Eltif will raise 200 million euros in four closings in late July 2020, September 2020, December 2020, and early 2021. Luca Mori and Simone Ragazzi will manage the product that will target pre-ipos and ipos of private and listed (with a market capitalization of less than 500 million) Italian SMEs and an investment horizon of 5 years.

Gradiente acquired a controlling stake in Argos and Aalberts Surface Treatment Italy and signed a binding agreement for buying Impreglon Italia for creating Argos Surface Technologies (See here a previous post by BeBeez). Banco Bpm financed the transaction. Impreglon Italia has sales of 3.5 million euros and an ebitda of 0.438 million. Argos has a turnover of 8 million with an ebitda of 1.3 million and a net financial debt of 1.1 million.

A club deal of private investors organized by Astraco srl acquired the majority of Crippa, the Italian company for industrial authomation (see here a previous post by BeBeez). Antonio Crippa, the target’s ceo will reinvest in the company through equity and a vendor loan. Equita Group and Banca Sella issued hybrid instruments for supporting the deal, while the founder Aurelio Crippa will keep his onorary chairman role.

Parajumpers, an emerging brand for jackets, attracted the interest of private equity firms (see here a previous post by BeBeez). Before the lockdown, the company’s enterprise value was of 120 million euros. Parajumpers belongs to brothers Ermanno and Giuliano Paulon, who founded the company in 2006 with Massimo Rossetti, and is choosing a financial advisor. The company has sales of 60.5 million, an ebitda of 11.9 million, and net cash of 4.9 million.

Igi is in exclusive talks for acquiring Buona Compagnia Gourmet (BCG), an Italian food company (see here a previous post by BeBeez). BCG has sales of 32 million euros and was born out of the merger of Pamfood with Essedue Alimentare, that Assietta Private Equity acquired in 2012. In 2015, Gradiente purchased the asset and in 2017 sold its 21.5% to Siparex.

Cantiere del Pardo’s shareholders Luigi Servidati and Fabio Planamente hired Mediobanca for sellin up to 60% of the business (see here a previous post by BeBeez). Cantiere del Pardo has sales of 50 million euros with an ebitda of 7 million. The company recently acquired the competitor VanDutch that could increase the company’s revenues by 20-30 million.

Borgosesia, a Milan-listed real estate developer, launched BGS Club Spac (see here a previous post by BeBeez). BGS will invest in special situation for the real estate sector without a listing, but through the membership of a club of investors (HNWI) that can choose each time whether to join a deal.

After having faild the business combination with ABK between December 2018 and early 2019, Capital For Progress Single Investment (CPSI – fka Spac Capital for Progress 2)  said it could not release its 2019 results as its subsidiary Copernico Holding, a co-working company, could not disclose its 2019 financial due to the coronavirus turmoil (See here a previous post by BeBeez). Copernico Holding will hold an EGM on 23 June, Tuesday, while CPSI’s shares are suspended from trading after the company called off the shareholder meeting previously scheduled for 24 July, Friday. Massimo Capuano, Antonio Perricone, Marco Fumagalli, Alessandra Bianchi, and Bruno Gattai launched CPSI in August 2017 after having raised 65 million euros. Pietro Martani and Leonardo Ferragamo founded Copernico in 2015 and own 51.5% of the company. In 1H19, Copernico posted sales of 12.15 million (9.44 million yoy), with an ebitda of 0.395 million (-1 million). In 2018, Copernico posted revenues of 20.8 million, an ebitda of minus 2 million and a net financial debt of 6.38 million.

Golden Goose appointed Maureen Chiquet as non executive chairman for replacing Patrizio di Marco who will keep his co-investor role (see here a previous post by BeBeez). Maureen Chiquet previously worked as global ceo of Chanel from 2003 to 2016. Permira acquired a controlling stake in Golden Goose in 2019 for an enterprise value of 1.28 billion euros. Carlyle and the management reinvested for a minority. The company has sales of 260 million and an ebitda of 55 million, while in April 2019 it paid a dividend of 100 million to Carlyle.

Dedalus, an IT company for the healthcare sector that belongs to Ardian, appointed Andrea Fiumicelli as ceo (see here a previous post by BeBeez). Fiumicelli founded DXC Technology (a company born out of the merger of Computer Science Corporation with Hewlett Packard Enterprise Services) and headed its Health Care and Life Science. Dedalus has sales of 470 million euros and Ardian holds 75% of the company of which acquired a 60% stake in 2016.

In light of the coronavirus turmoil, Italian companies could shrink by one third their turnover and halve their ebitda or post a negative figure, said the speakers of “Ripartire più forti. La nuova sfida delle aziende italiane”, an event of Quadrivio Group and Giovani Imprenditori di Confindustria (see here a previous post by BeBeez). Valerio De Molli, the ceo and managing partner of The European House of Ambrosetti and senior advisor of Quadrivio Group, shared the results of the analysis of 112,000 companies generating an aggregate turnover of 2.9 billion euros and an ebitda of 295 million, 94.3% of the surveyed companies generated a positive ebitda the year before. Innocenzo Cipolletta, the chairman of AIFI, said that after the coronavirus emergency, private capital investors may support companies in their recovery strategy.

BeBeez welcomes you after the lockdown period with an unmissable offer:
subscription to BeBeez News Premium and BeBeez Private Data
for only 550 euros plus VAT from 1 June to 31 December 2020
(from 770 euro original price)
Click here for more info