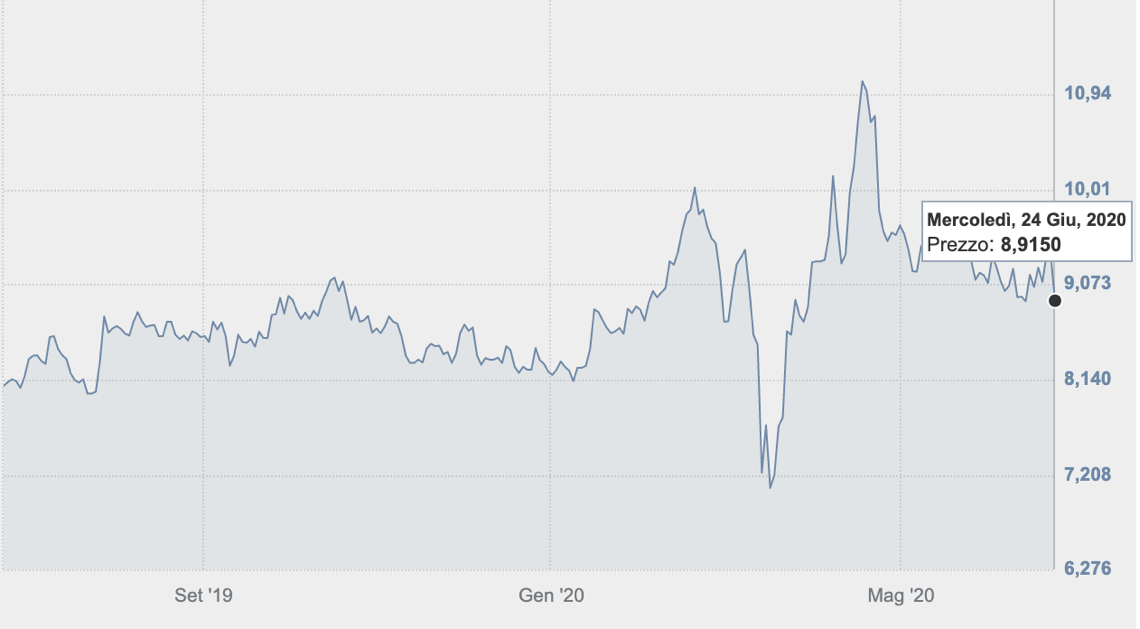 Tim will sell a 14.8% stake of Inwit to the consortium of investors led by Ardian Infrastructure and Canson Capital Partners which last May had entered in exclusive talks for acquiring a minority stake of the company that owns Tim’s mobile phone towers, which at the end of March merged with Vodafone Towers srl, the company that owns the Vodafone mobile phone towers (see here a previous article by BeBeez).

The announcement was made last evening, specifying that the transaction is based on a value of the Inwit at 9.47 euro per share (ex dividend) and corresponds to 1.6 billion euros raised by Tim. Yesterday, Inwit s stock in Piazza Affari closed at 8.915 euros, down 4.6%, corresponding to an 8.95 billion euros market capitalization.

The investors consortium will make its investment into a newco (Tim Towers Holco) where a Tim’s 30.2% stake of Inwit will be transferred. Guernsey, a vehicle managed and assisted by Canson Capital Partners, led by the co-founder Matteo Canonaco, has undertaken to subscribe a stake in the newco corresponding to up to 3% of the share capital of Inwit (see Tim and Ardian’s press release here). 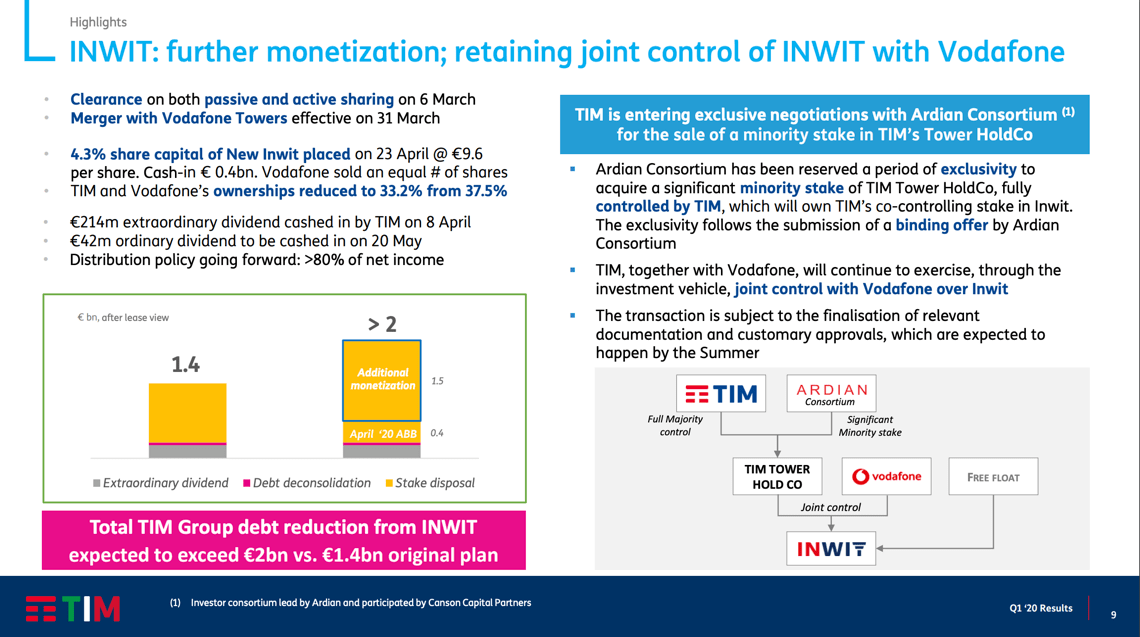 Along with Canson Capital in Guernsey are also investing the Luxembourg vehicle Azimut Private Equity I SCSp and Marco Patuano, former ceo of Edizione Holding and Tim itself who today serves as senior advisor of Nomura, the investment bank that has joined Ardian and its co-investors in the Inwit deal (see here the press release by Azimut). The capital raising target for Azimut PE I investment veichle is up to 110 million euros and will be achieved through the involvement of qualified Italian and European investors and using leverage.

Upon completion of the entire operation, the investors consortium will hold a 49% stake in Tim Towers Holco (and therefore 14.8% of the capital of Inwit), while Tim will retain 51%, thus maintaining joint control over Inwit together with Vodafone Europe BV, as also summarized last May on the occasion of the presentation of Tim’s 2020 Q1 data.

On 23 April, Tim announced the sale of 4.3% of Inwit at 9.6 euros per share, thus reducing its stake to 33.2% and raising 400 million euros. The same stake had been sold by Vodafone, with an increase in the Inwit free float from 25% to 33%. Vodafone and Tim then had entered into a lock-up commitment on the residual shares directly and indirectly in Inwit for a period of 90 days from the settlement date of the transaction (see here a previous article by BeBeez).

The completion of the operation announced yesterday is subject to the fulfillment of certain conditions precedent by 30 September 2020, including the authorization pursuant to the golden power regulation and the confirmation by Consob of the absence of public offer obligations of purchase.

Tim and Vodafone had initially announced that, following the integration of their passive network infrastructures, which gave birth to the second largest listed towerco in Europe, with a portfolio of over 22 thousand towers, would reduce their combined stake to 50, 1% in the new Inwit, that is to say about 25% each. As for Tim, it was explained in a conference call last March that the tlc group would then sell just under half of his residual stake in Inwit (that is 12.4%) for about one billion euros. The teasers were distributed in late January, when among the first names of funds studying the deal here were Ardian Infrastructure (then in partnership with Credit Agricole Assurances and Canson Capital Partners) and F2i (see here a previous article by BeBeez). After a while, KKR was also mentioned as one of the funds concerned.

But then, surprisingly, the sale of the 4.3% of Inwit on the market was announced, through an accelerated bookbuilding procedure. Last May the rumors had returned about the sale of an additional 8% by Tim. Among the names that were mentioned there was always that of Ardian, but also that of Advent International.

Matteo Canonaco, co-founder in 2017 together with his former HSBC colleague James Simpson of Canson Capital Partners, an m & a advisory boutique but also an investor in turn, said: “We are delighted to collaborate with Azimut and Ardian in this historic transaction, the third multi-billion dollar corporate partnership that we have helped to create in as many years since the founding of Canson. This transaction, together with our leading merchant banking role in the Refinitiv and Kantar carve-outs, represents a further milestone for the strengthening of our track record “. Thanks to the participation in these two mega-deals, Canonaco was the only Italian to be ranked as one of top bankers advisors to private equity firms in Europe, the Middle East and Africa deals compiled by MergerLinks in early 2020 (see here the Beez Peak article of Jan 27th).

Pietro Giuliani, chairman of Azimut Holding, commented: “Once again, Azimut demonstrates ability to innovate and create solutions never before presented on the market. Participating in this transaction together with Matteo (Canonanco, editor’s note) and Marco (Patuano, editor’s note), first level industry specialist, is a demonstration of the investment opportunities that we can offer exclusively to our customers and we expect annual returns from them for two. digits. We participate through a leading operator in the development of the telecommunications infrastructure in the recovery of the economic cycle, by bringing together Italian savings with investments in the real economy “.

Marco Patuano commented: “The development of digital infrastructures and, in particular, those related to mobile services will remain a central element for many years for the social evolution and growth of any country in the world. The importance of these infrastructures has been demonstrated once again by the Covid19 emergency, where digital solutions have allowed citizens and businesses to overcome the difficult moment of lock down. The industrial strength of Inwit deriving from long-term relationships with Tim and Vodafone, and the expected developments of 5G and FWA technologies in Europe make this investment a unique opportunity on the international scene”.