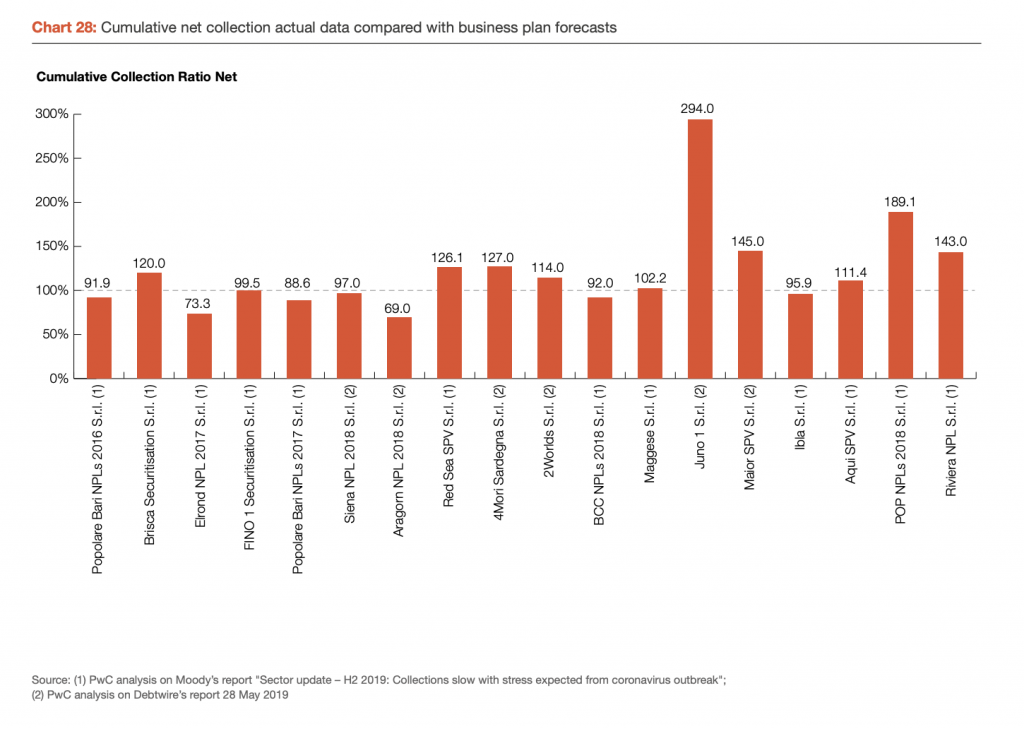 Italian NPLs and UTPs servicer Phoenix Asset Management acquired the 59 million euros face value mezzanine and junior tranches notes of CreVal’s Elrond securitization project (see here a previous post by BeBeez). Phoenix acquired 95% of junior notes from Waterfall Asset Management (face value of 20 million) and of mezzanine notes (42.5 million). Creval owns the remaining 5% of junior and mezzanine notes and the senior tranche of the securtization which is worth 464 million and has the GACS warranty.

Unicredit sold to Banca Ifis unsecured distressed credits worth 335 million euros (see here a previous post by BeBeez). Unicredit sold three portfolios with a face value of 155 million with a forward flow agreement of up to 180 million.

Illimity Bank supported with 13 million euros Davis&Morgan (D&M), an investor and serviced for Npls (see here a previous post by BeBeez). D&M provided real estate assets for 36 million as collateral for the facility. Mizara spv issued abs notes for 18 million. Illimity subscribed all the senior and mezzanine A notes and 5% of the mezzanine B and junior notes. D&M subscribed 95% of the mezzanine B and junior notes. The Oetker Family has 25% of D&M.

Axactor, A&F and Gma signed a partnership for managing Npls and Utps (See here a previous post by BeBeez). Axactor, the Italian subsidiary of Oslo-listed eponymous company, will co-ordinate the activities and plan the strategy together with A&F and Gma. In 2016, Axator acquired CS Union and became the sole owner of the target in 1Q19 after Banca Sistema sold its 10% of the business.

Intesa Sanpaolo and Prelios aim to involve Poste Vita, Cdp, AMCO, Unicredit, Mps, Banco Bpm, banking foundations and pension funds in the Lepanto Project, a 1.5 billion euros fund for relaunching Italian companies in financial distress (see here a previous post by BeBeez). The fund aims to invest in Utpsand is negotiating with the Italian Government for a guarantee.

Apeiron Management, a company that Alessandro Fracanzani heads, received 100 million euros from NYSE-listed Apollo Global Management (which previously poured 300 million in the Italian firm) for investing in distressed assets and credits (See here a previous post by BeBeez). Apollo has assets under management for 360 billion US Dollars. Aperion’s investment tickets amount to 5 – 50 million euros, but the fund could also consider bigger transactions.

Oxy Capital and Vertex Partner will act as advisors for Piattaforma di Rilancio Industriale (PRI), a platform of funds for investing in distressed companies and credits operating in the sectors of tourism, food an mechanics (see here a previous post by BeBeez). PRI will launch funds that will support banks for recovering their distressed credits and funds for institutional investors with a focus on turnaround. PRI also signed a partnership with Generalfinance, an Italian investor in distressed factoring, for supporting the working capital of Italian SMEs. Franco Bassanini, Andrea Beltratti, Andrea Mascetti, and Marco Mazzucchelli will be part of PRI’s advisory board.

Finanziaria Tosinvest and Cisa required further information about bankrupted Edisud and Mediterranea, the publisher and the firm that collects advertising spaces for Italian paper La Gazzetta del Mezzogiorno (See here a previous post by BeBeez). Edisud has debt of 40.4 million and in 2016-2018 it posted losses of 13 million. Mediterranea has losses of 0.438 million and debts of about 0.8 million.

Troubled Italian fashion firm Stefanel attracted the interest of a trade buyer and two financial investors (See here a previous post by BeBeez). In 3Q18, Stefanel posted losses of 20.9 million, a net financial debt of 94.2 million and equity of 7.5 million. Earlier in January, the company succesfully applied for receivership.

The Italian investment bank Equita received a financing facility of 30 million euros from Banco Bpm and Crèdit Agricole Italia (See here a previous post by BeBeez). Equita will receive a 5 million revolving credit line that will expire on 30 June 2023, an amortising credit line of up to 25 million due to end on 30 June 2025 and pay back 8 biannual instalments from December 2021. Equita will invest these resources in M&A and initiatives in the alternative asset management sector. Sign up here for BeBeez Newsletter about Private Debt and receive all the last 24 hours updates for the sector. BeBeez welcomes you after the lockdown period with an unmissable offer: subscription to BeBeez News Premium and BeBeez Private Data for only 550 euros plus VAT from 1 June to 31 December 2020 Click here for more info. Equita is one of the investors that BeBeez Private Data monitors. Find out here how to subscribe to the Combo Version that includes the reports and the insight views of BeBeez News Premium 12 months for 110 euros per month.

Consultinvest, a financial services firm that Maurizio Vitolo heads, acquired 51% of insurance broker Multilife (See here a previous post by BeBeez). Consultinvest invested 1.5 million in the 17 million bond that Milan-listed Exprivia issued for acquiring 81% of Italtel in December 2017. In December 2019, Consultinvest subscribed 2 million of the bond that Asja Ambiente issued

Nice Footwear, an Italian sneakers producer, issued a Milan-listed bond of 3 million euros that could increase to 5 million (see here a previous post by BeBeez). This senior unsecured bond has a 6 years maturity (2 July 2026), pays a 4.375% coupon and has an amortizing reimbursement structure from the third year. Bruno Conterno is the company’s ceo. Nice Footwear has sales in the region of 24 million, an ebitda of 1.8 million and net profits of 0.5 million. The company aims to increase its export from current 52% of sales to 80% in the mid term and could carry on further extraordinary finance transactions.

E-Box Energy One, part of E-Box, a renewable energy company, received a financing facility of 12.3 million euros from Bnl Bnp Paribas (see here a previous post by BeBeez). The company will invest these proceeds in refinancing 4 photovoltaic plants with a power of 6 MW. Earlier in January, Ensource Italy, another subsidiary of E-Box, received a project financing facility of 27 million from Unicredit.

Zenith Service, a subsidiary of Arrow Global, carried on a securitization of Italian corporate credits that [email protected], part of Teamsystem, selected (see here a previous post by BeBeez). Banco Bpm is the sole subscriber of the single-class revolving notes of the securitization.

Italian eyewear company Marcolin, an asset that Pai Partners acquired in 2012 through a delisting, received a 50 million euros financing facility from UniCredit, Banco Bpm, Deutsche Bank and Credit Suisse for whigh Sace provided a 90% warranty (See here a previous post by BeBeez). Marcolin’s shareholder provided a 25 million facility due to mature in December 2025 and paying a 6% coupon.  The 50 million facility will end in 5 years and has an amortizing structure that pays 350 basis points on top of the Euribor 3 months. In 2013, Marcolin issued a Milan-listed bond of 200 million due to mature in November 2019 and paying a coupon of 8.5%, such resources financed the acquisition of US competitor Viva Optique and the refinancing of the company’s existing debt. Marcolin repaid the bond in February 2017. In 2017, Marcolin issued another 250 million bond due to mature in 6 years callable in the first 12 months.

BeBeez will be the media partner for an event about distressed credits of Alma Iura and RR&P Commercialisti e Avvocati associati that will take place in Verona on 13 October 2020 (See here a previous post by BeBeez). Piergiuseppe D’Innocenzo will hold a keynote speech, Stefania Peveraro, the Editor in Chief of BeBeez will interview Rainer Masera, the former ceo of Gruppo Sanpaolo Imi and head of of the event’s scientific board whose further members are Paola Maria Di Leonardo, Riccardo Genghini, Gaetano Lattanzi, Silvia Lodi, Maddalena Mandarà, Giuseppe Mantini, Riccardo Marciò, Federico Rizzetto, Marco Rossi, Maurizio Silvi, and Carlo Viola.