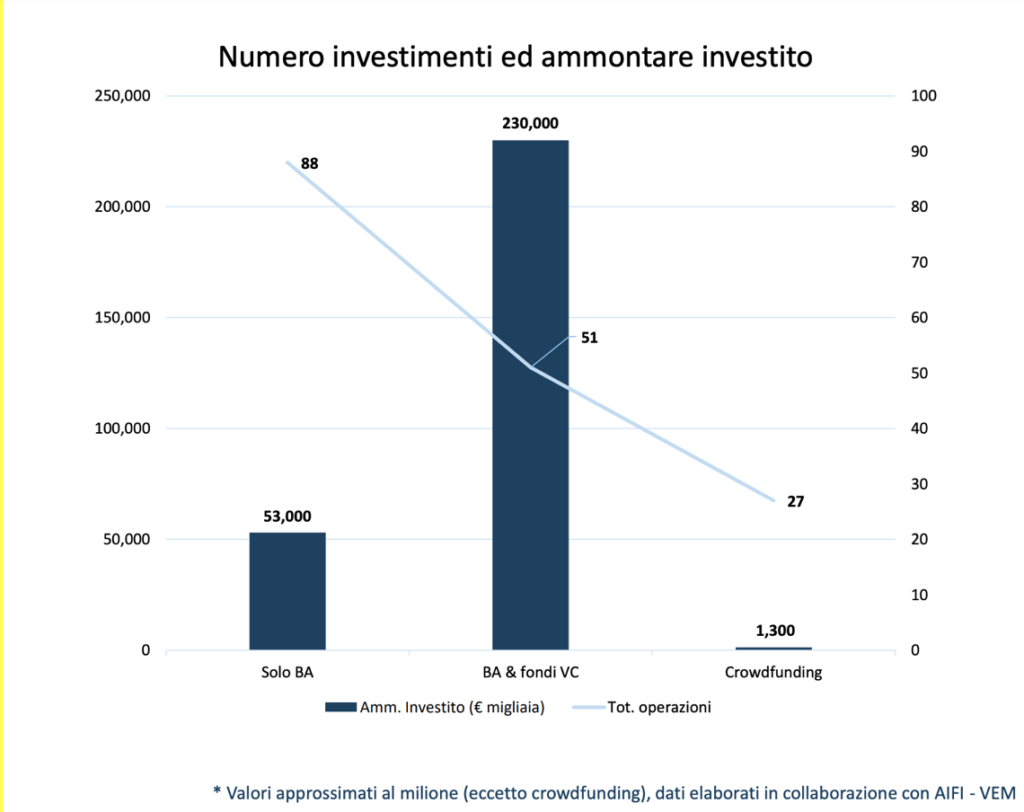 In 2019 Italian business angels invested 52.7 million euros (+32.7%, 46.5 million yoy) in 88 transactions (167 deals), said a survey of IBAN (Italian Business Angels Network) (see here a previous post by BeBeez). Business angels closed 51 transactions together with venture capital funds for a cumulated value of investments for 230 million and raised 1.3 million through 27 equity crowdfunding campaigns. Further details are available in the BeBeez Venture Report (find out here how to subscribe to BeBeez News Premium for just 20 euros per month and read the BeBeez Reports and Insight Views).

Soplaya, a marketplace for restaurants and food producers, raised a 3.5 million euros round that P101 and Italia 500 led (see here a previous post by BeBeez). Cdp Venture Capital also poured resources in the Soplaya, which attracted business angels’ funds in 2018 and in 2020. Mauro Germani, Gian Carlo Cesarin, Ivan Litsvinenka and Davide Marchesi founded the company in 2018 and will invest the raised proceeds in the business’ proprietary technology, data analysis, and the organic development ahead of a 10 million turnover target to achieve by 2021.

Finlombarda is looking for one or more fintech partner for launching projects that could support the working capital of Lombardy’s SMEs (see here a previous post by BeBeez). Finlombarda is holding preliminary talks with innovative operators in the fields of supply chain and inventory finance but will listen to further proposals by 20 July, Monday.

Zucchetti, an Italian IT company for the B2B channel, acquired Scloby, a cloud platform for handling in remote mode retail activities (see here a previous post by BeBeez). Scloby was born in 2013 with the support of I3P, the incubator of Turin Polytechnic University and has sales of 0.394 million euros with an ebitda of minus 0.2 million.

Cosaporto.it, a startup that delivers high-end products at home, raised a round of 1.2 million euros from private investors and Lazio Innova’s Innova Venture, a venture capital fund that raised resourced of the European Union (see here a previous post by BeBeez). Stefano Manili founded the Rome-based company in 2017. Cosaporto has sales of 52,000 euros, an ebitda of minus 66,000 euros and debts of 13,000 euros. The company will invest such proceeds in its organic development and expansion.

Italian online drugstore 1000Farmacie raised a seed round of 1.5 million euros from Fin Posillipo, Healthware Ventures (fka Esense Ventures) and other investors (see here a previous post by BeBeez). Nicolò Petrone, the head of Europe of Medici platform, founded 1000Farmacie in 2019 which will invest these proceeds in its organic development and hire Mohamed Younes (the former head of operations of Citiscoot and Foodora) and Alberto Marchetti (the former Global Demand Planner of Brooks Brothers).

Italian digital wealth manager Moneyfarm shared its API codes on Fabrick (see here a previous post by BeBeez). Thanks to this partnership, banks and brokers will be able to integrate Moneyfarm services for flexible ETF investments with their offer. Paolo Galvani and Giovanni Daprà founded Moneyfarm in 2011 and since then raised 110 million euros from investors. In September 2019, Poste Italiane, Allianz Asset Management and other investors poured 40 million in the company which acquired London-based Ernest (Cristoforo Mione, Lorenzo Sicilia and Niall Bellabarba founded it in 2016) in October 2017.

Bocconi for Innovation (B4i) and Plug & Play (P&P) launched the Bocconi for Innovation Startup Call (see here a previous post by BeBeez). B4i is the pre-acceleration and acceleration platform of  Milan’s Bocconi University. P&P is an open innovation platform that liaises startups with global corporates and international venture capital funds. Deadline for applications is 19 July 2020, Sunday. Winners will receive a 30,000 euros grant and the access to a four months acceleration programme with mentoring and services.

Supermercato24, an Italian online marketplace, rebranded as Everli to make its name easier to adapt to foreign clients and users (see here a previous post by BeBeez). Earlier in February, the company attracted 11 million euros from DIP Capital, Fondo Italiano Tecnologia e Crescita – FITEC (fka FII Tech Growth – part of Fondo Italiano d’Investimento), 360 Capital Partners, and Innogest. In July 2016, the company raised 3 million from Innogest and 360 Capital Partners, which already invested in the company in early 2015, together with other business angels. Federico Sargenti heads Everli since 2016.

Borsa del Credito (BDC) signed an agreement with Confesercenti Nazionale (the Italian association of retailers) for allowing associated quick access to digital channels for credit (see here a previous post by BeBeez). BDC is an Italian fintech platform for SMEs loans in which P101 invested together with Azimut and GC Holding. The platform will provide facilities of 50,000 – 0.5 million euros with a 12 – 60 months tenure;  Cash Anti COVID-19 Fase 2, financing of 50,000 – 0.5 million with a mandate of up to 6 years with 12 months of pre-amortising period with the warranty of Fondo di Garanzia. Antonio Lafiosca, Alessandro Andreozzi and Ivan Pellegrini founded Borsa del Credito in October 2013. The company opened a P2P lending channel in 2015.