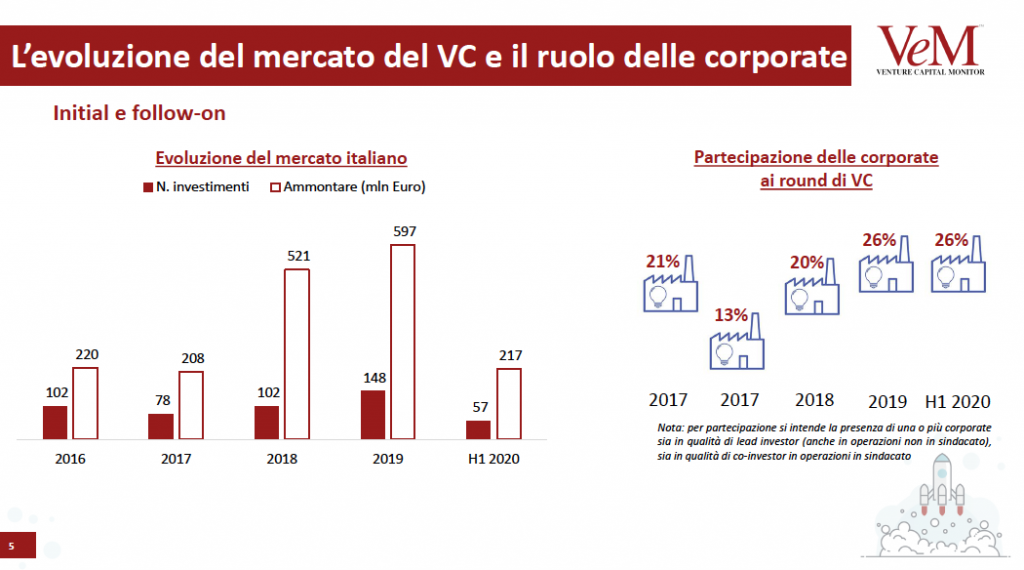 Italian Insuretech Yolo attracted an investment round of 3 million euros that Neva Finventures led, while Intesa Sanpaolo Vita acquired a 2.5% of the business (see here a previous post by BeBeez). Primomiglio, Banca di Piacenza, Be Shaping the Future, and CRIF joined the round. Simone Ranucci Brandimarte, the founder of Buongiorno and Glamoo, founded Yolo in 2017 together with ceo Gianluca de Cobelli and Italian broker Mansutti. The company raised 10 million since its birth.

ABHH, the owner of Alfa Bank, acquired UK invoice financing platform Lendflo, in which Italy’s H-Farm invested in 2018 (see here a previous post by BeBeez). H-Farm had a 3% of the business that acquired through a seed round of 0.6 million British Pounds that Apex Ventures and Thompson Crosby led in 2019. H-Farm made a 13X gain out of its investment. Chris Smith, John Smith and Rémi Tuyaerts founded London-based Lendflo in 2017.

Leaf Space signed a partnership with UK’s Smallspark Space Systems (see here a previous post by BeBeez). The partnership involves joint bids for projects for the UK Government and other UK commercial operators, with the aim of becoming the main contractor for services to OneWeb, a constellation of 650 satellites that will provide worldwide services for satellite internet and broadband. Leaf Space has sales of 0.224 million euros with an ebitda of minus 0.604 million.

Italian barbers shops chain Barberino’s increased to 1.25 million euros the target of its equity crowdfunding campaign on Mamacrowd (see here a previous post by BeBeez). The company’s pre-money value amounts to 5.2 million. Barberino already hit its hardcap target of 1.7 million and attracted the resources of bespoke Italian entrepreneurs and members of the business community such as Fabio Mondini de Focatiis, Federico Monguzzi, Net4Capital, OneDay Group, and Numenor. The company will invest such proceeds in its organic development. Michele Callegari and Niccolò Bencini founded Barberino’s in 2015. The company has sales of 1.34 million and an ebitda of 62,000 euros.

Investinit, an investor in startups, launched an equity crowdfunding campaign on WeAreStarting (see here a previous post by BeBeez). The company set a target of 0.5 million – 2 million euros and will invest 15% of the raised proceeds in startups and 85% in vehicles that support them. Mattia Silvestrin, Daniele Dal Bo’, Diego Lazzari, Ilaria Fracasso, Eleonora Diana, and Francesca Notaro founded Investinit. The company signed a partnership with FocusFuturo, a financial consulting firm that Paolo Vacchino founded with Antonio Assereto.

LIFEdata, Sooneat and Hexagro are the winners of the call for startup Ceetrus 4 Innovation (C4I) (See here a previous post by BeBeez). Ceetrus Italy launched the challenge earlier in March together with Milan accelerator PoliHub. Each of the winner will receive a 25,000 euros grant for financing their activities for technology development & validation in view of creating a Proof of Concept (PoC) for a market validation. Manufacty received a special mention.

#RestartLombardia, the call that VGen LAB launched earlier in May together with Open Innovation Lombardia, is now over (See here a previous post by BeBeez). The winners of this startup challenge are Ioota, Latitudo, OaCP, Plusimple, Quickly Pro, Senpai, Soonapse, SynDiag, Tactile Robots, and Wenda. The winners of the general challenge are Furnitile, Behind the Glass, My Lombardia, Urban Lab, in-SOAP, Recharge-Mi, Boot, Progetto MMXII, and FashionTech. Open Innovation Lombardia is a platform of Regione Lombardia for the innovation. VGen, a community of Rome’s Tor Vergata University, founded VGen LAB in 2018. In January 2019, VGen opened a bureau in Milan with a team of Bocconi University Students.

Alba Robot, an Italian startup that received the support of I3P, the incubator of Turin Polytechnic University, joined Alexa Next Stage (ANS), the acceleration programme of Techstars and of Alexa Fund, the 200 million US Dollars fund of Amazon (see here a previous post by BeBeez).  The other companies that will join the ANS programme are Symbl, Blerp, Sybel, Blue Fever, Lingvist, and Kardome. Alba Robot is a spin-off of Moschini and Teoresi Group born in 2019. The company manufactures smart wheelchairs.

Assofintech, the Italian association of fintech firms, appointed Maurizio Bernardo as its new president and Fabrizio Barini as new general secretary (See here a previous post by BeBeez). They will replace Fabio Brambilla and Fabio Allegreni in their respective roles.

Sia and Crif signed a strategic partnership for the open banking (see here a previous post by BeBeez). The companies aim to accelerate the innovation of banks, corporations and fintech.