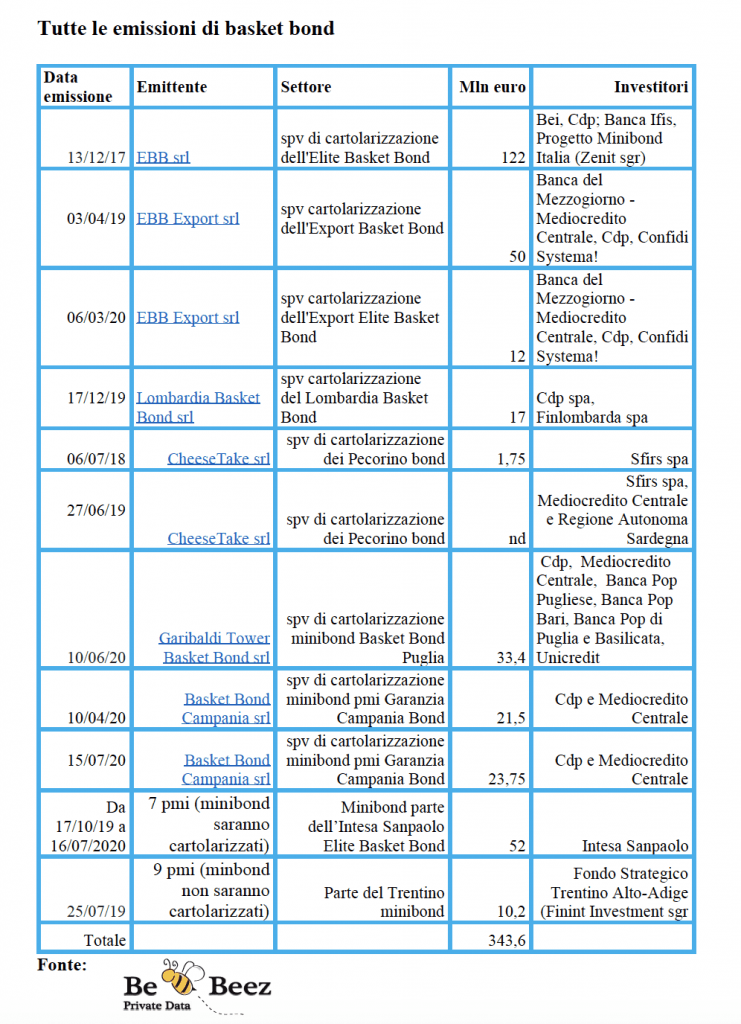 The panelists of the Caffé di BeBeez in aroma web of 20 July, Monday, said that the perspectives of the Basket bonds for SMEs are very positive as it is possible to get warranties for up to 90% of the issuances (see here a previous post by BeBeez). Banca Finint sponsored the event. Stefania Peveraro, the Chief Editor of BeBeez, moderated a round table with Giovanni Perissinotto, Andrea Nuzzi, , Massimiliano Lagreca, Mario Mustilli, Giampaolo Pavia, Lucio Izzi. Subscribers to BeBeez News Premium may see here the BeBeez Report about the Basket Bond sector.

Intesa Sanpaolo received the warranty of Fondo Centrale di Garanzia pmi for two tranched cover portfolios worth 500 million euros each (see here a previous post by BeBeez). The bank must provide such facilities by 30 November 2021. These portfolios have a tenure of 72 months while their repayment can take place 24 months after the issuance for supporting the companies that faced troubles after the coronavirus-related lockdown. Companies with a Standard &Poor’s rating below BB will get at least 20% of these tranched cover financing facilities for which Fondo di garanzia will provide a cash collateral for the losses on the junior tranche.

Mondial Due, an Italian producer of components for the manufacturing of shoes, issued a 2 million euros senior secured minibond that Zenit subscribed (see here a previous post by BeBeez). Fondo Centrale provided a warranty for 90% of the liability that is due to mature on 31 December 2024 and pays a biannual coupon of 5.75%. Mondial Due will invest the raised proceeds in its organic development. Gianfranco Doria and Sandro Mandolesi head Mondial Due which has sales of 9.44 million with an ebitda of 0.277 million. Sign up here for BeBeez Newsletter about Private Debt and receive all the last 24 hours updates for the sector.

Colacem, an Italian producer of cement, received a financing facility of 45 million euros from Unicredit, Banco BPM and MPS Capital Services and for which Sace provided a warranty (see here a previous post by BeBeez). Colacem belongs to the families of Pasquale, Giovanni, Franco, and Carlo Colaiacovo. The Colaiacovo family founded the company in 1966. Colacem has sales of 235 million with an ebitda of 14.7 million and a net financial debt of 115.6 million.

Milan deep tech factory e-Novia concluded the private placement of a convertible bond of 21 million euros (see here a previous post by BeBeez). The company carried on such placement also through an equity crowdfunding campaign on BackToWork which allowed to raise 7.665 million on top of banking loans for 9 million. Intesa Sanpaolo Private Banking supported the campaign of e-Novia which has sales of 10.6 million (+26% yoy), an ebitda of 0.789 million (+36%) and net cash in the region of 6.5 million. Vincenzo Russi (ceo), Ivo Boniolo (cio) and Cristiano Spelta (cfo) are the founders of e-Novia which attracted resources of bespoke Italian companies and investors like Brembo, Dompè, Landi Renzo, Fassi, Dainese, Pelliconi, Streparava, Eldor, Rubinetterie Bresciane, and Mermec. The company will invest such proceeds in its organic development. Sign up here for BeBeez Newsletter about Private Debt and receive all the last 24 hours updates for the sector.

Supply Chain Fund (SCF), the vehicle that Groupama am launched for investing in SMEs invoice financing, cashed invoices of Italian steel company Marcegaglia (see here a previous post by BeBeez). The fund purchased a 7 million invoice that a big foreign steel producer issued and committed to buy further invoices worth 60 million in the next 12 months. SCF is holding talks for cashing 60 million worth invoices of a foreign supplyer of Marcegaglia. Emma Marcegaglia, the vice-president of the eponymous group, said to BeBeez that the group may collaborate further with SCF. Sign up here for BeBeez Newsletter about Private Debt and receive all the last 24 hours updates for the sector.

Milan-listed Iervolino Entertainment issued a 7-years bond of 8 million euros with an amortizing structure and a coupon of 4.07% (see here a previous post by BeBeez). Intesa Sanpaolo subscribed the issuance that will be part of the securitization programme Elite basket bond of the bank. Iervolino Entertainment’s majority belongs to Andrea Iervolino and Lady Monika Bacardi and has sales of 80 million, with an ebitda of 73.4 million and a net financial debt of 0.55 million euros. Sign up here for BeBeez Newsletter about Private Debt and receive all the last 24 hours updates for the sector.

Direct lending platform October launched an instant lending service for the SMEs that may raise 30,000 – 0.25 million euros with a Government warranty (See here a previous post by BeBeez).  The instant lending of October is based on machine learning risk assessment. Oliver Goy founded October (fka Lendix) in 2014. In June 2018 the company raised 32 million from CIR, the financial firm of Carlo De Benedetti, and other investors. Sign up here for BeBeez Newsletter about Private Debt and receive all the last 24 hours updates for the sector.

Rome’s Court accepted the receivership application of troubled Milan-listed contractor Astaldi (see here a previous post by BeBeez). This is a further step forward the integration of the company in Progetto Italia, a vehicle that aims to aggregate the sector companies and in which Webuild (fka Salini Impregilo) has a majority role with the support of Cassa Depositi e Prestiti (anchor investor), Unicredit, Intesa Sanpaolo and Banco Bpm.

BeBeez contribution to To Lease 2020 Report of Assilea (the association of Italian leasing firms) says that between 2017 and 2019, leasing firms sold distressed credits for almost 6.1 billion euros, while the total figure for financial firms amounted to 197 billion (see here a previous post by BeBeez). Assilea’s coo Luigi Macchiola said that the association is working on a partnership with Polis sgr for the launch of a fund for investing in repossessed real estate assets (see here a previous post by BeBeez).

Borgosesia, a Milan-listed real estate developer, launched a capital increase of 7.25 million euros for its subsidiary BGS REC, an investor and servicer for the distressed credits (see here a previous post by BeBeez). The company will issue ordinary stakes for 2.25 million that Borgosesia wholly subscribed and special rights issues for 5 million that will be also open to new investors until 31 December 2020.

Prelios Innovation (a fintech firm of Gruppo Prelios) acquired from Centrale Credit Solutions (CCS, part of Cassa Centrale Banca\CCB – Credito Cooperativo Italiano) a single name mortgage credit worth 8 million euros through its platform BlinkS (See here a previous post by BeBeez). CCS is a structurer of securitizations for the sale of the distressed credits of the 79 banks that belong to CCB CCB originated such credit. This deal is part of the sale of NPLs amounting to 35 million (27 million of these are secured) that Prelios innovation is carrying on through BlinkS.

In 1H20, Generalfinance, a provider of factoring finance for distressed companies, posted profits of 2.7 million euros (+45% yoy); a brokerage margin of 7.8 million (+29%); a turnover of 321 million (+21%); issued credits for 226 million (+13%); an annualised Roe of 31% (See here a previous post by BeBeez). Euler Hermes, a credit insurer, provides a warranty for 75% of the invoices that Generalfinance cashes. Generalfinance operative costs amount to 3.8 million (+15%).