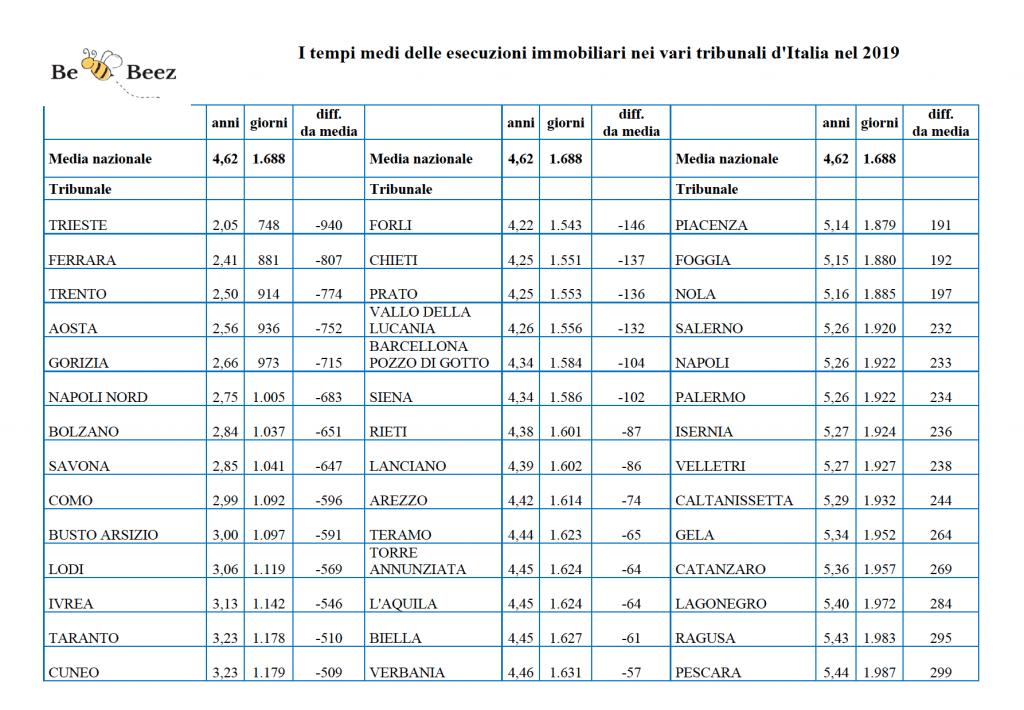 Italian Courts deferred more than 30,000 auctions for the repossession of real estate assets which are collateral of non-performing loans for a total value of 3.7 billion euros said Osservatorio T6 (see here a previous post by BeBeez). Italian courts are not as active as they were before the the lockdown due to the coronavirus emergency.

On 25 August, Tuesday, rumours for the creation of an European bad bank boosted the shares price of Italian banks (see here a previous post by BeBeez). On 25 September Valdis Dombrovskis, Irene Tinagli and other top members of the European Commission will discuss such a project. The European stock of distressed credits currently amounts to 500 billion, but could increase to 1,000 billion after the lockdown. The bad bank could issue bonds that commercial banks may subscribe in exchange of portfolios of Npls and Utps. The banks may use such bonds as collaterals for their refinancing operations with theECB.

The Piedmont Region’s Agenzia Territoriale per la Casa (ATC) aims to sell a portfolio of unsercured non performing loans grossly worth 24.6 million euros (see here a previous post by BeBeez). The deadline for the expression of interest is set for 23 September, Wednesday.

Bidders for Ferrarini, the Italian food company in receivership, are fiercely battling for acquiring the asset (see here aprevious post by BeBeez). On September 1st the Ferrarini Family and Gruppo Pini will table a bid that includes better conditions for the company’s lenders. Ferrarini reportedly attracted an offer from Intesa Sanpaolo and Unicredit, Ferrarini’s main creditors together with Mediobanca and Amco (200 million credits), together with Gruppo Bonterre – Grandi Salumifici Italiani, O.P.A.S. and HP. Sido Bonfatti is the legal advisor of the Ferrarini Family.

In 1H20, Montepaschi gross non performing exposures amounted to 11.6 billion euros (5.9 billion net) with a gross NPE ratio of 11.8% (see here a previous post by BeBeez). The ratio will be below 4% (under 2% net) once Mps will complete the sale to AMCO of a portfolio of distressed credits worth 8.1 billion and of other assets.

In 2Q20, the assets under management of Credito Fondiario, an Elliott Management portfolio company, amounted to 50.8 billion euros (51.1 billions in 1Q20) (see here a previous post by BeBeez). The firm managed to recover 244 million euros of credits (up 26% from 1Q19) and pushed its brokerage margin to 57.5 million, its net profits to 7.3 million, equity to 404.9 million, and the CET1 ratio in the region of 17%.

Iccrea Banca will carry on the securitization of a portfolio of NPLs worth 2 billion euros and for its senior tranche it will apply for the GACS warranty (see here a previous post by BeBeez). Milan-listed doValue already acquired 400 million of this portfolio and will act as special and master servicer.

Illimity Bank sold to Ifis Npl (Banca Ifis) a portfolio of unsecured distressed credits worth 266 million euros that acquired in 2019 (see here a previous post by BeBeez). The portfolio is made of consumer and corporate credits.

Intrum Italy, a company that belongs to Intesa Sanpaolo (49%) and to Intrum Group (51%), signed a partnership with NPLs RE_Solutions, a subsidiary of RINA Prima Value Services and in which Gruppo Gabettiinvested (See here a previous post by BeBeez). The partnership will allow the companies to collaborate for auctioning repossessed real estate assets. Sign up here for BeBeez Newsletter about Private Debt and receive all the last 24 hours updates for the sector. BeBeez is wishing you a happy summer. Don’t miss the chance to subscribe to BeBeez News Premium and BeBeez Private Data until 31 December 2020 for just 350 euros plus vat.Italian shipping company Gruppo Perseveranza signed an agreement for restructuring its 250 million euros debt with Irish asset manager Davy Global Fund Management (DGFM), Pillarstone Italy, IDeA CCR,Taconic Capital, and Hamburg Commercial Bank AG (see here a previous post by BeBeez). The restructuring agreement involves Perseveranza di Navigazione and its subsidiaries Vis Tankers, Perseveranza Shipping abd Fertilia, a joint venture that Gruppo Perseveranza signed with SetSea.

Officine Maccaferri and Carlyle is expected to apply with Bologna Court for receiving fresh resources for 45 million euros (see here a previous post by BeBeez). Once completed such procedure, the fund may take the majority of Officine. Bologna Court rejected the previous request of the company for fresh resources of 60 million but agreed a an extension until 30 November 2020 for the receivership procedure of Samp. Samputensili Machine Tools attracted the interest of Germany’s Emag.

Venice Court rejected the receivership application of Pasta Zara in light of the appeal of Banca Finint, Finint Investmentsand Banco delle Tre Venezie (see here a previous post by BeBeez). However, Pasta Zara’s chairman Furio Bragagnolo will appeal against such a decision of the Court. Pasta Zara has a gross financial debt of 295.3 million euros, including a 5 million euros minibond (178 million with banks and 73 million of these linked to credit lines that Banca Popolare di Vicenza and Veneto Banca provided and now belong to AMCO). Furthermore, Ffauf, the Luxembourg holding of the Bragagnolo Family, has debt of 50 million with Bank of China. Pasta Zara’s controlling shareholder is the Bragagnolo Family, Friulia owns 11.25% and Sace-Simest 11.76%.

Anthilia Capital Partners subscribed 8 million euros out of a 12 million senior minibond that Renergetica issued in July (See here a previous post by BeBeez). The company also issued a subordinated minibond of 4 million. Both the liabilities will mature on 31 December 2025 with a 5.70% coupon. Renergetica has sales of 9.3 million with a 44% ebitda. Sign up here for BeBeez Newsletter about Private Debt and receive all the last 24 hours updates for the sector. BeBeez is wishing you a happy summer. Don’t miss the chance to subscribe to BeBeez News Premium and BeBeez Private Data until 31 December 2020 for just 350 euros plus vat.

Unicredit provided ReiThera, FBH, Servizi Integrati, and Gargiulo & Maiello with Sace- backed financing facilities (see here a previous post by BeBeez). ReiThera, a biotech company, received a 3.5 million euros financing (2.9 million fromUnicredit Leasing and 0.6 million with the warranty of Fondo Centrale di Garanzia). FBH, a logistic company, borrowed 15 million with a 6-years tenure (2 years of preamortisement) for supporting its organic development and its working capital. Servizi Integrati, a maintenance and management company for real estate, received a 2 million facility. Gargiulo & Maiello is the owner of the perfumery chain Idea Bellezza and borrowed 5 million that will invest in its working capital and opening further stores.

Cassa Depositi e Prestiti and Unicredit issued a 5-years ESG linked Shuldshein loan (or Schuldscheindarlehen – SSD) of 120 million euros for Bracco Imaging, a subsidiary of Gruppo Bracco (see here a previous post by BeBeez). The company will invest such proceeds in its international expansion. With the SSD, a company raises funds from a pool of lenders that can sell the facility to other investors without giving any communication to the borrower. The SSD is a collateral for the refinancing transaction, according to the ECB guidelines. In November 2014, Bracco Imaging, whose ceo is Fulvio Renoldi Bracco, issued a Luxembourg-listed bond of 100 million euros due to mature on 12 November 2021 with a 3.17% coupon.

Fiorini Packaging issued a 4 million euros minibond that is part of the Basket Bond Programme of Intesa Sanpaolo and Elite (see here a previous post by BeBeez). Fiorini generates abroad 65% of its above 54 million euros sales. The company’s ebitda is of 4.3 million or 7.8% of the sales. The companies that previously joined the Basket Bond Programme are Gruppo EdiliziAcrobatica (10 million), Iervolino Entertainment, Ambienthesis, Ledoga, M-Cube, Gruppo Illiria, Sigma, and Gruppo Cittadini dell’Ordine. Sign up here for BeBeez Newsletter about Private Debt and receive all the last 24 hours updates for the sector. BeBeez is wishing you a happy summer. Don’t miss the chance to subscribe to BeBeez News Premium and BeBeez Private Data until 31 December 2020 for just 350 euros plus vat.