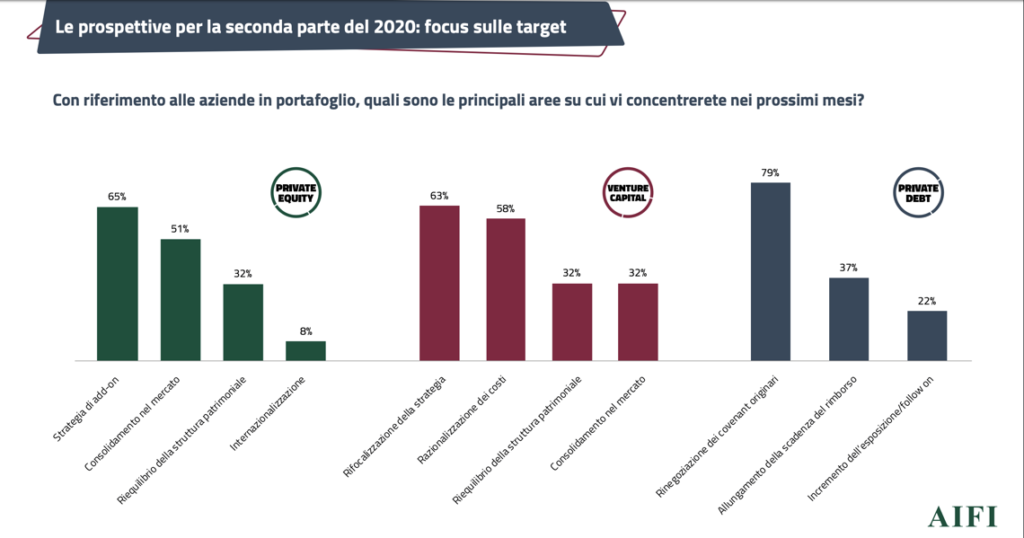 After the coronavirus-related lockdown, private equity funds are prioritising add-on acquisitions for their portfolio companies, said a report of AIFI (the Italian Association of investors in Private Equity, Venture Capital and Private Debt) (see here a previous post by BeBeez). Venture capitals’ focus is on cost rationalization and managing portoflio assets, while private debt funds are renegotiating convenants ahead of fundraising, said the report. Private equity may look for further investments, but exit multiples will lower by 10-20% and delaly sales. The readers of BeBeez News Premium have access to the BeBeez Reports and Insight Views.

The 20 chairmen’s meeting of the football teams of Lega Calcio Serie A agreed to create a media company with the support of private equity funds (see here a previous post by BeBeez). Lega is currently assessing the bid of Advent International-CVC Capital Partners-FSI that may buy 10% of the media company of the Lega whose value amounts to 16 billion euros. Lazard is advising Lega. Goldman Sachs is financing these funds. Bain Capital and NB Renaissance Partners tabled a competing bid on the ground of an enterprise value of 13 billion for a 10% of the media company. Morgan Stanley, Mediobanca and Nomura are financing Bain and NB.

Dws Alternatives Global Limited acquired Medipass from KOS, a company that belongs to Milan-listed CIR and in which F2i Healthcare invested(See here a previous post by BeBeez). Dws will carry on the acquisition through Inframedica, one of its portfolio companies, on the ground of an enterprise value of 169.2 million euros and an equity value in the region of 103 million.

Ruffini Partecipazioni Holding (RPH) switched to a newco its holding in investment company Archive and its real estate activities  in order to open its capital to other investors (see here a previous post by BeBeez). RPH is the investment holding of Remo Ruffini, the founder Milan-listed fashion group Moncler. A report of Mediobanca about the company assigned a neutral rating to the stock and set a target price of 33 euros per share. The report said that RPH made such a move for allowing other investors to support the company and to make the newco a private equity vehicle that. In October 2018, Archive acquired 40% of  Langosteria Holding, the owner of restaurant brands Langosteria, Langosteria Bistrot, Langosteria Café Milano, and Langosteria Paraggi. In October 2019, Archive acquired 49% of womenswear brand The Attico.

Milan-listed Tamburi Investment Partners is launching an investment vehicle for Utps with resources of 500-600 million euros as Gianni Tamburi said during Milano Capitali, an event about private capital for which BeBeez acted as media partner (See here a previous post by BeBeez and the recorded video of the event). Tamburi pointed out that Itaca aims to invest in 15 companies. Sergio Iasi, Tamburi and Angelo Catapano are working on the project. Tip has net profits of 99.9 million euros and equity of 902 million. Tamburi Investment Partners is one of the private capital investors that BeBeez Private Data monitors. Find out here how to subscribe to the Combo version that includes BeBeez News Premium

Fondo Italiano per l’Efficienza Energetica raised 125 million euros ahead of a target of 175 millions (see here a previous post by BeBeez). FIEE attracted 40 million from the European Investment Bank and other institutional investors and family offices. FIEE posted a 10.6% Irr and aims to double the ivnested capital by 12 years.

Align Capital Partners acquired 64.5% of Electronic Transaction Consultants Corporation from Milan-listed Atlantia (see here a previous post by BeBeez). ETC is based in Texas, and is worth 297 million US Dollars according Mediobanca Securities. On 3 September, Thursday, Atlantia created Autostrade Concessioni e Costruzioni a newco ahead of the spinoff and the listing of Autostrade per l’Italia (ASPI) (see here a previous post by BeBeez). However, Atlantia is reportedly conducting a dual-track IPO for ASPI, an asset of which it owns 88%.

Italmobiliare signed the closing of the acquisition of a further 60% of Officina Profumo Farmaceutica di Santa Maria Novella for 120 million euros as announced last August and after having invested 40 million in January for a 20% of the target (see here a previous post by BeBeez). Carlo Pesenti, the ceo of Italmobiliare, is the new chairman of Officina Profumo , while Gian Luca Perris will be the ceo. Further new directors of the companies are Daniele Berti, Laura Zanetti, Allegra Antinori and Matteo Capellini. Eugenio Alphandery will hold 20% of the business and the role of vicepresident. Officina has sales of 31.5 million and an ebitda of above 12 million. Italmobiliare is also holding talks with Casa della Salute, a network of private hospitals (See here a previous post by BeBeez). Casa della Salute’s controlling shareholder is Marco Fertonani.

Innovery, an Italian cybersecurity company that belongs to Wise Equity, acquired N.B. Service, an Italian competitor (see here a previous post by BeBeez). The target’s ceo Davide Bocchino sold his interest in the business, but will keep his executive role. N.B. Service has sales in the region of 5 million with an ebitda of 0.533 million and net cash of 0.205 million. In July 2019, Innovery acquired Proxy, while in 2020 it purchased Imoì and Obiectivo.

Gradiente, La Finanziaria Trentina and undisclosed family offices acquired 60% of Arcansas from the  Scriattoli Family (see here a previous post by BeBeez). Vendors will keep 40% of the business. Banco Bpm financed the transaction. Arcansas has sales in the region of 30 million euros. Gradiente is one of the private capital investors that BeBeez Private Data monitors.

UK’s Crest Leather acquired Italian competitor I.C. Industria Conciaria (see here a previous post by BeBeez). The target has sales of 25.3 million euros with an ebitda of 5.3 million.Here are all the last deals on leather makers in Italy.

Hippocrates Holding, an Italian network of drugstores, hired Mediobanca and an undisclosed financial advisor for exploring options (see here a previous post by BeBeez). Hippocrates could be worth 350 million euros while its sales amount to 200 million with an ebitda o 40 million. The asset attracted the interest of EQT, Permira, Pai, Investindustrial, and F2i, who acquired Farmacrimi in November 2018.

Edison is holding talks with F2i for buying 70% of E2i Energie Speciali (of which it already owns 30%) (See here a previous post by BeBeez). 2i Rete Gas (a company that belongs to F2i, Ardian and Apg) made an offer for Edison’s Infrastrutture Distribuzione Gas. Edison agreed to hold exclusive talks with 2i Rete Gas until 20 November. E2i Energie Speciali, has sales of 130 million euros and an ebitda of 82.6 million. Infrastrutture Distribuzione Gas has sales of 37.4 million, an ebitda of 12.9 million and net cash of 3.7 million.

Amissima, an asset in which Apollo Global Management in 2014, attracted the interest of  Cinven, which may table a bid for Amissima Vita, and of HDI that aims to buy Amissima Assicurazioni (See here a previous post by BeBeez). Equita and Kpmg are handling the sale that may start by the end of September and the beginning of October. Apollo may reinvest for a minority of the insurance company that paid 310 million in 2014. In March 2016, the fund subscribed a 52 million capital increase for the insurer.

Consultinvest is holding talks for acquiring Borgosesia, a Milan-listed real estate developer with special focus on repossessed real estate which used to be collateral for now defaulted loans (see here a previous post by BeBeez). Consultinvest acquired 51% of Multilife, an insurance company. Consultinvest has assets under management of  2.5 billion euros. Borgosesia’s equity is worth 26.9 million, net profits of 2.7 million, a turnover of 14.5 million, an adjusted ebitda of 5 million, and a net financial debt of 3.9 million.

Add Value, a portfolio company of AVM, is looking for investors in Neurala and Wider (see here a previous post by BeBeez). Neurala is a provider of AI solutions for the visual inspection sector that attracted investments from venture capital funds Pelion Venture Partners, 360 Capital Partners, TechStars, Indinvest Partners, Draper Associates, Motorola Solutions, Sherpa Capital, and Haiyin Capital. Neurala has sales of 4.3 million US Dollars and raised 5.1 million out of a round of 12 million. Milan-listed Antares Vision invested in the business which is also holding talks with an Italian private equity for an investment of 1.1 million. Wider is a producer of super-yachts with hybrid motors that Exa acquired between 2013 and 2017. In 2019, Nautical Hybrid Tech acquired Wider. The company aims to raise 4.5 million euros through a club deal and for investing one million for buying out a minority shareholder and the rest in its organic development.

Albacore sa, a Swiss multi-family office , rebranded as Alvarium Investment Managers Suisse (see here a previous post by BeBeez). The company’s organization is unchanged and Francesco Fabiani will keep his ceo role. In November 2018, Alvarium Investments acquired a minority of Albacore. Since July 2018, Alvarium attracted the investments of Dilmun Capital (40%) and Peterson Group (35%). Alvarium has assets under management for 18 billion euros.

Marzia Bartolomei Corsi is a new partner of Fondo Italiano d’Investimento (FII) (See here a previous post by BeBeez). Corsi previously worked as investment manager for Consilium where she concluded buy outs of companies with turnover of 20 – 100 million euros. The manager will now report to Aldo Di Bernardo and Gianpaolo Di Dio.