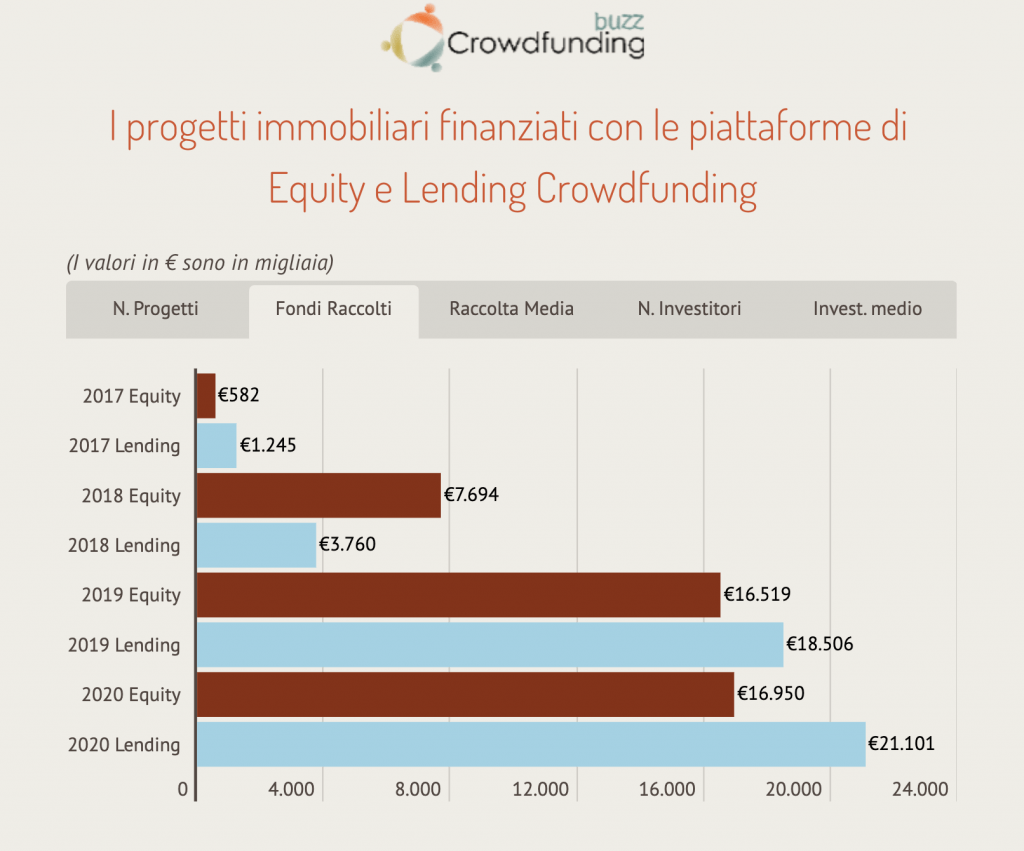 Since 2012, real estate crowdfunding platforms have allowed to raise in Italy 72 million euros through 219 campaigns, according to the data of Real Estate Crowdfunding Report 2019, a publication of Milan Polytechnic University, Walliance, and law firm DWF Italy (see here a previous post by BeBeez). CrowdfundingBuzz previously spotted such a trend earlier this year and highlighted that 12 equity crowdfunding campaigns allowed to raise 16.95 million and 99 lending campaigns for 21.1 million.

PMI Top, a private capital investment holding, recently launched on Opstart its third equity crowdfunding campaign for raising 0.1 – 5 million euros on the ground of a pre-money value of 5 million (see here a previous post by BeBeez). The company is selling a stake of up to 50% while investment tickets amount to up to 1,000 euros. The company already already raised 0.14 million. The campaign will end in mid-November 2020. Davide Cigolini and Alessandro Tesio lead the company and own minority stakes of the business. Further shareholders of PMI are Directa Sim (22.15%), Diego Zanchi (8.85%), Alessandro (8.85%) and Giovanpaolo Arioldi (8.66%). The firm previously raised 30,000 euros on Opstart through a campaign that Directa sim wholly subscribed, while at the end of july it attracted investments for one million.

Moneyfarm, the Italian fintech scaleup for the digital management of savings, launched Moneyfarm Score, a model for forecasting the value of transfers for football players (see here a previous post by BeBeez). Paolo Galvani and Giovanni Daprà founded Moneyfarm in 2011. The company attracted investments for 110 million euros (a 40 million round in September 2019 that Poste Italiane led and that Allianz Asset Management joined). In October 2017, Moneyfarm acquired London-based Ernest, a company that Cristoforo Mione, Lorenzo Sicilia and Niall Bellabarba founded in 2016. In November 2018, Moneyfarm acquired Germany’s Vaamo.

On 7 September, Monday, H-Farm opened its Campus for entrepreneurs and students (see here a previous post by BeBeez). Ca’ Tron – H-Campus, a real estate investment vehicle of Finint Investments that attracted the resources of Cattolica Assicurazioni (60%) and CDP Investimenti  (40%). The project’s value is of 101 million. In late August, H Farm said that it will launch a capital increase of 10 Million and the issuance of a convertible bond of the same value for developing the education sector of the Campus

Media company The Hundred and the Italian influencer Tommaso Zorzi founded The House of Talent (HOT) (see here a previous post by BeBeez). HOT will finance Zorzi’s media contents and it will belong to The Hundred (20% that could increase to above 45% through a capital increase). HOT also attracted the resources of Aldo Maccari. Vincenzo Macrì, Marino Giocondi and Leonardo Bongiorno founded The Hundred.

LIFTT and Finde Holding evenly subscribed a one million euros round that Corion Biotech, an Italian pharmaceutical startup, launched (see here a previous post by BeBeez).  Corion was born in 2012 as a spin-off of Turin University. Tullia Todros and Alessandro Rolfo head the research team. In 2015, the startup attracted an equity investment of 0.15 million euros from Finde, whose ceo is Michele Denegri.

Milan-listed Digital Magics invested in Slidinglife, a company that Massimiliano Arena founded in 2017 and that received the award for the best Italian legaltech in 2019 (see here a previous post by BeBeez). The company will invest the undisclosed proceeds in developing further proprietary products.