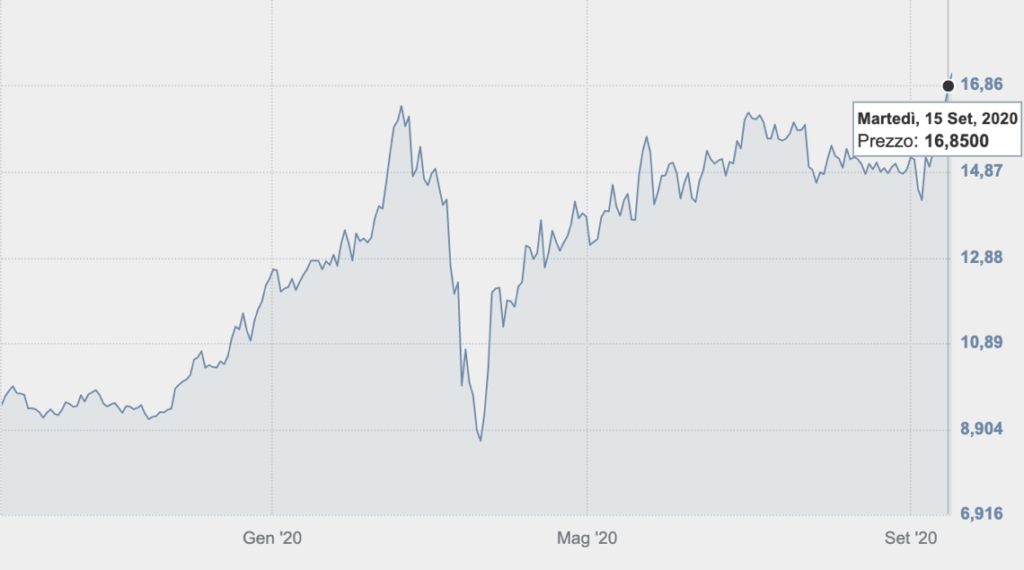 At the closure of trading of 16 September, Wednesday, the shares of Milan-listed paytech Nexi were worth 17,14 euros, up 1,72% for a market capitalization of 10.8 billion euros (see here a previous post by BeBeez). The expectations of a merger with Italian competitor Sia, a company of which Cdp Equity has a controlling stake, boosted the shares price of Nexi whose ceo Paolo Bertoluzzo would keep his role. Sia reportedly hired JP Morgan as financial advisor for a dual-track IPO. Nicola Cordone, the ceo of Sia, said that the company could raise 1 billion with a listing through a capital increase and shares sale for a market capitalization of above 4 billion. As BeBeez reported in May 2019, Sia has an equity value of 2.4 billion (12.5X ebitda) and an enterprise value in the region of 3.2 billion.

Italian mid-caps may receive support from government-sponsored Fondo Patrimonio Pmi until the end of 2020 (see here a previous post by BeBeez). The fund will subscribe bonds and other debt instruments of firms with sales of 10 – 50 million euros that launch a capital increase of at least 0.25 million, said Invitalia’s ceo Domenico Arcuri. The companies that require this kind of support may have recorded an annual drop in revenues by 33% between March and April 2020. FPPMI will subscribe newly issued debt instruments for a value matching the lower figure between three times the amount of the capital increase and 12.5% of revenues 2019.

Between 21 September, Monday, and 7 October, Wednesday, Milan-listed NB Aurora will issue new shares at a price of 10 euros for a capital increase of up to 150 million euros (see here a previous post by BeBeez). The company is issuing such shares at a price with a 2.6% discount compared to 1H20 Nav of NB Aurora that amounts to 10,26 euros per shares.  Proceeds will be used to fund further mid-market private equity investments.

On 8 September, Tuesday, the shares of troubled Italian e-retailer ePrice were worth 0.0659 euros, down 4.08% after the closing of a 20 million euros capital increase (see here a previous post by BeBeez). The company listed on Milan market in February 2019 at 6.75 euros per share and an initial market capitalization of 279 million euros. During the capital increase offer (3 August – 9 September 2020), investors subscribed 71.15% of the shares on offer for a value of 14.23 million. The company’s shareholders subscribed 25.42% of the unsubscribed shares for a total value of 5.08 million. The turnover of ePrice amounts to 130.57 million, an adjusted ebitda of minus 13.17 million, net losses of 41 million, and a net financial debt of 6.87 million.

Once completed the due diligence, Blue Skye will act as white knight for Perini Navi whose current majority owner is the Tabacchi Family (see here a previous post by BeBeez). Perini reportedly held talks with Italian competitor Cantieri Sanlorenzo, who tabled a too low offer. Fabio Perini founded the company in 1983. Perini Navi has sales of 65.5 million euros, an ebitda of minus 4.25 million, losses of 8.3 million, and a net financial debt of 26.42 million.

Tamburi Investment Partners (TIP) will invest 50 – 100 million euros in Itaca Equity, a vehicle for investing in distressed companies (See here a previous post by BeBeez). Itaca Equity will look at special situations and act as advisor, restructuring manager and equity provider without acquiring NPLs or UTPs. TIP will own 40% of Itaca while Sergio Iasi, Angelo Catapano and Massimo Lucchini who will hold 60%.

Cmc, an Italian producer of packaging machinery, hired Alantra for finding a partner (see here a previous post by BeBeez). Cmc belongs to Giuseppe Ponti and his kids Francesco and Lorenzo. The company has sales of 61 million and an adjusted ebitda margin of 16%.

HIG Europe acquired the majority of DGS, an Italian Information Technology player (see here a previous post by BeBeez). Vincenzo Fiengo and Salvatore Frosina, the company’s founders and ceos, sold their stakes and reinvested for a minority while keeping their operative roles. UBI Banca, Banco BPM, Intesa Sanpaolo, Deutsche Bank, and Springrowth financed the buyers. DGS has sales of above 115 million euros.

Allianz aims to sell a portfolio of insurance prizes and pension products (see here a previous post by BeBeez). Morgan Stanley is handling the process. The porfolio generates prizes for 9 billion euros and Allianz may fetch about 500 million out of its sale.

On 11 September, Friday, Borsa Italiana received the non-binding offers from Euronext-Cdp Equity, Deutsche Borse and Six (see here a previous post by BeBeez). London Stock Exchange may sell Borsa on the ground of an enterprise value of 3.3-4 billion euros or 62.5% of MTS the platform for trading bonds which is worth 600 million. CdpEquity-Euronext may involve Intesa Sanpaolo and F2i. Deutsche Boerse may ally with Allianz and Unicredit, while Six is holding talks with Investindustrial.

British private equity Cheyne Capital acquired Irplast, an Italian packaging company (see here a previous post by BeBeez). Fausto Cosi (ceo), Luca de Bartolo (coo) and Gabriele Corradi (chairman) will keep their roles, while Matteo Canti will join the board of directors. Irplast has an enterprise value of 100 million euros and recently implemented a debt restructuring as AMCO acquired from Prelios Credit Servicing the company’s debt with lenders Mps, Bnl, Banco Bpm, BPER, Credit Agricole, Unicredit. Irplast has a turnover of 97.1 million with a 10% ebitda margin and generates abroad 75% of its sales. Jonathan Lourie (ceo and cio) and Stuart Fiertz (chairman) founded London-based Cheyne Capital and in June 2019 raised one billion for Cheyne European Strategic Value Credit Fund. In October 2018, Cheyne Capital tabled an unseccessfull bid for Pasta Zara that is now in receivership and attracted 118 million from competitor Barilla for its plant in Muggia.

Enel X, part of Enel, and Ardian signed a joint venture for developing energy storage systems in Canada (See here a previous post by BeBeez). Ardian Infrastructure will have 80% of the jv

F2i aims to raise 1.5-2 billion euros for its fund (See here a previous post by BeBeez). Renato Ravanelli is the ceo of the fund that belongs to 19 financial services firms and to Cassa Depositi e Prestiti (14%). F2i recently simplified its governance procedures.

On 16 September, Wednesday, the shareholders of the Spac Life Care Capital (LCC) will hold a meeting for deciding whether to dismiss the firm after having called off the business combination with Italian biotech Biogenera at the end of June (see here a previous post by BeBeez). Meta Ventures, Italian Angels for Growth (IAG), the Emilia-Romagna Region and founders Andrea Pession and Roberto Tonelli own in the region of 85% of Biogenera. Carlo Castellano, Alessandra Gavirati, Luigi Sala, Jody Vender, and Techwald created Milan-listed LCC in March 2018 after having raised 140 million euros.

Macquarie will sweeten its binding offer for 50% of OpenFiber, an asset of Enel, on the ground of an enterprise value of 8 billion euros (6 billion of equity value) (see here a previous post by BeBeez). The Australian fund will send its offer to Enel between 18 and 22 September, Friday and Tuesday.

Intermediate Capital Group (ICG) opened a bureau in Milan and appointed Luigi Bartone as the head of ICG Italy and Giulio Piccinini as coo (see here a previous post by BeBeez). ICG is a London-listed private capital operator with 45.6 billion euros of assets under management. Bartone, an INSEAD alumnus, joined the company in 2004, after having worked for AT Kearney. Piccinini, a New Yourk University MBA alumnus, is in ICG since 2017 and previously worked for Vision Capital, Bank of America Merrill Lynch and Bain & Co.

Ardian reached the final closing of 2 billion euros for Ardian Expansion Fund, whose head is François Jerphagnon (see here a previous post by BeBeez). Further to financial firms, the managers of the portfolio companies poured 5% of Ardian Expansion’s resources. The fund will target minorities and majorities of mid-market companies based in France, Germany, Italy, Belgium, Austria, Switzerland, Spain, and The Netherlands. Ardian Expansion has three Italian companies in its portfolio at the moment: Algo, F2A and Corob.

The troubled Italian fashion company Stefanel attracted two binding offers from undisclosed bidders (See here a previous post by BeBeez). Extraordinary commissioner Raffaele Cappiello is handling this sale. One of the bidders is only interested in Stefanel, while the other aims to buy Interfashion as well. The company has a net financial debt of 96.5 million euros. Stefanel is in trouble since 2016 and in September 2017 attracted the investments of Oxy Capital and Attestor Capital that subscribed a 10 million capital increase and acquired 71% of the business, while Giuseppe Stefanel kept a minority.